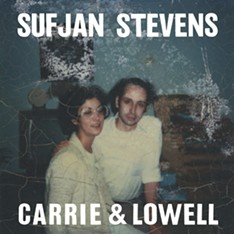 Greetings, music fans. We have an extra-long New Tunes Tuesday post for you this time around thanks to the oodles of great music being released this week, so let's dig in.

In the singer-songwriter world, a biggie out today is the new album from New York singer-songwriter Sufjan Stevens. Fans of Godspeed You! Black Emperor will probably recognize some of the music on their latest release, Asunder, Sweet and Other Distress, since the Canadian post-rock band used to play it live on tour (back then it was informally titled Behemoth).

Lower Dens, Escape From Evil
"To Die in L.A."