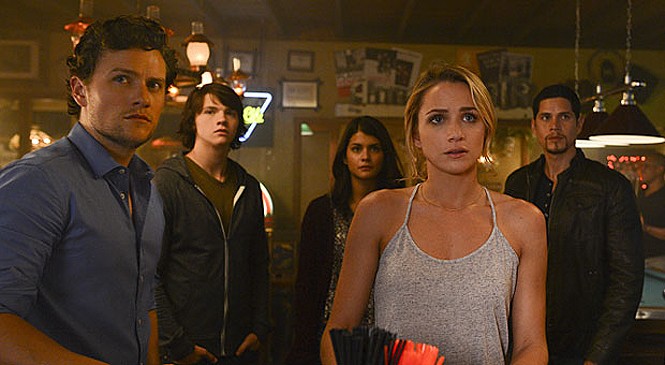 Whats new on the tube tonight:

The Messengers (The CW) Series Debut: What’s been missing from The CW’s increasingly superhero-y and supernatural lineup? Angels! Your collective “meh” can be heard all the way to Heaven. Anyway, with little network fanfare, here’s The Messengers, wherein impossibly pretty actors fret about the Rapture and their desolate Friday-night timeslot. If you liked HBO’s The Leftovers and Syfy’s Dominion … maybe just wait for those to come back.

Bitten (Syfy) Season Premiere: Laura Vandervoort (Smallville) didn’t make much of a first impression in Bitten‘s 2014 debut as a she-werewolf just trying to make it on her own in whatever big city Toronto is supposed to pass for onscreen. She was all blond hair and blank stares, with none of the edge or humor that made surrounding Syfy hits like the late Being Human and the soon-to-be-late Lost Girl click—but she did get naked frequently, so there’s that. Season 2 looks to be more of the Twilight-adjacent same, as her ambition to break free from her beardy, mansplaining kin is further hampered by the arrival of ... witches. Did we learn nothing from True Blood?

Lost Girl (Syfy) Season Premiere: On the downside, Season 5 will be the last for Canadian import Lost Girl. On the upside, the sexy supernatural soap’s final ride will consist of 16 episodes, bringing the total number of Lost Girl episodes to 69, a figure that succubus Bo (Anna Silk) and her quippy sidekick Kenzi (Ksenia Solo) would find hilarious—if Kenzi hadn’t sacrificed herself to the Underworld at the end of last season, anyway. Bo’s final mission is to bring her BFF back from the “dead,” which could prove difficult, as actress Solo is currently trapped somewhere at least as bad as Hell: AMC’s soggy period drama Turn: Washington’s Spies.