Saving Mojos, 2 weeks of events, and inspiration from Dusty Rhodes.

Hello to all you polka-dot-wearing, stratosphere-reversing, hit-making, record-breaking, back-cracking, liver-quivering, ring-dancing, American-Dream-loving enthusiasts! We're going to sidestep the locals for a minute, let the pro-wrestling geek inside me come out and talk about the legendary Dusty Rhodes, who passed away on Thursday. (And before you dash to the comments section: Yes, I know, it's pre-determined, that's not the point of this entry.)

If you have ever had any doubts that you could become something great, look no further than "The American Dream" Dusty Rhodes. No matter what era you look at, pro wrestling has always had a focus on physique; even if the guy in the ring was dumb as nails, if they looked like a major athlete and knew how to take their lumps, they were good to go. By that factor alone, Rhodes shouldn't have been a success at all. He was a tad overweight, with blonde curly hair that didn't flow, sweated like he'd been in a sauna by the end of his matches, and was usually bloodied from the forehead. But where he lacked in certain areas, he excelled in others with his personality and his voice, being the greatest talker in the business (with only Ric Flair, Roddy Piper, and Jake Robers as competition for that title). He had the foresight to connect with people in a different way, rising up to be one of the greatest underdogs to grace the ring, and eventually a three-time world champion.

I'm short-handing and skipping minor details along the way here, but the point is that he was able to take what was given to him and become the embodiment of his moniker, The American Dream, overcoming the odds and expectations set before you to become greater than anyone ever thought. If you ever need inspiration that you can do better than you ever thought, look no further than Dusty Rhodes. 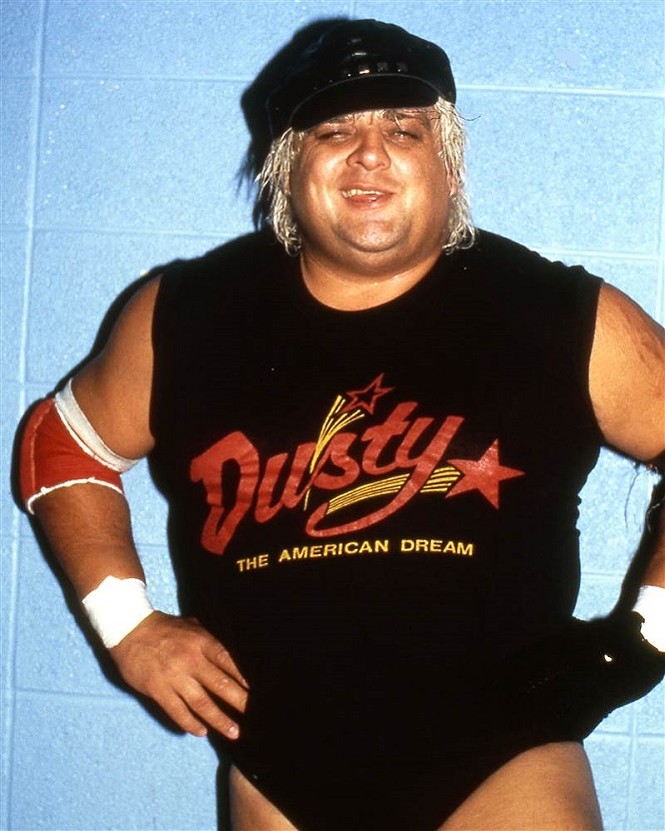 Before we get to events, if you haven't heard the news from Ogden's music scene yet, the one good all-ages venue in the city is possibly going to end up homeless in a matter of months. Mojos has become a staple of the community for the past decade, as you can read in this interview I did with the owner back in 2014. Over the years, that section of town has gone from being rundown and overlooked to being a central hub of activity, so much so that property is being snatched up left and right to redevelop or cash in to sell to bigger businesses. Or as we've come to know this game in downtown SLC, Monopoly: Gentrification Edition. Mojos' landlords, being landlords who can only see green, have basically said they're eventually selling the property out from under them, kicking them out unless they can buy the property—at a staggering $550,000! The venue has started a "Save Mojos" movement, and launched a GoFundMe campaign, but like many campaigns it is nowhere near what they would need.

Aside from a couple of infrequent venues, this is the only constant all-ages music venue Ogden has to offer. It is what Kilby is to SLC and what Muse Music and Velour are to Provo, and if it goes away, there's a large college and under-18 audience that will have no year-round location to see local music in their hometown. So, as someone who covers local music frequently and as a supporter of all things local, I'm calling out the entire Utah music community. Not just Ogdenites—to anyone (which is most everyone) who has ever played a show for a room of kids who scraped up $5-10 to see you play live because you were the highlight of their month... Get off your asses and go support Mojos.

Getting to events, on Sunday June 14, the Urban Flea Market will hold their monthly event in the downtown parking lot at 600 South and Main Street. Grab your fancy items going to waste and head over to see what you can trade your stuff in for, or if you might be able to find that certain something that's eluded you. More than 80 vendors will be on hand with random items for you to check out; head on over, and don't forget your hat for the blazing sun.

The majority of this week is filled with concerts, so let's focus on the big one: Crucialfest. Taking over Area 51 all three nights with some bonus showcases at Urban Lounge, this is SLC's answer to SXSW, only with lots of rock and metal. Seriously, if you haven't been to these concerts, you're truly missing out as you're getting double-packed lineups that take over stages for hours and feature a lot of acts who normally don't play together on a regular basis. Not to mention the out-of-town names that come support the show and what it's doing. Visit their website for full lineups and ticket prices.

Also on June 18, FantasyCon may not be returning until next year, but their film festival is! FilmQuest will be taking over parts of the Gateway Megaplex Theater to show independent films of the sci-fi and fantasy variety. A lot of these come from around the country, but there a couple of local submissions in the bunch. Visit their website for the complete showtimes and ticket prices.

Last month we had a chat with the people behind The Bee; go read that article to get more info on what they're about. Now they're back at The Leonardo for this month's showcase. This time around, the randomly-selected group of performers will be talking about "The Wild."  Tickets to the event are just $7.

On June 19, Channel 801 will make its return with a show at 50 West. This is a chance for local filmmakers to show off their short films in an environment where you can eat, drink, comment and support their work. This is one of the few occasions it hasn't been held in a theater, which should add an unexpected element to the showcase. Check out their Facebook listing on the event for more details.

Skipping along to June 24, Dungeons & Comedy will make their monthly return, this time at The Loft in Ogden. This is a chance for you to see comedians play their own version of D&D while performing standup comedy for you. Hosted by Nic Don Smith, this month he'll be joined by Travis Neal, Jeff Watson, Steve Uribe and Guy Seidel. These are really cool shows that you should be checking out, and for the totally cheap price of $5.

Finally, on June 25, the Utah Arts Festival will take over Washington Square and the Downtown Library for four days, bringing you some of the best art, music, film and other surprises they have to offer. Every year the festival seems to expand in new ways, and by all accounts, there's some cool stuff being planned that will raise a few eyebrows. Check out their website for full details and ticket info (and watch for City Weekly's cover story on June 25).

As for the blog, we've got a variety of summertime things coming down the pipe, but we'll be keeping it a secret so you have to come back every other day to check it out. As always, we'll see what happens.