Gyll Huff, the Artist Who Found His Medium | Buzz Blog

Gyll Huff, the Artist Who Found His Medium 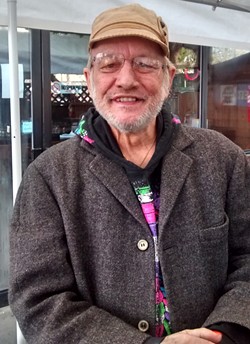 It was with a great deal of sadness and shock that I learned Gyll Huff was found dead in his home July 10.

Gyll was a dear friend and sometime co-conspirator of mine. It's hard to believe that this man is dead. I was gonna say, "I've known him for most of my life," but that seemed so maudlin and overwrought. He would have made a good joke about it. But I did the arithmetic and found it's true: Gyll has been a part of my life for 64 percent of my lifespan.

I met Gyll when I was a teenager. It was the '80s; I was alienated—what else could I have been as a teenager in the '80s?—I felt like an outsider in my own community. I felt I was too weird even to be among the freaks of society. Gyll was truly the first person I ever met who let his own freak flag fly, and who even invited me into his crazy, creative, brilliant world. I realized then that it is possible to live your own life on your own terms, and that revelation made a huge impact on my psyche. Ever since then, I've done my best to live up to Gyll's example, at least to the extent I've been capable.

Gyll was one-of-a-kind and a sort of mad genius. In Mondo Utah, filmmaker Trent Harris described Gyll—to the best of my recollection ... my eyes are so blurry at the moment, I haven't been able to locate my copy of the book on its shelf—as "an artist without a medium."

Which is the perfect epigram—and possibly epigraph, epithet and epitaph—for Gyll. He lived his life as an artist true to his vision, even though it seems the state of the world and technology and art has still yet to evolve sufficiently to offer the substance that would allow Gyll fully to express that vision.

I'm gonna say Gyll was an artist, and his medium was Life. One of my favorite City Weekly cover stories was Shane Johnson's  "Extremist Makeover." I have an enormous blown-up poster of John Kilbourn's (award-winning) cartoon cover illustration hanging behind my desk at work—it features camped-up caricatures of Gayle Ruzicka, Chris Buttars and LaVar Christensen. Gyll Huff and Walter Larrabee both graciously agreed to talk to Shane for this story.

Shane showed them images of the three anti-gay firebrands, and asked them to offer a campy, off-the-wall "Queer Eye for the Legislative Guy" makeover. I had the feeling that Shane wasn't accustomed to dealing with such, ahem, colorful individuals—he mostly wrote hard-hitting, well-reported stories about crime, corruption, government policy and the law—but to his credit, he was game. After Gyll and Walter left the CW office, he and I had a Q&A during which I offered to explain what "crinolines" are, and the fact that all chaps are assless—otherwise, they'd just be pants.

Above is a photo I took the last time I saw Gyll. It was April 1, 2015. April Fool's Day, which somehow seems like a holiday appropriate for a final meeting between Gyll and me. I loved Gyll, and he taught me a lot about the artistic medium of Life.

A memorial service is still in the planning stages. Updates will come as they are available.