The blazing heat that's nearly melted all the synapses from my head finally decided to take a slight breather—and just in the nick of time, as we got a mildly chill Friday for the latest Salt Lake Gallery Stroll. This month, I made my way over on the east side of town to Nostalgia, where—among the coffee-drinkers and chess-players—we got to see the works of Orem-based tattoo artist and illustrator Daniel Duckett. Today, we chat with Duckett about his career and works, as we browse through his artwork that will be on the walls of the downtown hangout for the next month.

Gavin: Hey Daniel, first thing, tell us a little bit about yourself.

Daniel: By my own standards, I would say I’m a local artist starting out. I apprentice out of Arcane Art Tattoo in and have been pursuing art seriously for about two years now.

Daniel: I remember constantly drawing on my homework and class assignments when I was younger; I suppose at the time, inventing my own worlds and rules to govern them was a way of maintaining a sense of control in my life. Growing up, I had access to a terrific store of books, and I remember being both terrified and mesmerized every time I opened a certain hardback containing pieces by Hieronymus Bosch and Pieter Bruegel the Younger.

Gavin: You attended Utah Valley University. What made you choose them and was their program like?

Daniel: I was sitting in a jail cell when I had the strong desire to study music. Growing up without a music education and having no idea what I was in for, I immediately signed up for courses at the local college. Not-so-romantically, UVSC was the closest and most affordable option to me at the time. Unfortunately, I ended up dropping out after completing all their music courses; however, it wasn’t a total loss. I had a saint-like English professor who introduced me to literature, and possibly more importantly, I learned how to live for a subject, how to self-discipline, and the rigorous practice it takes to become synchronized with your craft and create.

Gavin: What led you into doing tattoo work, and how was it learning the trade?

Daniel: My relationship with art has always been very touch-and-go. I had a few friends suggest I start tattooing. I liked the idea of a new and thought that it could open a few doors for me if I wished to realistically pursue art, especially the genre that I so often find myself generating. Learning was and is still fantastic. I think the finality of the trade has pushed me to develop a cleaner style, and my mentor has always been patient with my many questions and eagerness to progress to the next step.

Gavin: Currently you work over at Arcane Art Tattoo. How has your time with them been like?

Daniel: I am actually apprenticing under shop owner Kris VanLeuven. He took me in about a year ago, and I’ve been working alongside the other artists for roughly seven months now. It’s been really great; the shop Kris created is really clean, very professional, and the atmosphere couldn’t be more casual. It has without a doubt been the most rewarding time I’ve ever spent in a work setting.

Gavin: What made you decide to keep doing illustration on the side, both as a hobby and freelancer?

Daniel: Unfortunately, when an image or concept appears in my mind, it is mostly distorted, even opaque in design, and in milder forms I find it extremely difficult to concentrate on much else until I have produced at least a crude drawing of it.

Gavin: What's the process that goes into making a piece, from the concept to final design?

Daniel: Usually I’ll have an idea, or an image appears to me; I’ll scribble up a few thumbnails, play with the composition a bit and choose the most striking of the drawings. At this point, whether it’s the attire, anatomy or environment, I’ll research the material and attempt to apply at least the frame of those notions in a photo session. Not long after that I will render out all the values and problems I may have while painting in the drawing, and either use that for a reference or transfer the framework of the drawing to a board/canvas and begin painting.

Gavin: Being a tattoo artist, do you have this sense of seeing a design all the way through from the initial idea, or do you take some liberties and play with your art as it goes?

Daniel: I like homework, and try to work all of the problems out on paper before touching the skin. Of I’ll have a few backup plans, but for the most part I try to leave little unsaid before even setting up for a tattoo.

Gavin: How was it for you breaking into the Provo art scene and having your work shown around town?

Daniel: Luckily, I am from Provo, and could not thank my friends enough for the support that the type of art I create needs. 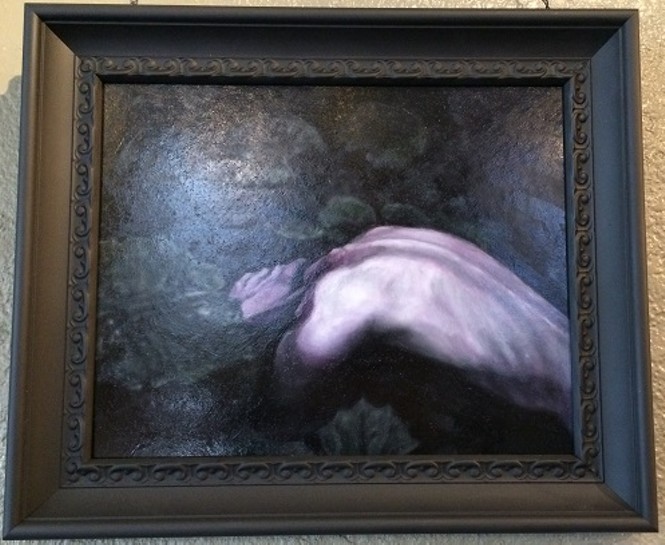 Gavin: The work in your illustrations and designs tends to stay very intricate, even with pieces that look quickly drawn or sketched. How was it for you to as an artist to hone that skill and put so much depth into simple items?

Daniel: At times I think it may be a disadvantage. Obsessing over every little detail is something that comes quite natural to me, and stylistically a trait that I am trying to let go of in my more recent work.

Gavin: Tell us about the works you have on display for this month's Stroll.

Daniel: The breadth of Nostalgia's walls are impressive to say the least. This month is my humble attempt to cover them with works of mine spanning the past two years.

Gavin: How has it been working with Nostalgia and being displayed here this month?

Daniel: It’s otherworldly to say the least. Zara Cardenas is their Art Curator, and has been nothing but patient with me, and from the first day I have heard nothing but praise.

Gavin: What are your thoughts on the current state of the SLC art scene?

Daniel: I’m fairly new to the scene, and so far from what little I’ve seen I’m very optimistic. The immense level of acceptance here is new to me, and it’s humbling to have met so many talented people in such a short amount of time.

Gavin: Who are some local artists you believe people should be checking out?

Daniel: Patric Bates has been a long time inspiration for me, and truth-be-told I stalk Casey Childs from time to time and hope to attend his open house painting nights sometime this year.

Gavin: What else do you have planned over the rest of the year?

Daniel: I’m quitting my day job next month, tattooing full-time and pursuing art from my home studio. I will be back in Provo next month at a fundraiser for Provo Pride, then Juice & Java’s artist in October.