While the comedy scene may be dominated by open mic nights at the moment, there have been a few showcases during the past year or so where there's a specific theme behind the show. These enhanced showcases give standup comedians a chance to branch out and take on new challenges to improve their comedic chops. One of the more popular local comedy events is Dungeons & Comedy, a monthly showcase where comedians play a hilarious version of D&D, followed by comedic sets from everyone involve we chat with the men behind the show, Aaron Orlovitz and Nick Don Smith, before their next showcase Thursday, July 23 at Mo's Diner. (All pictures courtesy of D&C.)

Gavin: Hey Nick and Aaron, first thing, how have you both been since we last chatted?

Nick: Roughly, about the same. I'm not sure that's an improvement. I think I'm fatter.

Gavin: What’s new with both of you as far as your standup careers?

Nick: I don't know. I don't think I have a career. It's more a thing of desperately flailing around, like a drunk hobo battling a hail storm in gale-force winds with a tattered fly swatter in each, gnarled fist. Now that I have full-time employment, I've been saving my money so I can do some comedy festivals and competitions out of state. I think I'm ready to stretch out a little.

Aaron: I’ve been branching out a little. I’ve been trying to write some new stuff, but it has been slow going.

Nick: The now defunct 5 Monkeys bar held a comedy competition in March of last year. That's the first time I had ever seen He caught my eye because he was funny and had really original material. He stepped out for a much-needed smoke, so he didn't witness the train wreck that was my set. I was met by heckles and jeers from a hostile audience. Afterward, I got a chance to speak with Aaron and I invited him out to the other open mic. Our friendship has just sort of developed organically. We share a lot of common interests, like table top role-playing games, metal music, reading, and delving into history and religion. We also share a similarly bleak outlook on reality.

Aaron: What Nick isn’t telling you about that show is it was my first real set, and that it was my co-workers heckling him. I apologized to basically everyone at open mic that week; I almost didn’t show up. I thought my co-workers rudeness had made me a pariah in the comedy scene before I had even begun! Nick's gracious acceptance of my apology and encouragement prevented me from quitting before I even started.

Gavin: How did the idea for Dungeons & Comedy come about?

Nick: I was inspired by Jason Harvey's Comedy and Other Opinions show. His show is set up to have 3-4 comedians perform. After each comic completes their set, he joins then on stage and asks them ridiculous questions. It's a way to let the comedians stretch their improv muscles and make amusing, off-the-cuff remarks. I knew that if I was going to do a show, I wanted similar elements. I had a huge amount of fun role-playing with my friends growing up. They are incredibly funny and creative people, and some of the most riotous bouts of laughter came from the insane shit we'd come up with during our table top role play adventures. I figured handing character sheets and dice to comedians and letting them cut loose would be very entertaining, and a great way to showcase their natural comedic talents. I went with Dungeons & Dragons because it's by far the most widely-recognized table top role play game in North America. 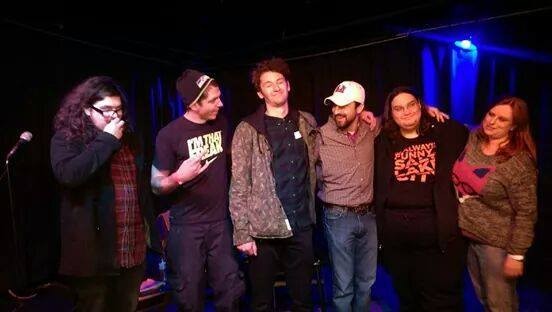 Gavin: For those who don’t know the format for the show, how does the evening play out?

Nick: It begins with the host (Aaron or I) warming up the crowd. The host then introduces the Dungeon Master and then brings up each comedian, one by one. After that, dice and character sheets are handed out and the DM takes over. Hilarity ensues. We usually try to keep the game down to 35 minutes or so. Sometimes it goes longer. Afterward, we let the comedians come up one by one and do their written material. We usually give each comic 10-15 and the headliner up to 30 minutes.

Gavin: Each of you take turns being the DM. Is there anything each of you likes to do differently than the other to make each evening different?

Nick: The adventures I write up are invariably filthy. I also tend to let the dice take over too much, instead of just allowing the chaos and madness to take over. I think Aaron's much more practiced at it than I. But I'm taking notes and trying to sharpen up my skills.

Aaron: I try to infuse my games with some social commentary. I find my games go off the rails quicker than Nick's, and I tend to be a little more free-form than Nick.

Gavin: How do you go about deciding who will take part in the show?

Nick: I get approached a lot by other comics who want to do the show. I ended up booked way out, so unfortunately, Aaron hasn't had a chance to put in much input on the lineups, and that's something I want to change ASAP. He's my partner, not a sidekick. I try to make sure that the majority of the comics that end up on the show are working hard and showing promise. I usually approach the headliner myself. I always like to try and make sure that the show has a strong headlining comic.

Gavin: What have been some of your favorite sessions since starting it?

Nick: The August show last year was great. That had Michael Moon, Dustin Hagen, Christopher James and headliner Jackson Banks. [Banks] had that Provo crowd eating out of his long, wizard hands. Thus far, he has done the longest headlining set in D&C history, over 37 minutes. The November show with Jonathan Falconer, Patrick Ramirez, Arthur Carter and headliner Levi Rounds was awesome. The Anniversary Show has been my favorite thus far. The one that will always hold a special place in my heart is the third show. It's when I finally introduced the full-on format of the show with the Dungeons & Dragons game, etc. I just wanted to see if I could even get people out to a comedy show out in Provo in the beginning. The 3rd show featured Brian"BEMO" Moore, who is an old school Dungeons & Dragons player. We also had Taylor Hunsaker and Aaron Orlovitz, and headliner Abi Harrison. It went really well, and convinced me that I had stumbled upon something really special.

Aaron: The one-year anniversary show was pretty awesome. I had a lot of fun. Dustin Hagen returned as one of our players and spent the majority of the game transformed into a tiny murderous horse!

Gavin: Are there any plans to change it up and pull an “upgrade” like the real D&D, or are you guys happy with the format so far?

Nick: So far, so good. We have some ideas for special edition shows. Over all, I think Aaron and I have a good thing, but I'm sure things will be tweaked and altered as time goes on.

Gavin: You recently celebrated the 1-year anniversary of the show. How has it been succeeding where a lot of planned comedy nights usually fail?

Nick: I think in the beginning, it was my mad dog determination to get it up and running. I was mentally prepared for it to be a constant, unending uphill battle. I was doing a mature-audiences comedy show in a music venue in downtown Provo. How fucking stupid am I? Seriously. I also had unyielding support from Debbie Phillips and Darcie Roy, the proprietors of Muse Music, so that was a big help. And the comedians themselves. They always give it their all; even when they have no idea what the hell is going on, they make it funny and entertaining, and I am incredibly grateful for the outpouring of support and word of mouth. I also started doing the comedian bios and character sheets as a way to help promote the show and bring awareness about it, and also a way to make it special for each of the comedians. On the second show, I started giving each of the comics on the show their own, personal 20-sided die, and the headliner got a big, fat one. Greg Kyte headlined that show, and Rachel Jensen, Keane Clark and Natashia Mower joined him. That particular tradition has continued. I need to bring back the character sheets and bios. With Aaron's help, it will be faster and easier to do.

Gavin: Tell us about the show you’ll have coming up this week.

Nick: On Thursday, July 23 at 7:30 p.m. at Mo's Diner, I will be hosting and Aaron will be DMing. Joining us we have Rebecca Frost from the Hello Sweetie Podcast [Editor's note: daughter of City Weekly digital editor and columnist Bill Frost], who has serious nerd cred and makes good with the funny. We also have Alex Velluto and Jordan Makin, also dorks and deft with the joke making. Our headliner is Mr. Andy Gold, who is funny as all shit, has headlined Wiseguys Comedy Club on more than one memorial occasion, opened for several fantastic pro comedians, and hosts his own podcast, the Big Wet Podcast. However, he knows nothing of the ways of polyhedral dice and character sheets and experience points and magic missiles. But he'll be fine; he has his wits. I always like it when I have a comedian on the show who knows nothing of table top role play. It brings out a lot of natural comedy.

Aaron: I like it particularly when the comics have no idea what Dungeons & Dragons is.

Nick: Dungeons & Comedy will be returning to Muse Music in Provo on Saturday, Sept. 26. We're calling that show Dungeons & Comedy: The Shield Maidens of Stand-up and will feature Amerah Ames, Eileen Dobbins, Kristal Starr and headliner Melissa Merlot. They finally found a new location, and it's time we come home. We have wandered long enough in the waste lands. Also hopefully a Dungeons & Comedy podcast.

Aaron: In August we hopefully will be able to have it at my good friend Jason’s comic book shop in Kaysville, Hajomaje.