Also: Learning to Drive, The Visit 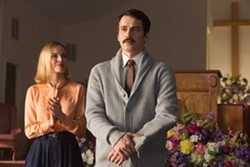 The September doldrums offers some suspense to go with a unique animated experience.

The film adaptation of the faith-based best-seller 90 Minutes in Heaven (pictured) actually feels more like a real movie than a lecture—but that doesn't mean it's a good movie. The Lion King director Roger Allers oversees a unique adaptation of Kahlil Gibran's The Prophet, but the energy here comes entirely from artists like Bill Plympton, Nina Paley and Tomm Moore illustrating the philosophical poems, rather than from the framing story.

Eric D. Snider praises the performances by Ben Kingsley and Patricia Clarkson in Learning to Drive, even if the story follows a familiar formula of People From Different Walks of Life Learning from One Another.

In this week's feature review, MaryAnn Johanson laments M. Night Shyamalan's new thriller The Visit as yet another example of the filmmaker not seeming to understand actual human behavior.

Also opening this week, but not screened for press: A Chinese student during the Cultural Revolution is sent to work with Mongolian herdsman in Wolf Totem; Sanaa Lathan begins to suspect that her too-good-to-be-true new boyfriend has issues in The Perfect Guy; and the Broadway Centre Cinemas presents its annual showcase of world cinema from developing countries, the Global Film Initiative.