Whenever someone creates anything funny, there’s always a chance for parody. While there have been a couple different takes on Jerry Seinfeld’s Comedians In Cars Getting Coffee, none as absurd and funny as the Utah spin on it: Comedians In Cars Eating Vegemite. Australian native and local comedian Rich Wilson grabs some of Utah’s funniest, sticks them in his camera-wired car and has them drive around West Valley City to try out the sandwich paste from his home country. Today we chat with Wilson about his career and the series. (All pictures courtesy of Wilson.)

Gavin: Hey Rich, first thing, tell us a bit about yourself.

Rich: I’m 35 years old, married with two kids, a carpenter by trade, and originally from Australia.

Gavin: What first got you interested in comedy, and what were your major influences?

Rich: I grew up watching a lot of comedy movies. Steve Martin’s The Jerk was one of my family’s favorites. I also watched a lot of British shows. The Young was great. It was so raw and ahead of its time. Our parents hated us watching it, but we always quoted it.

Gavin: What pushed you to eventually try it out, and how was it for you first starting out?

Rich: I always comedy. When I was a teenager, I read every biography I could find: Richard Pryor, Seinfeld, Jim Carrey, Robin Williams. For my 30th birthday, I wanted to stand up. I signed up and invited five of my friends to come. I thought I could just go up on stage and the comedy would come to me. I was so delusional. I told my wife, "What if I do so well they ask me to be on a show this weekend?" I then Googled, "How much money do comedians make?" The emcee called my name, and I walked on stage and experienced a feeling I would never forget ... total helplessness and regret. People who have attempted suicide by jumping off the Golden Gate Bridge and survived all have the same thought, "I wish I hadn't done that,” when they let go of the handrail. The light was bright, the room was quiet, and I was alone. It went badly. I had a few ideas but no jokes, no punch lines. It was five minutes in hell for the audience and me. I got off stage to my friends, who had nice things to say, but I knew the truth. I was so destroyed when we got home. I asked my wife if it was okay if I slept in my three-year-old son’s room. I needed to be with someone that didn't know how much I sucked. I had to lie down in his toddler bed with and felt defeated. That was five years ago, and I'm over it. It's hilarious to me now. Standup is a beautiful thing…instant, honest feedback. No BS. You're either funny or not, and I love the purity of it. I'm still not very good at it, but I love being around super-talented and creative comics at open mic night.

Gavin: What brought you to Utah from Australia, and how has it been living here?

Rich: My dad was an accountant for the LDS church. When I was 17, they moved us to Utah. I went to college and got married to a girl from Louisiana. People are so nice and outgoing in Utah that we had to stay. Utah is a beautiful place to live.

Gavin: How has it been for you coming up through the SLC comedy scene?

Rich: It was very intimidating at first. I’ve never been to prison, but I’m sure it’s a similar experience: You’re not quite sure how to handle yourself around others at first, but you’re sure you don’t want to get on anyone’s bad side. After showing up on a regular basis, I realized we’re all in the same and making friends became easy. I found that even the most intimidating comics in town are super nice.

Gavin: So what made you decide to do a parody of Comedians In Cars Getting Coffee?

Rich: I liked the casual vibe of Jerry Seinfeld’s show. Driving around with your buddies is as casual as it gets. I thought doing a similar show in the Salt Lake comedy scene could be something cool and different.

Gavin: Was the choice for Vegemite simply because of where you’re from, the taste, or the fact that Americans aren’t used to it?

Rich: ! Americans hate Vegemite. I thought adding the element of Vegemite to the original idea would give it an interesting twist. Taking naturally funny people out of their comfort zone and letting the comedy write itself appealed to me.

Gavin: How do you go about deciding who will be in the car each time?

Rich: I let the comics decide who they want to be on the episode with; have chemistry with works for me.

Gavin: What’s the response been like from both the comedians and the viewers?

Rich: Everyone who has seen the show seems to like it, which makes me happy. I’ve only received a little criticism. If I had a dollar for every time someone said, “I like the show, but that’s not how you eat Vegemite,” I’d have enough money to send Bill Cosby over to their house and teach them how comedy works. And yes, Bill Cosby is now doing private gigs for $3. 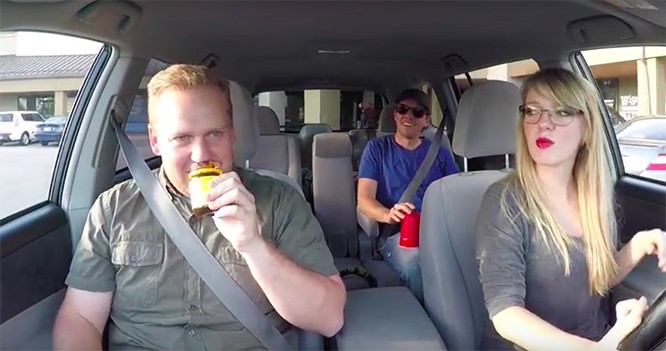 Gavin: Who are you looking to/hoping to get on the show in the near future?

Rich: Jackson Banks is one of my favorite comics in town. We are filming his episode this weekend with Ames, which I’m super excited about. I spend a lot of time at Wiseguys, so I’ve had a lot of those guys on the show, but I want to have comics from all over town, too.

Gavin: Are you looking to expand the series in any way or create a new one?

Rich: Eric Ripley, a hilarious comedian, is also a pilot. We’ve talked about making a "Comedians in Planes Learning to Fly” series. I also have been considering making a parody of Drunk  but mine would be “Drunk Church History.” It could be super funny, and I already have a few comics on board, but offending my family might not be worth it.

Gavin: What can we expect from you and the series over the rest of the year?

Rich: More Salt Lake comics on the show and perhaps a “Drunk Church History” series, and I’ll still be heading to open mics on a regular basis.