The three funny voices behind the latest SLC comedic podcast

We're in kind of an awesome time for comedy in SLC. Not just for the fact that you can see live shows almost every night of the week somewhere in town, but many of those comedians are branching out and doing their own side projects. Recording voices for books on tape, making bands, filming movies and TV pilots, and of course podcasting as Ear Whole Media has given many of those talents a place to boom. One of the more recent additions to the lineup is The Dirtpod Podcast. Created by Guy Seidel and featuring the one and only Marcus, as well as Allen Handy from KBER, the show is three guys sitting around and talking about whatever's on their mind—from comedy to music to random shit in their day. We chatted with the three of them about the show and where they hope it will go. (All pictures courtesy of Dirtpod Podcast.)

Gavin: Hey everyone, first off, tell us a bit about yourselves.

Guy: I am Guy Seidel, I am a comedian who lives in Salt Lake City, I like bikes and dogs.

Marcus: I'm a professional comedian and impressionist, have been for 10 years now.

Allan: I'm Allen Handy, the Allen part of The Mick and Allen Show from 2-6 every afternoon on KBER 101. We've been doing the show and having a lot of fun here in SLC since 1993. I'm also the on-court announcer/game show host/Jazz Bear punching bag at every home Jazz game at the Energy Solutions Arena since 2002.

Gavin: Guy and Marcus, what have you been up to since we last chatted?

Marcus: Writing and developing our live show and working on the new podcast.

Guy: The musical impression show we do has been doing well and getting a lot of attention.

Gavin: Allen, how’s the show been going for you and Mick at KBER over the past few years?

Allen: The radio show has been such an amazing experience. Mick and I have been able to meet and become friends with musicians and true rock stars over the years. We've also been able to help with and be a part of local and national charities and see numerous lives changed. It has truly been a fun ride!

Gavin: When had each of you met the others and become friends?

Marcus: I've known Allen for 12 years or so. Started hanging out and doing work with them, voices and what not, after my band played our final performance at a battle of the bands that KBER hosted and Mick and Allen judged. I needed a new gig; they gave me a place to do what I loved to do. I met Guy when I was on break from filming Last Comic Standing. I stopped by an open mic, he was on stage killing, so I asked him who he was and how long he'd been doing it, he said it was his first time, and we have been friends ever since.

Allen: I met Marcus years ago when Mick and I were judges at a battle of the bands competition and he was the singer of the band Rune. He was such a great entertainer and when we heard his amazing impressions we invited him on the air to do voices and be his hilarious self. Soon after it seemed we were introduced to Guy and had him on the show whenever we could as well. And there is an open door for them on the Freakshow anytime!

Gavin: Guy, when did the idea of starting up a podcast come about?

Guy: I have always thought it would be fun, but was very hesitant because everyone and their dog has a podcast, and I was never tech-savvy enough to get one off the ground.

Gavin: What made you decide to do more of a free-form conversation rather than planning for topics ahead of time?

Guy: It wasn't always this way for me. I did 4 or 5 episodes with local celebrities and artists, and it just didn't flow like I had hoped. I am not a journalist, so I wasn't great at keeping the flow going seamlessly.

Gavin: How were the first few episodes for you to record, and what were the biggest lessons you took from it?

Guy: Recording them was easy because I work with a producer in a real studio. I just show up and open my stupid mouth, Sascha [Blume] does all the real work.

Gavin: How did Marcus and Allen eventually come into the picture and become permanent fixtures of the show?

Guy: I had Allen and Marcus on as guests. We talked about music and it flowed so well, I had them back and again and again until we decided to make it a permanent thing.

Gavin: What made you decide to join up with Ear Whole Media at the start, and how has it been working with them?

Guy: I was a guest on another podcast and I expressed interest to the producer, Sascha, of doing my own and he booked me right there and then. Working with Sascha and Ear Whole has been great. He does all the work. 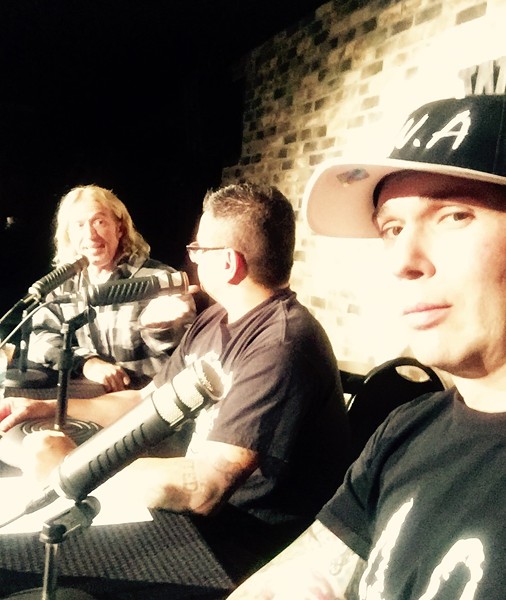 Gavin: How has it been for the three working together and creating new episodes whenever you feel like?

Allen: The podcast has been a blast! When we get together to record, I know I'm going to get my ab workout laughing! But then it becomes so much more. We all have such an interest in music and entertainment that talking about it for an hour at a time just seems to fly. It's fun to start with a topic of sorts and seeing where it goes and what it becomes. It's funny to hear that people enjoy the podcast so much because it just feels like we're hanging out in Guy's living room listening to tunes and laughing our asses off, and someone just happened to be recording it.

Marcus: It's awesome. I dig being able to sit down and bullshit with my buddies about stuff I like to talk about. The fact that we record it and people listen is an afterthought to me. I just like the conversation I get to have.

Guy: The podcast is every other week. A lot of people have asked us to do it every week, but with three people's schedules, we don't want the podcast to become an obligation or a chore. Doing it twice a month keeps it fun and interesting.

Gavin: Down the road, will you bring back more guests, or are you comfortable with things the way they are now as a trio?

Guy: I like the format we have. I would love to have some more guests on, but it is pretty set in stone as a music-based podcast, and there's few people who have the knowledge of old-school music like we do. And if they do, can they speak and keep up with three guys who speak professionally? There are some musicians in town who I would like to have on to share some stories from the road.

Marcus: I like things how they are. Unless we had a special guest, like a famous musician or someone like that, someone we all looked up to and wanted to hear their take on things, but even then, I think we'd maintain our format.

Gavin: Where do you want to take the show over the next year or so?

Guy: To the bank!

Marcus: It would be nice for it to still be a thing. Who knows. Everyone has a podcast, these things come and go, so if we are still able to talk like this in a year, killer. Assuming we still have anything to talk about at that point.

Allen: It will be interesting to see where the podcast goes. As with most creative projects, they seem to take on a life of their own, and I'm sure this one will be the same. It's such a fun process and we genuinely enjoy it, so I'm sure it will grow and develop and become something we never expected in the future.

Gavin: What can we expect from all of you and the podcast over the rest of the year?

Guy: Working on a special guest and I would like to do more live shows with audience interaction, hopefully, gain some advertisers. Hookers and blow, motherfucker.