By a margin smaller than in the primary election but nevertheless a fair distance ahead, Jackie Biskupski led Salt Lake City Mayor Ralph Becker in early general election results by 5 percentage points, putting Becker's bid for a third term at city hall in doubt.

The initial results of Salt Lake City's first vote-by-mail election had Biskupski leading Becker by 1,500 votes. She had captured 52.41 percent to Becker's 47.59 percent. Election turnout was expected to hover near 50 percent, a record for the city. The initial results included 44 percent of the total turnout.

If Biskupski holds on to win, she will become the city's first openly gay mayor, a barrier she broke down in state politics during her 13 years spent in the Utah Legislature. 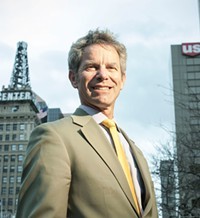 In the campaign, though, Biskupski's sexual orientation alone didn't always appear  to be enough to sway the city's gay voters. In the past eight years, it was Becker who chiseled a sterling gay-rights record, including his ability to pass a city-wide nondiscrimination law, which was the model for a similar law passed by the Legislature in 2015.

In the lead-up to the primary election, Becker appeared to lie back, letting his four challengers duke it out. The strategy no doubt saved some of his significant campaign treasure chest for the general election, but he was badly beaten by Biskupski, who claimed 15 percent more of the votes in the primary bout.

This deficit, and Biskupski's popularity among voters, left Becker with a long mountain to climb into Tuesday's main event.

The two candidates, who differ slightly on how to provide public transportation and stimulate affordable housing, spent a combined $1.4 million on the campaign. Becker dropped $863,000 to Biskupski's $536,000.

Salt Lake City Council District 2
Early results showed Andrew Johnston with 52.25 percent of the vote to Van Turner's 47.75 percent. Johnston and Turner were competing for the seat being vacated by Kyle LaMalfa, who declined to seek a second term in the west side district.

Salt Lake City Council District 4
For the past eight years, Luke Garrott, who finished a distant third in the primary mayoral election to Becker and Biskupski, has represented the city's downtown district. Early results showed Derek Kitchen with 51.1 percent of the vote to Nate Salazar's 48.9 percent.

Salt Lake City Council District 6
The one race in the city that seems firm in hand is District 6, which saw incumbent councilman Charlie Luke with 64.4 percent of the vote to Tracey Harty's 35.56 percent.