This holiday has been brought to you by the letter 'X'

Regarding the so-called Librul Media's so-called War on Christmas, this entry appears in every American newspaperman and newspaperwoman's bible, The AP Stylebook:

Christmas, Christmas Day Dec. 25. The federal legal holiday is observed on Friday if Dec. 25 falls on a Saturday, on Monday if it falls on a Sunday. Never abbreviate Christmas to Xmas or any other form.


Now, everybody knows the only reason people write "Xmas" is because they're trying to X-out Jesus from His special day. Or is it? The Greek letter chi ("Χ" in uppercase, Unicode #x03A7), which looks much like our Latin letter X, has long been a symbol of Jesus Christ because of its resemblance to the Cross. So attempting to "cross out" Jesus makes about as much sense as washing a bubble with soap. 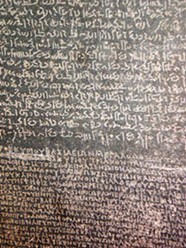 According to the O'Reilly War-on-Christmas folks, it happens all the time. Frankly, though, the last time anybody used "Xmas" was maybe during the '70s. And yet, there the proscription remains, right there in AP. It is simply never abbreviated to Xmas in a newspaper. Even a liberal newspaper.

BTW, the lowercase chi, Unicode #x03BE, i s a much more interesting, squiggly looking Greek letter. It's beautiful, in fact ... it looks like a spirochete or an alchemical symbol. I wouldn't mind running it in the paper ... rrrowr!

Overthinking It
Prev
Next