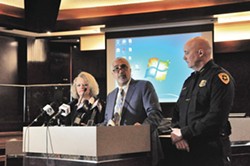 In a reaffirmation of his initial decision, Salt Lake County District Attorney Sim Gill on Tuesday said the fatal police shooting in January 2015 of a snow-shovel wielding man in the Avenues neighborhood was a justified use of lethal force.

Gill determined in February 2015 that Salt Lake City Police officer Matthew Taylor was justified in using deadly force during an altercation with James Barker, who had been going door-to-door offering to shovel driveways.

But four days ago, a previously unseen recording of the aftermath of the shooting showed what some believed was footage of Taylor kneeling above Barker and firing three shots. Gill, Salt Lake City Police Chief Mike Brown and Mayor Jackie Biskupski denounced this version of events, releasing their own video, which had not previously been seen by the public, which appears to clearly show Taylor’s weapon holstered as he handcuffs Barker.

“It is the conclusions of the Salt Lake County District Attorney’s Office that in light of this new video, there is no substantive change to our conclusion that we reached a year ago,” Gill said during a news conference. “The use of force was justified at that time based on the eyewitness testimony that we had from multiple eyewitnesses, as well as the materials that we gathered forensically.”

The new video, sent to media outlets on Friday by William J. “Dub” Lawrence, a former Davis County Sheriff and an advocate for police reform, was also viewed by Gill for the first time on Friday.

Over the weekend, Gill said the new video, which was recorded from a window of a home on 2nd Avenue near I Street, was carefully compared with video shot from street level. At the news conference, Gill played the videos side-by-side. “What this video will clearly demonstrate to you is that did not happen,” Gill said of any assertion that the officer executed Barker as he lied on the ground. “That officer Taylor’s gun remained in his holster and that when we look at it from this angle, that what is being suggested never transpired.”

That a video showing the immediate aftermath of the shooting remained unseen by Gill and prosecutors until Friday appeared to be the biggest crack in the investigation.

On the day of the shooting, Brown said that an investigator viewed the cell phone video and determined that it was not relevant. But Gill pointed out that it is not up to police officers to determine which bits of evidence are relevant at a crime scene—a contention Brown agreed with.

“I wish I could say that last Friday was the first time that our department had seen that video,” Brown said. “It wasn’t.”

He continued, saying that the person who made the video approached officers shortly after the shooting, the tape was reviewed and “a judgment was made at that time that we did not need to collect that tape because it showed a situation, the shooting, bad been passed.”

Brown called the decision to not gather the tape a “mistake.”

“Hindsight is 20/20,” Brown said. “We now know, and we’ve rectified that situation. As we conduct investigations into the future, every bit of information, everything is important and we will collect it.”

Gill said he had a very “frank” discussion with Brown on Friday about the importance to gather and turn over all evidence to prosecutors.

The Salt Lake City Police Department investigated the shooting, which in this case involved one of its own officers—a fact that Gill said could lead to the perception of a conflict of interest. Gill, a longtime advocate of ensuring that officers are prohibited from investigating lethal force incidents by their co-workers, said a state statute that passed in 2015 now requires outside agencies to investigate officer-involved shootings.

The video used by Gill, Brown and Biskupski to diffuse the video that materialized on Friday was not released to the public, Gill said, because is showed events after the shooting had occurred. While not deemed important a year ago, in light of the new video, which features two distinct pops as Barker is on the ground handcuffed, Gill said it is now very important.
“As this issue was brought up,” Gill said of the video released on Friday, the video obtained by investigators but not released publicly until Monday “now becomes extremely relevant.”

Former Salt Lake City Mayor Rocky Anderson, who is also an attorney and acted as an intermediary between Barker’s family members and police over the past few days, said that the emergence of two new videos previously unseen by the public is “rather bizarre.”

Regardless of the new information, Anderson said the focus should remain on the officer’s failure to de-escalate the situation. In video captured on the officer’s body camera, Taylor approaches Barker and asks him for his name and business license. Barker tells the officer that he’s just out looking for people who want snow removed. The officer responds that there isn’t any snow to be removed.

When the discussion appears to be neutralized, Barker tells the officer “Alright, I’ll just wait for it to snow again.” The officer, though, then asks again for the man’s name, and the dialogue gets heated, with Barker saying he doesn’t need to provide his name. Barker begins screaming, and at some point not captured on the film, strikes the officer with the snow shovel.

“Fundamentally what led to all of this was the failure of the police officer to de-escalate rather than escalating the situation,” Anderson said.

Brown said his officers have participated in two de-escalation training courses in the past 12 months, and that efforts are always afoot to improve policing.

Mayor Biskupski said the portrayals of Taylor on Friday after the cell phone video was disseminated “unnecessarily frayed our community.”

Biskupski said the investigation was not a “cover up,” nor was it conducted with a “predetermined outcome.”

Gill said that raising questions about police investigations and the government are appropriate, and he encouraged citizens to continue to keep a careful eye on his office and other public entities. But he said some caution in this instance could have prevented a distressful situation for Taylor, who still works for the police department.

“We have an ethical and a legal and moral obligation to do our due diligence and leave no stone unturned because loss of any life in our community is a tragedy and we are going to be held to a higher standard of that kind of accountability,” Gill said. “So in that sense, I welcome that, but at the same time I want to caution that as we make such inquiries, let’s be careful about the allegations that we do make because this officer deserved better and he has been exonerated in the use of that force.”

But Anderson pointed out that Barker, who apparently was just out looking for driveways to shovel, was shot three times at close range.

“I have a problem with that; I think most people should,” Anderson said. “Every time you get in a fight, you’re not entitled to shoot and kill the other person.”