When searching out new and interesting productions in non-traditional theatre-like settings, you get a nice array of the weird and unmentionable. Starting tomorrow night, Mod A-Go-Go will host My First Time, the Ken Davenport play that focuses on a collection of essays and letters depicting the first time people had sex. The evening is filled with stories from the sensational and bizarre to the awkward and painful, giving you a very raw look into the lives of people at one of their most intimate and personal moments. Today, we chat with our old friend Amy Allred, founder of A-Muses, the company putting on the production, about the shows they have up and what audiences are in for. (All pictures courtesy of A-Muses.) 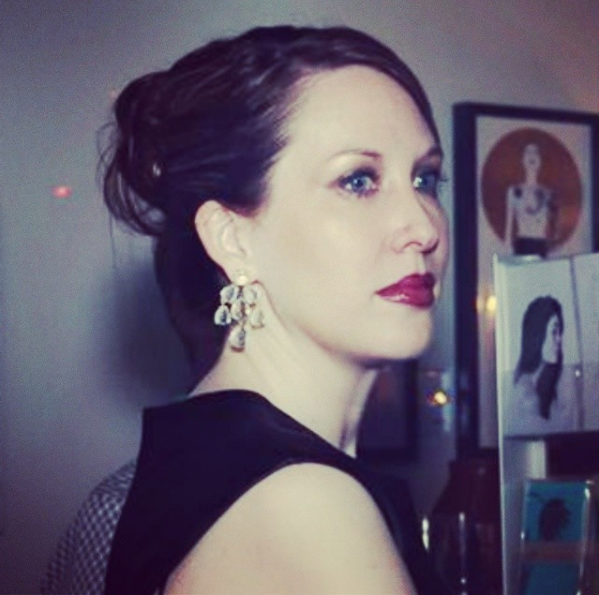 Gavin: Hey Amy, first off, how have you been since we last chatted?

Amy: I've been well, thanks. Still loving and supporting the arts scene as much as I can. I just finished my 22nd year of teaching piano, which is amazing because I'm only 29. I also finished another master's degree, which resulted in the opening of Mod A-Go-Go in 2013, and, yes, I am done with pursuing any more formal education, as I think my husband would murder me if I went for a Ph.D.

Gavin: What projects have you been working with over the past few years?

Amy: Over the past few years, I've been producing and directing a variety of audience interactive theater, from Shakespeare to My First Time. Last year I also assistant directed 5 Lesbians Eating a Quiche. I guess you could say, sex was the theme of 2015. I've also been playwriting, which I am doing under a pseudonym, or I would share more about that.

Gavin: When did you launch A-Muses and how has that been working out for the production company?

Amy: I launched A-Muses in 2009, and it's been quite a fun ride. I like producing non-traditional theater in avant-garde spaces when I have the opportunity. I also enjoy the opportunity to help and work with other arts organizations, performers, and artists. 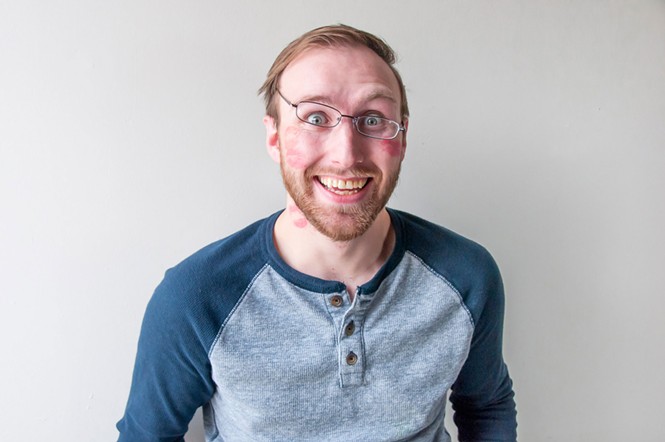 Gavin: How did you first learn about My First Time, both the website and the play?

Amy: A few years ago, I was on vacation in L.A. and made a stop at the Samuel French bookstore. It's basically Mecca for anyone who loves theater and reading scripts. I bought about 20 scripts, much to my husband's chagrin. One of those scripts was My First Time, and I read it the next day while lounging about at the hotel pool. After one read, I really wanted to produce it here in conservative Utah. Right after reading the script, I visited the website, which is the impetus for this play, and at that time, it still looked like it has been designed in 1998. Recently it has been updated, and you can still read stories and submit your own. And no, I have not submitted mine, but some of the cast members have.

Gavin: What made you decide to try and make that happen here in Utah?

Amy: We don't really have serious conversations about sex. We joke about sex, we look at porn, we shame others for having sexual feelings, we teach our youth abstinence-only sex ed, and we definitely don't talk about it as we should. With as much as sex is exploited everywhere, you never hear much about personal narratives regarding people's first times. Yet, our first time is such an impactful moment in our lives, regardless of the age it occurred. I was really drawn to the script and the humor, poignancy and heartfelt nature of it. When I read the story of the Mormon girl, I knew I needed to bring this to Utah. I don't want to give away any specifics on the story, but it's definitely something that people can relate to. 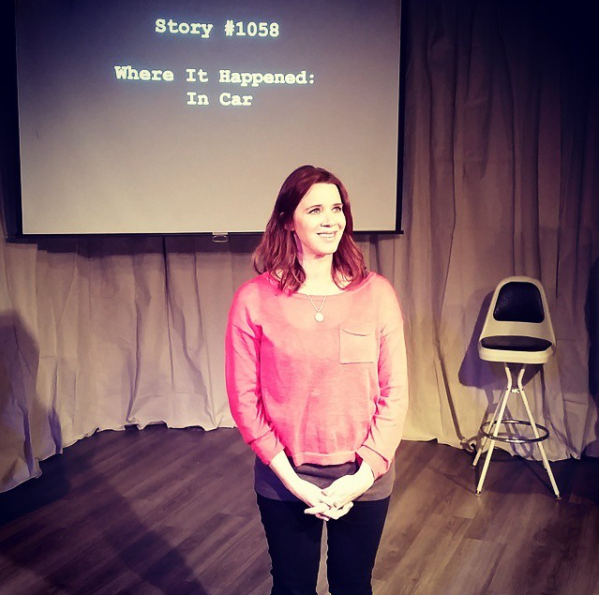 Gavin: What was it like finding people and working with a cast of players?

Amy: Our first round of auditions brought forth a lot of talent within the community. Because of the intimate nature of the script, it takes a true talent to really carry the vulnerability of these stories. This play really demands versatile actors and actresses who can play hundreds of characters, and I was lucky to find that with Alyssa Franks, Austin Stephenson, David Evanoff and Emilie Starr.

Gavin: Was there any difficulty adapting Ken Davenport's original play for what you needed?

Amy: This play is fairly minimal when it comes to a set and props. It does require the use of projections both before and throughout the show. Plus, at the beginning of each show, each audience member fills out a survey, and the answers are averaged out and incorporated into that night's show. Because I also the show each night, I've been able to leverage my Excel and PowerPoint skills to quickly and easily make the data-crunching of the audience's answers. Because the show is different each night based upon audience responses, it definitely requires both the adaptability of the show along with the actors/actresses to incorporate those responses.

Gavin: What made you choose Mod A-Go-Go for the setting?

Amy: Mod A-Go-Go was the evolution of an MBA project when I attended Westminster several years ago. Eric Morley, one of the owners of Mod, was in an entrepreneurship class with me, and we ended up on a team project together. We were tasked to create a business plan, and rather than doing a made-up business, Eric mentioned his serious intent to open a business like Mod A-Go-Go, and I was sold on it. I ended up naming the business and doing the branding integration. When I saw the space, specifically the upper gallery prior to the store opening, I knew I wanted to do theater there. I approached Eric and his partner, Marcus Gibby when I discovered this script, and they were very intrigued. After they both read the script, they were sold on the concept, and it was a very successful show.

Gavin: What were the first few performances like and what did you think of the crowd reaction?

Amy: Audiences loved the show. Naturally I was nervous because the show is all about sex, and sex seems to offend a majority of Utahns. The play really resonated with the crowds. I would hear audience members saying that it made them empathize with others while others would say it made them want to run home and have meaningful conversations about sex with their children. One audience member stated it best when they said, "It's a celebration of the human experience that connects us all." 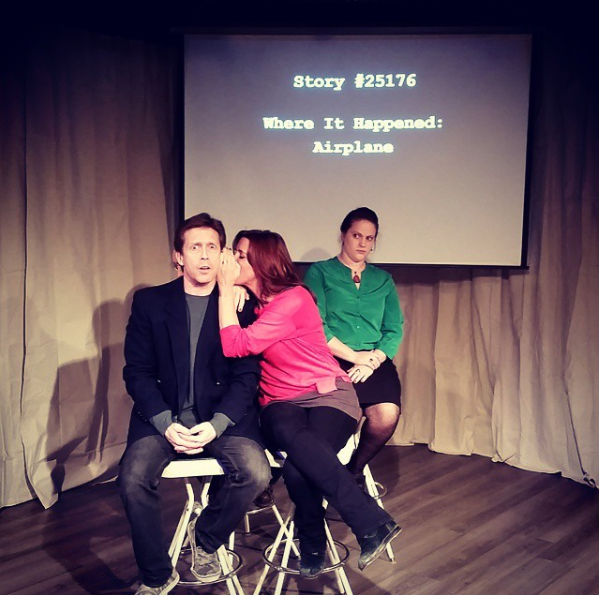 Gavin: You're bringing it back for an 8-day engagement. What made you decide on an extended run, and why keep it at Mod instead of taking on a local theater?

Amy: Last year it was so popular, we were selling out every night that we even added an additional performance. I knew after we closed the run last year that we do reprise this show at the same time this year. I intentionally picked Valentine's Day, because so many first times happen around this time of year. Plus, so many people dislike the holiday, and I thought this was a great alternative choice for those that loathe the holiday. Either way, the show makes for a fun date night or a night out with your friends where you don't have to hear about the romance of love, but people's true stories of their hysterical, awkward, poignant and sweet first time experiences. I didn't want to move it to a theater because I love the intimacy that we have by doing it at Mod A-Go-Go. The audience is so close to the cast, they are all on the same level, and there is no separation of a large stage and set. We would lose that closeness if I were to move it your traditional theater space. Plus, audiences love pursuing the art and furniture before the show and while they fill out their surveys.

Gavin: What can people expect to see these shows who have never gone before?

Amy: This isn't your traditional theater. It has a similar feel to The Vagina Monologues, but it has something for everyone and not just women. If I were an audience member, I would bring my favorite food and beverage, as we allow that, and be prepared for a great night of  while enjoying some amazing local art in an amazing space.  Also, if profanity and talking about sex makes you uncomfortable, this is probably not the show for you. My conservative family members refuse to see this show; yet, they are fascinated that I am doing that, and it becomes a regular topic of conversation. They told me if I would edit out all of the profanity, they would want to see it. Sorry mom, I just can't legally do that. 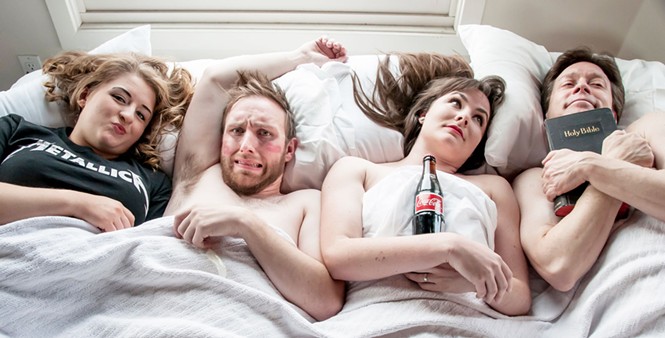 Amy: Right now I'm working with my band, JRANK, on releasing our debut album. We are also writing an opera selection in conjunction with Utah Opera and The Bee. Big stuff will be happening in April & May with all of that. I also plan on workshopping one of my plays toward the end of the year.