When you cook with high-quality ingredients, simple preparations are often the best. I think that's especially true of fish and seafood. When you start with sushi-grade fish, you don't want to smother it with heavy sauces and such. Less is more.

It doesn't get much simpler than this recipe for sesame-crusted tuna. Simply coat the tuna in sesame seeds, salt and pepper, and sear in a hot pan - that's it.

This recipe is for 2 servings, but you could easily double or triple the amounts.

2 sushi grade tuna steaks such as yellowfin, about 1-inch thick 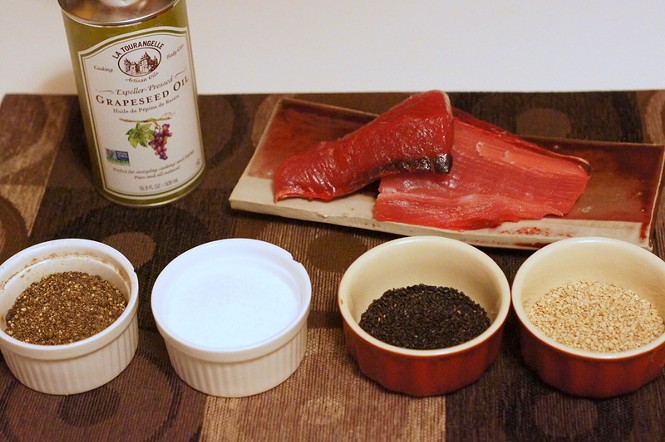 On a plate of shallow dish, season the the tuna pieces with salt and pepper and coat on all sides with the white and black sesame seeds.

Heat the oil in a skillet over high heat until screaming hot. You'll want to be sure to use a high-temperature oil like grapeseed or canola (not olive oil, for example).

Place the tuna into the skillet and cook for 30 seconds to 1 minute, depending on how done you want it. 30 seconds will result in tuna that's still raw in the middle (like sushi). Flip the tuna over and cook for another 30 seconds to one minute. The tuna here cooked so fast I forgot to take photos of it cooking!

Transfer the tuna to a cutting board and cut into thin slices.