Sanders to Speak at West High 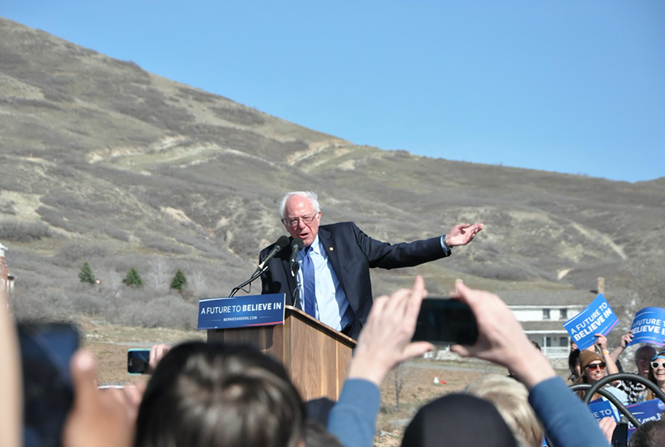 The whirlwind of presidential activity that swept through Utah on Friday, March 18, isn’t quite through: Vermont Senator Bernie Sanders, who drew a crowd of 14,000 to This Is the Place Heritage Park last week, will speak today at West High School.

Sanders’ appearances come in the lead-up to Utah’s presidential caucuses on Tuesday, where Sanders and his opponent, Hillary Clinton, will compete for 37 delegates. Republicans, including Donald Trump and Ohio Gov. John Kasich, who both visited Utah on March 18, will be vying for 40 delegates.

It has been two decades since Utahns picked their presidential matches in caucus-style meetings. The state typically uses a primary election. But in 2015, due to controversy surrounding Senate Bill 54, which thwarted a ballot initiative that would have permitted open primaries in the Beehive State—the Legislature declined to budget the $3 million needed to fund an election.

During Sanders’ visit on Friday, the white-haired man preached his populist message to an enthusiastic audience that was so large, many had to be turned away. Sanders railed against America’s election system, in which the nation’s wealthy dangle tens of millions of dollars before the candidates of their choice. The average size of a Sanders campaign donation is $27.