It's no secret that Utah is a hub for game development. Disney has been here for ages; EA Games has an office on State Street; Chair Entertainment resides in downtown Provo. But beyond the big names that claim Utah as their home are dozens of independent developers. One of the rising names is React! Games, which will be seeing a big release for their upcoming 2016 game, Super Dungeon Bros.

Founded in 2008 and calling Taylorsville their home, React! was the brainchild of founder Chad Lee. Originally starting as an artist, Lee got into the gaming industry in 1994 building concept art for characters and backgrounds. As gaming transitioned into 3D with the Playstation and N64, Lee trained himself in 3D design to become one of the best modelers around for different companies over the course of 15 years.

After years of working for others, Lee formed React! In 2008 and kept the company in Utah. “The career path for any animator is to work at Pixar or Disney,” said Lee. “But I stayed in Utah to primarily stay close to my daughter from my first marriage. Because of this, at first, my options were limited, but it forced me to create my own career here, instead of going to California.”

While forming the company, Lee partnered with BYU, U of U and Neumont University to hire interns and staffers over the years to work on new games. They've also worked with Wahoo/Ninja Bee, EA and WildWorks to help support their efforts. A rarity in the business, the local disconnect has allowed companies to share ideas and help where they can. In the past eight years React! has helped develop games for DreamWorks, Disney, Hasbro, Microsoft, Intel, Sega, EA, Ubisoft and even Steve Wozniak. Their first game off the break was a remake of the classic title ARCHON for the iPhone and PC.

Currently, the company is working with Wired Productions, which is publishing Super Dungeon Bros. The game features four British-type knights in colored armor wrecking their way through medieval levels of multiple enemies and challenging puzzles. The game feels like the Ninja Turtles sported some armor and decided to crash their way through the hardest levels of Gauntlet you've ever seen. Players have the option of bravely venturing in alone or teaming up online and at home through 4-player co-op. 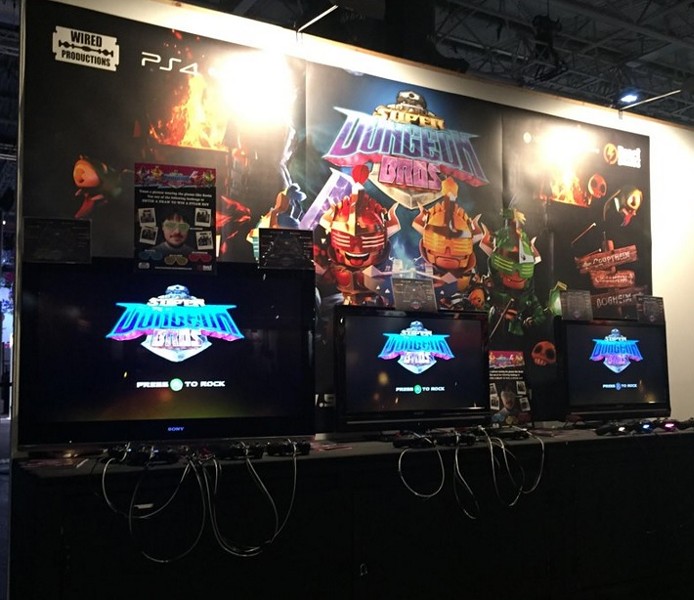 The game was an unexpected hit at E3 in Los Angeles, PAX in Seattle and EXG in London, and if the reviews are any indication, the game is pretty much set to become one of the biggest multiplayer games of the year. When it will be released is another question, as the target date has been pushed a couple times. But React! and its team are taking it in stride.

“This project has been a love/hate relationship. Some days we think it’s the most awesome thing ever, then literally, the next day it’s crap,” said Lee. “Anyone in game development will understand that. It’s been a long, hard road. It’s been the longest development we’ve ever done on a single project and now that we’re close to the finish line, we’re excited, relieved, worried, frustrated and happy.”

Keep your eyes peeled as we head into gaming convention season for new playable demos and reviews before it's released onto every format this year.