The mystery and meaning of Salt Lake City's public art.

April 07, 2016
comment
Once you start looking for public art, it pops up in all sorts of places. There's the series of pieces that decorate Trax stops, for example. Or the parallel statues of a mother and a father each with a child on 200 South. That's called "Counterpoint" by Dennis Smith, a corporate-funded installation done in 1979 that is an evocative celebration of the pleasures and responsibilities of parenthood. Yet, somehow in Salt Lake City 2016, "Counterpoint" seems out of place.

Art, of course, is subjective. Which is why it arouses so much passionate debate among those who make it and those who study, collect or pay for it. Yet Salt Lake City's public- inventory, some local artists say, too often merges with the urban landscape to the point of invisibility.

William did his first public-art piece 30 years ago, an abstract image of Our Lady of Guadalupe, which still stands today and which he views as a success. But, in general, he says, “We make things that will be less unfortunately. Sadly, often times, public art is very pedestrian. It's publicly popular art as well.”

Another longtime local artist with public art on his resume, Frank McEntire, also bemoans the self-effacing nature of much public art. “A lot of the material going into public places, it’s safe, it doesn’t capture the spirit or history of Utah or even point toward the future of the community it’s trying to serve.” 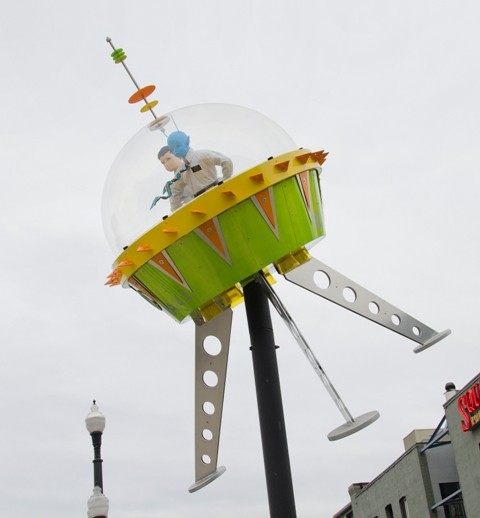 Salt Lake City-based artist Amy Caron's portfolio features large-scale science-art installations, including one for The Leonardo. “My general impression of public art here is that it tries so hard to please that it accomplishes nothing or—perhaps the worst of all—it renders as utterly forgettable.  This poses some interesting questions about the role of public art. What is it supposed to accomplish? Can it be emotional or humorous or dark?”

The Salt Lake City Arts Council's website of its public art reveals a wide selection of sculpture. Cordell Taylor is a longtime local sculptor and artist with an international reputation. He says sculpture “is important because it relates to you in your world, you can walk around it, and from every angle you’re able to see it from a different view. It broadens your horizons.” Sculpture’s popularity in the public-art realm, he says, is because it is placed where you can sit and ponder its questions. “If you’re willing to let the question be asked and interact with it, then you can have a great experience, but if you are unwilling and immediately block it out, it becomes almost like a ghost and will haunt you,” he says.

Local artist Jeffrey Berke, one of five finalists in a downtown-arts commission discussed in this week's cover story, expresses frustration regarding the dominance of sculpture among Salt Lake City’s public art. “I don't understand why the city's public-art spending is devoted exclusively to fixed sculpture and craft. What about street theater, soundscapes, digital media, performance installations, microfestivals, pop-up exhibits, even live/online interactions? The city has no process or expertise for this. The result is that most artists and art forms are excluded," he says.

The Arts Council’s head of public art, Roni Thomas, says that lack of alternatives to sculpture is not from a lack of will, but a lack of funding. “We’re seeing more of that, street art opportunities, guerrilla art. We’d love to have opportunities to participate in that, but it’s a matter of budget. We’d love to have more grassroots community-based projects; it’s the facilitation of those that becomes a stumbling block,” she says.

Despite the glut of sculpture in the city's public-arts collections, things have changed in recent times in the Beehive State, says the Utah Arts Council's executive director Jim Glenn. “Early on, it was more painting and sculpture” that dominated public art in Utah, he says. More recently, however, “the field has evolved to involve almost any media—digital media, glass, textile, stone. Really, what we’re going into is truly integrated public art rather than 'plop' art—which is a criticism early planners had about public art, that you’d create work and 'plop' it into a plaza.”

While Salt Lake City has pursued a public- program for decades, the past three years have seen significant spending by the arts council, according to a record request made by City Weekly to look at recent art commissions by the Salt Lake City Arts Council. You can review the list in its entirety here.

While the council has spent $4.5 million on public-art pieces since it opened its doors in 1985, $2.9 million of that sum was spent just in the last three years. This is reflective of two changes, Thomas says. One was the formation of a public director position eight years ago, for which Thomas was hired. The second was a number of high-profile buildings going up in the past few years. Examples include the Public Safety Building, which enjoys four public-art pieces with a total commission value of $865,000 and the new downtown Eccles Theater, which boasts two art pieces totaling $529,466 in commission value.

Perhaps no other public art in Salt Lake City generates as much feeling and disagreement as the "Flying Objects" series, funded by the city's Redevelopment Agency.

The series' are one of Salt Lake City Art Council’s executive director Karen Krieger’s favorites in the collection. “They are colorful and very visible,” she says about the art work on poles that every few months is moved around the city, and pieces are installed typically in front of art houses, like the Capitol Theatre or the Rose Wagner. The artists who make them are local, “and may not have had a chance to work in the public-art realm before,” Krieger says. “It’s a fabulous way to serve our mission to give them opportunities along their career.” When the series started, each commissioned artist earned $5,000. This year, for the first time, the flying objects will be permanent and the commissions, which went to 12 local artists, were $12,000 each.

Local artist Derek Dyer admires the "Flying Objects" series. “It’s great idea, whimsical, inexpensive," he says. "We definitely need things like that in the city. I love the fact it's open to interpretation beyond the flying themes. It’s one of my favorite public-art endeavors.”

Others aren’t so impressed. Standing outside Squatters on 300 South in downtown Salt Lake City, Jeffrey Berke gazes at what he calls “”—in this a spherical spaceship with a human and an alien Mormon missionary titled "Zion/Rocky Mountain Alliance" by Brook Robertson—and muses, “Why put art on posts? Why make it literally inaccessible? Are you thinking of it as a utility?”

Thomas says they were put up in the air “because there’s so much activity on the streets.” She also cites public safety, and a wish “to elevate your eye to something else that can be more fun.”

Some artists and city officials argue that public art is more than simply what the city or corporations are willing to pay for. It's about remaining fresh and relevant years after installation. A number highlighted the 2009 mural of the Virgin Mary, “Ave Maria,” spray-painted on an east facing wall on 200 South by artists El Mac and Retna. It brings energy and color to an otherwise drab part of downtown, its admirers say.

Relevancy isn't the only issue. There's also a desire for something people can interact with. Scott Beck, chief executive of Visit Salt Lake, cites a 10-foot tall structure of the words “I Amsterdam,” in the Netherlands capital as one example of public art that both helps define the city and draw tourism. One of the few comparable pieces he can recall in Salt Lake was the field of 7-foot-tall poles called "Swayed," erected next door to the Capitol Theatre on 200 South as one of the few memorable and successful interactive public-art pieces. “You could interact with it, walk through it, bend them together," Beck says. "Whether social media posts from conventions, wedding photos or college students downtown, that was an experience people remembered.”