Farewell to Siegfried, the Bratwurst King

When I think of Siegfried Meyer, two things come to mind. How my youngest daughter, Katy and I would always fight over his liverwurst, and what a great appetite for life he had.

My wife and I told our children Wednesday night that the 69-year-old gourmand, chef and lover of motorbikes and womankind,  had been in a terrible motorbike accident and we didn't know when, or if he would wake from his coma.

As was his custom, he was not wearing a helmet and when, according to a Salt Lake Tribune story, a 21-year-old driver who had marijuana and paraphernalia in his car, cut in front of him in South Salt Lake. Meyer suffered severe head injuries. The youth apparently tried to hide the dope and pipe.

The next morning, we learned that despite surgeons relieving the pressure on his swollen brain, he hadn't made it. My girls looked sad but went to school. Shortly after Katy called from school crying. I walked down to the corner to meet her and she fell sobbing into my arms. "It's not fair," she said.

It was hard to disagree.

As we walked up the hill, my arm around her shoulders, we talked about what how wonderful his food was. The glorious bratwursts he was always so generous with, and which were the foundations of his spectacular Solstice and Oktoberfest celebrations at his rickety, sprawling house in Lamb's Canyon, through which a stream runs and a tree rises up through the structure.

I told her how to me he was like this Germanic bear who gave these all-consuming hugs and always had a smile on his face. It was a marvel where he found the energy to cook for hundreds or even thousands , catering for Snowbirds' Oktoberfest and events across the Wasatch Front. He slept so few hours, forever on the run from one catering event to another, from one gathering of friends to another.

There was this ferocious appetite for life within him that I guess made caution a word he never knew. Whether a helmet would have saved his life or not, I don't know. "Why didn't he wear a  helmet?" Katy asked through her tears. "It was so stupid." And again I found it hard to disagree. 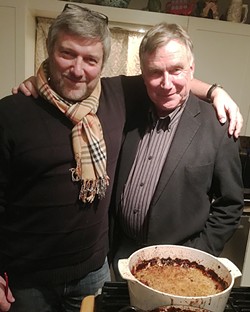 the deli Siegfried founded (Siegfried's on 200 South and 20 West) a little too crowded at times to eat comfortably, I would routinely swing by after the lunch rush to enjoy a liverwurst sandwich.

As Katy and I got home, we laughed about how for her birthdays Siegfried would present her with a long piece of creamy, delicious liverwurst which she would then hide from me at the back of the fridge. In her laughter, as much as through her tears, I saw how deeply ingrained he was in our family.

As much as Siegfried was a consummate showman in his presentation of his food, at his heart I learned over the years, was this simple, undemanding and yet overwhelmingly generous desire to love his multitude of friends by sharing his life, his food and his home with us. He always gave, and never expected anything in return.

Utah lost a son this week who can never be replaced, but whose memory and that warm, open smile, will, unlike the Cheshire Cat, linger in the air like a blessing whenever those who love him gather to dine.