As we're getting closer to Pride Month, and the political season gets worse by the minute, we're starting to see a lot more local activism coming from the LGBTQ+ community, as well as those centering around women's rights and equality. It's awesome to see those individuals stand up and be heard, as those topics generally get swept under the rug quickly by the legislature and other local governing bodies. This month, we look at a zine attempting to help influence the conversation: Pillars Of Salt, produced out of Provo, with a release show happening tonight (May 6) at Muse Music. Today we chat with the founder of the new zine, Sara Faulkner, about the content and mission of the new publication.  (All photos provided courtesy of Pillars Of Salt.)

Hey, Sara! First thing, tell us a little bit about yourself.

Sara: I’m from Seattle, Wash., but have been living in Utah for the past four years. I’m married with two daughters and study community health at UVU. In my spare time, I love to cook, draw and write.

As you were growing up, did you have any interest in zines? Or was it something you discovered later on as an adult?

In high school, I thought I was pretty hardcore! I loved punk; the music, the people, and the fashion all drew me in, but the unique voice that punk rock gave social and political issues are what attracted me most. My first interaction with a zine was through my cousin Eddie, who lived with my family on and off throughout my childhood. He had a great music collection and a small collection of paperback books and zines. One that stood out to me was a fanzine called PUNK, created by cartoonist John Holmstrom. The artwork and comedic elements throughout were great, but the inclusion of female artists, like Debbie Harry, throughout the zine is what resonated with me most. Soon after this I discovered the giant world of fanzines being created by many different people from diverse backgrounds. Inspired, I tried to create a few zines on my own, but the loss of my cousin, Melea, made me lose interest in art. It wasn’t until 12 years later, after moving to Provo, I felt the need to introduce zines back into my life. 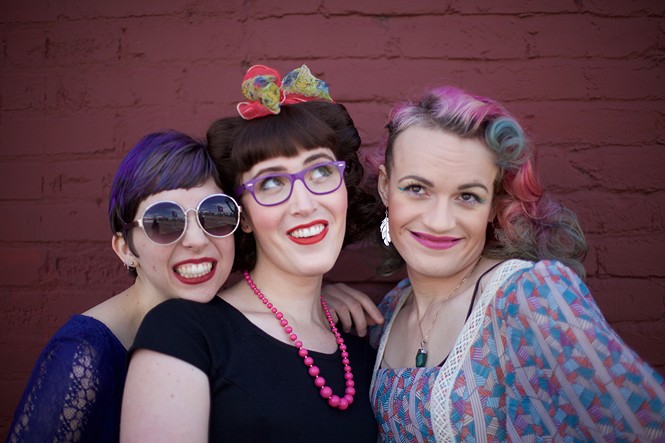 As you grew into adulthood, what was the catalyst that got you interested in social causes?

One word: suicide. I have lost family and friends to suicide. Most of whom were from Utah. My first experience with suicide was through the death of my cousin and closest friend, . Since then, over the past 11 years, I have struggled to understand the many reasons that people choose suicide. Most of them, I feel, have stemmed from patriarchal abuse. Whether it is through sexual assault, control of sexuality, or control of gender, these “norms” stunt progress and hinder love. I never want my children to experience exclusion based on their sexuality, gender or being a victim of sexual assault, and I want them to grow up around people who truly love and accept other people.

What did you participate in over the years and take the most pride in being a part of?

The thing that brings me most pride, though a cliché, is being a mother. I have lived a crazy, whirlwind life, and being a parent has grounded me and introduced me to the importance of accepting vulnerability as a means of strengthening myself.

People may not know you're married to Joshua Faulkner of Conquer Monster. When did you meet and eventually get married?

Joshua and I had the same friends, but didn’t interact much. He was friends with my cousin before she passed away, but we didn’t really have a substantial conversation until 2012. Our first date was at a Neon Indian show in SLC. It's embarrassing to say, but we actually got married nine months after we started dating.

How is it for you living in Provo and raising awareness for various topics in a city that really isn't recognized for outreach?

I've lived in Provo for three years. The first two years were the hardest. The stark contrast between diverse, liberal Seattle and uniform, conservative Provo is shocking, to say the least. Joshua and I have struggled with living here, but we have met some amazing people. There are two outspoken sides in Utah: The extremely conservative LDS side, and the anti-LDS side. I've struggled with these polarities, and have felt that both sides can be very counterproductive. The discussion of “this lifestyle is bad” or “this is a better way to live” is futile. We all should be supportive of everyone and anyone, as long as they are not hurting others. If you want to understand my experience, in a nutshell, watch the film Troop Beverly Hills. At times I feel like Phyllis Nefler trying to sing "Kumbaya" in the mud, feeling out of her league, vulnerable, and then discovering the reality of the world and the importance of empathy!

When did the idea come about to create your own zine?

I was working on a personal zine two years ago. As I was writing one night, I felt an urge to reach out to people and include them in the process. I discussed it with a few friends and found that I wasn't alone in wanting to create a zine that would be an inclusive resource for LGBTQIA+ individuals, women and allies.

As mentioned, the primary focus of the topics comes from women, LGBTQIA and non-binary people. What was the motivation to make the zine focused on those groups?

Suicide. Suicide is very prominent in these communities. There’s a lot of talk about suicide in Utah, but I rarely hear anyone talking about the root of the problem: apathy and hate. There’s a lot of apathy and hate aimed towards LGBTQIA+ individuals and women, which stems from the fear generated by LDS standards and misogyny. We want to shed light on particular practices that contribute to the high suicide rates in Utah. Systems that we all participate in were built by and for white heterosexual cis males, and some groups in Utah push these systems to the extreme, which translates into people feeling worthless. Remember that just because you haven't been affected by the prejudices built within these systems personally, doesn't mean that these prejudices don’t exist.

What was it like reaching out to people and asking for submissions?

Initially, I was fearful. Being an intersectional feminist in Utah, I was worried that most people wouldn’t care about the topics in the zine. Utah has a long way to go, but Utah is progressing, and that’s inspiring. There are so many musicians, artists, activists and everyday people who are working to change the world! Curating Pillars Of Salt has helped me to realize that I am not alone and that there are people out there willing to do the work needed to educate, inspire and prevent exclusion, ignorance and death.

What was the process like for you in sorting through everything and planning out the first zine?

Stressful, fun and liberating. I am not a professional writer or editor, so this process has been humbling. We don’t restrict the content in Pillars Of Salt, because we want to give the contributors creative freedom. Each contributor’s voice, message and personal experiences are valid and unique, and we don’t want to get in the way of that. We want readers to be aware of people in their community that are supportive, accepting, and understanding of the prejudices that women and LGBTQIA+ individuals face daily. 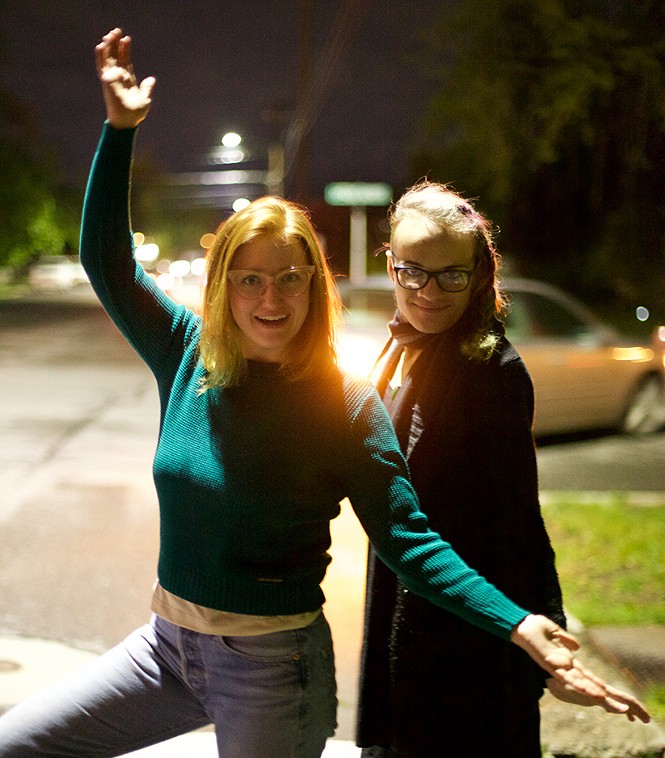 What are some of the pieces you're most thrilled to have as part of the collection?

Honestly, I’m impressed with all of the art, poetry and writing throughout the first issue. However, the piece that I am most excited about is the Hande Togrul interview written by Natascha Deininger, which offers discussions on feminism and anti-racism. I’d love to go into more detail about this piece, but I don’t want to ruin the surprise. You’ll have to read the zine to find out more!

You have a release party coming up on May 6 at Muse Music. Tell us what people can expect from the show.

The show will be a celebration of the completion of the first issue. Local bands New Shack, Batty Blue, Alyssa Pyper and will be performing. We love the music that these individuals make and each band includes members who identify as women, LGBTQIA+ and/or non-binary. The show is only $7, which includes a copy of the zine. The zine consists of work submitted by nine local (SLC-Provo) individuals with submissions ranging from art, prose, poetry, personal essays and games. Pillars Of Salt isn’t meant to only be a zine, it is also meant to be a community, so events like the release show are important for developing that community. Everyone involved with Pillars Of Salt works to create a sense of community, support, and love. If you, your friends, or your family struggle with feelings of exclusion in Utah, we want you to be a part of our community. Pillars Of Salt is not about any single person. It is about connecting.

For those wishing to become involved, how can they reach you?

Sending us an email at pillarsofsaltzine@gmail.com or Facebook message are the fastest ways to get a hold of us, but you can also check out our website, Instagram, or Tumblr page for more information.

What can we expect from you and Pillars Of Salt over the rest of 2016?

Our goal is to release 2-3 issues per year. We hope to have a release party for each issue, whether it is big or small. Although we talk about serious issues, we want to have fun doing so! We want to create a dialogue that will inspire others to go out and educate themselves while respecting and learning to empathize with women and LGBTQIA individuals. We want to help others to think before they speak or act out in apathetic or ignorant ways on social media. Ultimately, we want to prevent the suicides of amazing people, who need to be recognized as beautiful, smart, talented and vibrant pillars of society!