The Pipeline: Hacking The World To Freedom In Dex | Buzz Blog

The Pipeline: Hacking The World To Freedom In Dex

The cyberpunk RPG finally makes its way to home console.

July 19, 2016
comment
The Czech Republic-based Dreadlocks Ltd (teaming with developer Badland Indie) managed to do what few gaming companies have been able to pull off: launch a successful video game on Kickstarter. Where many failed before and after them, Dex succeeded, and has that top honor as proof that great things can be accomplished with crowdfunding. The game originally made its way to Steam where PC players got their first taste in August 2014, later fully released in May 2015. Its taken over a year for the game to see a console release (on Xbox One July 8 and PS4 on July 12). The big question for gamers is whether the console versions truly hold up to the PC version, which has been largely praised though it comes with its own set of criticisms.

First and foremost, the story is solid. Dex is the name of your character, a woman on the run from assassins after she's saved by a hacker named Raycast. After plunging into the sewers and fighting your way back to the topside, you outrun those trying to capture you until it's revealed you're a much bigger part of the grand scheme of things than you think. Without getting too far into spoiler territory, you soon learn to become a master hacker and fighter, attempting to bring down The Complex that currently has a stranglehold on your hometown of Harbor Prime. Pieces of this game remind me of The Matrix mixed with Logan's Run and Fahrenheit 451 . It is very much a "you vs. the status quo" type of story, and let's be honest here, you're going to root for yourself. 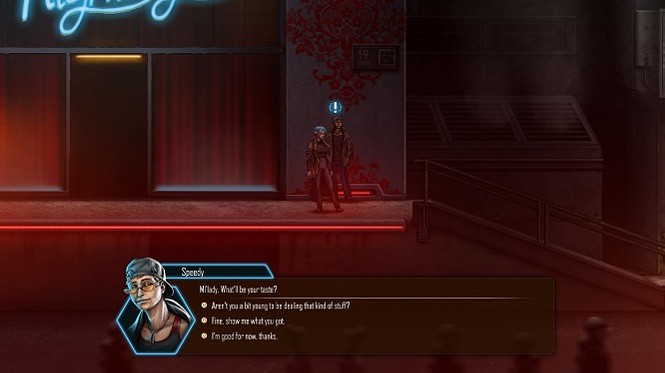 The gameplay is for various reasons. To begin with, you're playing a side-scrolling action RPG, which in itself is a rarity, as we don't get many of those. For those not familiar with the genre, the Castlevania series is the most commonly known as a comparison to the physical gameplay, as you grow your skills and have ways to expand your abilities through knowledge, weapons, armor, etc. Storyline-wise, it's a choose-your-own-adventure kind of scenario. The decisions you make in conversations, tasks, quests and other interactive elements dictate the story, as well as the experience you gather to improve your character. From the lowest bottom-feeding 'hood leader to your most trusted allies, casual chats have great impact on the world around you. And that's a very intriguing part, because there are things you could do to earn a lot of experience or completely fail and get little from. In essence, the game only gives you options, but it doesn't necessarily give you everything you need in good time to get what you want, and forces you to make the call. 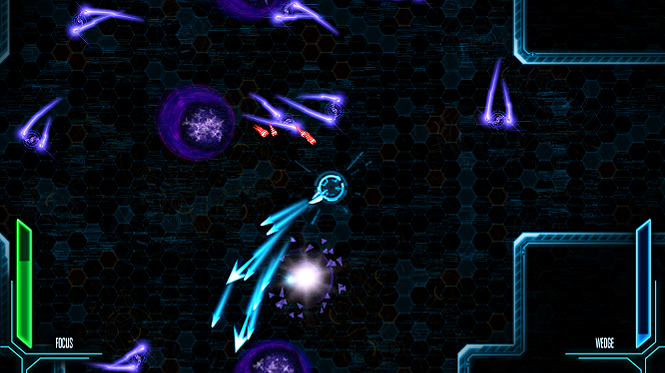 The hacking element itself is pretty fun when it's the simple stuff you're doing on the side-scrolling portions, as you're able to mess with your enemies. But the game starts to get a little funky when you're doing intensive hacking. When you link yourself up to a bigger system, the game reverts to a top-down arcade shooter, where you're forced to fight off floating enemies and take out firewalls to get what you need. Things do get more complex as you go on, but it's 50% interesting and 50% confusing as to why the game would shift tactics and present an entirely new genre to do something that should feel more high-tech. Yes, it is a game, but think about it logically for a moment. Unless your encryption system was designed by Dr. Wiley, who would ever think to build a system like this? It makes for an interesting addition, but the gamer in me also knows this is quite ridiculous. 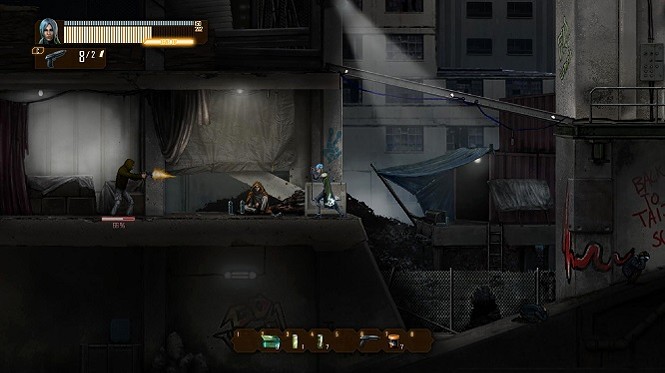 By far, the most annoying aspect of gameplay is hand-to-hand combat. If you have a gun with full ammo, congratulations, the game is officially 75 percent easier. But when you're going toe-to-toe in a game of fisticuffs, forget it! You might as well get used to dying frequently, because you'll be doing a lot of it. The fighter intelligence is randomized, so there's no way to really predict the patterns of the fighter's style. A good example of this is when you encounter someone with a whip. They have three attacks: Whip back-and-forth twice, whip once and block, or spin the whip in a circle around them. Your standard fighting approach would be to look for a pattern in that chain and hit when you figure out the openings, but the system is set so that there is no predictable pattern, and a lot of your punches are guesswork. Half that time, you're going to be taking damage for throwing a punch when you shouldn't have. Being clever with your punches and dodging isn't a guarantee for success either, which makes me believe this part of the game didn't translate well to major systems.

In the end, Dex is a bit of a conundrum for console gamers. On the one hand, you have this really awesome story that hooks you in and makes you want to play for hours just to see where it leads you. On the other hand, you have a system marred by minor inconveniences that could potentially become frustrations leading people to turn off the game. I highly recommend it for people into sci-fi, cyberpunk, hacking culture, future drama and other genres of that ilk. If you're into action RPGs, this one is a challenge on many levels, but well worth the experience. However, if you're easily pissed-off by glitches and bad enemy behavior that doesn't let you sail through the game in under an hour ... stay away. All Dex will do for those players is add another 50 points to your blood pressure that you don't need.