A look behind the camera with the downtown SLC production company.

The SLC filming market has a ton of talented people involved, but a good portion of them aren't making films or television shows on a daily basis. They're finding work in other corners of the market—such as viral videos and commercials—and are making a name for themselves with a body of work that few think about when it comes to their portfolio. One of the bigger independent companies in Utah making waves in this area is The Brute Squad, a team of dedicated individuals who work magic behind the camera to make their clients and personal projects look awesome. Today we chat with Greg Johnson, one of the co-founders behind the group, to talk about their formation and the work they're producing. (All photos courtesy of The Brute Squad.)

Gavin: Hey Greg, first thing, tell us a little bit about yourselves.

Greg: Well we’re a small production company hiding out in a basement/bunker in downtown SLC. We’re currently mostly working on commercial and industrial videos for national and global clients, but we also dabble in short and feature film work and visual effects. When we’re not working you find us grilling up something amazing while either enjoying a fine IPA, stout or a whiskey.

What got each of you interested in film and TV production early on?

Denver [Robbins] got an early start working with father in the industry as a makeup artist, then worked his way into becoming an amazing producer. For me, I think my interested stemmed from a fear of working a “normal” job. When I was younger I didn’t know what a “creative” was, but I had a tremendous fear of working in a cubicle doing mundane tasks. Originally, I thought I wanted to be a musician or audio engineer, all the while making videos with my friends. Turns out I was a hack musician and audio engineer, but came quite naturally, so I eventually embraced it.

Education wise, what are all of your backgrounds in filming?

We’re both self-taught. Film school is great for some, but it wasn’t for me. I learn out of necessity and from doing. Also, it was tremendously expensive, so I opted to buy gear rather than pay tuition.

When did you each meet and/or work with everyone and eventually become friends?

Denver hired me for a gig over ten years ago. He heard I had a steadicam and thought it’d be great for a corporate piece he was working on. I showed up to the shoot, talked him out of using the steadicam and instead I operated the camera. He liked what I did, and decided right there that he didn’t need to touch a camera again, and would focus on producing. (Or so the story goes.)

When did the idea to start up a production company come about?

It's a bit of a cliché tale in the creative space—young creative leaves the safety of the big evil agency and starts his own hip agency”—but that’s pretty much what happened. I was working for another agency and I loved my job, but as time wore on I became frustrated and fantasized about having my own company and doing things my way, with my friends. Eventually, the agency and I parted ways. On the drive home from my last day at the agency (in full blown panic mode mind-you) I received a call from a friend asking me to take two weeks off of work so that I could work on a large video for a friend of this friend. It turned out to be a very large production, and I thankfully I had my LLC and everything all ready to go. So I was out of work for about a total of 15 minutes. This gig was pretty much a springboard to getting us up and running—living the dream! I’m stupid lucky/fortunate. 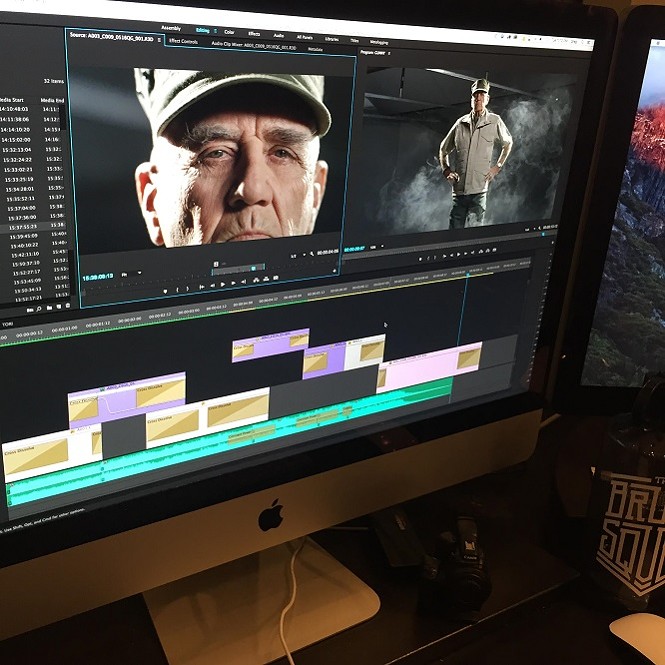 What was it like pooling your resources together for the company? Where did the name come from?

I wanted a name that was pseudo-military but fun and approachable. I definitely didn’t want a firm with last names, that’s so dated. So I was thinking about the words: team, group and squad. Then “the brute squad” from The Princess Bride popped in my head. I checked the URL, it was available (which is amazing luck) so I bought it, then registered the LLC. As for resources, we literally started with nothing. I had a computer and that was it. With deposit for our first gig, I went to IKEA bought desks and got a small humble office space. We rented any film gear we needed for the first year. Fast forward four years, we have amassed quite the arsenal of gear: cameras, lenses, monitors, grip van, etc. etc.

How did you come across your studio in downtown SLC and decide to make it your home?

Our first space was the cheapest I could find—since we were a startup. It was at the ArtSpace Commons on 800 South and 400 West. It was the perfect incubator. Eight months later, we took a huge leap and got a proper ground-level creative space on Pierpont on a one-year lease. When that was up, the landlord wanted to double our rent, so we totally peace’d out. We searched all over the valley, looking at just awful water-stained, drop-ceiling-tiled, fluorescent-soul-sucking office space that was about $20-25/sqft. At my wit’s end, I vented to a real-estate agent showing us one of these hell-holes. I exclaimed that I wanted an industrial-like space, just one big room, with some side rooms, downtown, [something] that we could make hip. He said, “Oh I got a place just like that on Pierpont for $9/sqft.” I didn’t believe him, but he did. Turns out it was next door, and we’d never noticed the space, as it's kind of hidden. So yeah, after scouring the valley we ended up moving about 100 feet. We’ve been here for over two years, and we’ll be here for a few more. We love being downtown, it’s accessible for our clients, it’s hip, lots of great food, pubs, and stuff going on. We love it. 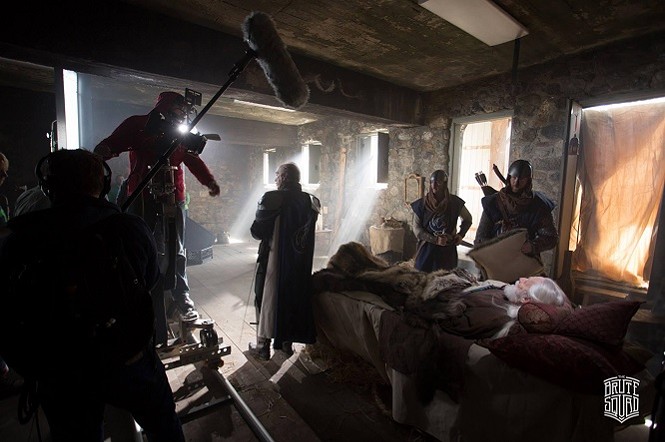 What was the first year like to get up and running?

Sheer exhilaration and utterly terrifying. I’ve never owned a business before. It’s a total rollercoaster, the highest ups mixed with sleepless nights—either from stress or pulling all-nighters. But, I didn't have to answer to anyone, and I wasn’t making someone else rich, so I loved it. I was living the American dream, right? There were a lot of people and potential clients saying “this will be good for you” and “do this first one for free, get your name out there” crap. And some scammers trying to best me but held my ground and it all worked out.

Who were some of your first big clients to work with and how was it working with them?

Oh, our first big gigs were mostly white-labeled, but they were great. Cafe Rio actually hired us before we were even a proper company. We were just a rag-tag bunch of dudes who hit them up with a cold call. We created those fake movie trailers that played in the Megaplex, like, six years ago. It was awesome to see our cinematic work on the big screen. We actually delivered the ads to the theaters in the same format as Hollywood trailers, so they played after all the cheesy local ads. The lights dimmed, the screen curtains calibrated for cinema-scope and bam, our ad played. I loved it. Cafe Rio also took some screen shots and made fake movie cardboard displays that were in theaters. It was hilarious. Cafe Rio is such a great company, great food and fun brand. I’m still shocked they let us take their multi-million dollar brand and do a bunch of stupid skits in the desert. It was really ambitious and trusting on their part. 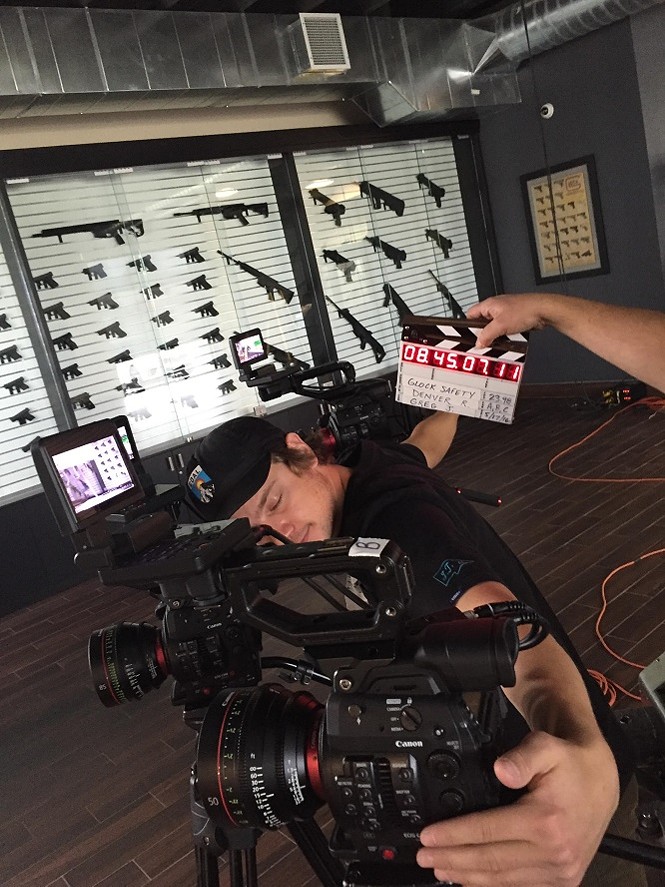 What made you decide to start doing rentals as part of the business?

Like I mentioned before, when we started out, I was renting everything. At the end of my first calendar year (after about eight months of operating), I ran an expense report on the amount I had spent on renting a RED Scarlet from a friend. It was about $14,800! Well, guess how much a Red Scarlet package cost back then? About $15,000. That hit me like a tuck. I went out and bought my own camera the next day. As we started to amass high-end gear, our friends and fellow industry pros started to ask if we rented our gear out. We use our gear maybe 5-10 times a month; the rest of the time it collects dust. So I figured, why not have a little passive income to help pay off [old gear] and buy new gear?

What's been the biggest challenges for you as a production company in Utah?

I’d say there’s been two main challenges unique to Utah: First, it’s finding talent—good talent and ethnic talent when needed. Second, it’s finding clients that are willing to take a risk. This isn’t a problem so much anymore, but in the early days a lot of the smaller companies wanted to make a "viral video," like Dollar Shave Club. Well to make a viral video, you need to be edgy, do something different [and] new, maybe swear a little, show some leg—but they’d all fall back to the safe, boring, local cable TV ad, and their videos would die a slow, lonely death. But overall, I’d have to say Utah has a simply amazing business climate, and Utah is very accommodating to film crews. In other states, that’s not the case. Here people are excited to have crews come in and shoot; in bigger cities, they hate it and make it very difficult.

Do you have any plans to expand into feature filmmaking or producing bigger projects? Or are you good with the business structure you have now?

Yes! Absolutely! But, I want to do it my way, on our time-table and when we’re ready. I want to own all of our own gear to save on expenses, and I want to fund it ourselves so that we’ll own it. Our first film won’t be a passion piece destined for the film festival circuit. Nope, it’ll essentially be a cash grab. I’m going to make the lowest cost, highest profit film I can. It’ll probably be crap—but if it sells, and I make a return, well then, I can do it again—and keep making films for a living!

For those who wish to work with you, what do they need to know and have prepared?

Dammit, have a reel or portfolio, and spell out exactly what your role was in the example work! I go insane when someone emails us, but can’t provide examples of work. Nobody in this industry cares about a resume, degree, or how much you want to work. Show us what you can do! What’s more is, be cool. I’ll hire a good attitude and work ethic over skill set any day.

What can we expect from all of you and the business over the rest of 2016?

Well, we’ve had a pretty crazy last few months. I think once we’re done with this last push, we’re going to go up to Wyoming and shoot guns, fly-fish, and drink (in that order). We have a feature film from L.A. we’re ramping up VFX and color correction for, and a couple of exciting projects for our clients. It also looks like we’ll be traveling to San Fran, New Orleans and New York in the next few months—which we’re pretty stoked about; we love to travel. We’re also developing some products for the industry, but that’s hush-hush for now.