He was set to visit SLC in October. 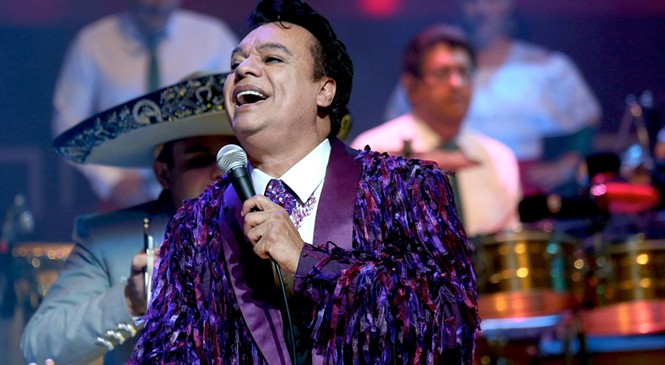 Legendary cancionero Juan Gabriel, one of Mexico's most talented, sublime and flamboyant exports died at his Santa Monica home on Sunday at the age of 66, the Los Angeles Times reports.

The cards were never stacked for Alberto Aguilera Valadez. Hailing from Parácuaro Michoacán, he was the youngest of 10 children farmers Gabriel Aguilera Rodríguez and Victoria Valadez Rojas brought into the world. His story was the definition of rags-to-riches. If there is such a thing as a "Mexican Dream," Juan Gabriel embodied that with glorious sequined and hip-shaking aplomb.

He was discarded from the get-go. After an escape from reform school, where by age 13 he'd been promoted to trash boy, Aguilera was reunited with his estranged mother and took part in several odd jobs, eventually landing a singing gig at El Noa-Noa, a Ciudad Juárez gay bar that would later inspire one of his greatest hits.

As Juan Gabriel, "JuanGa" for short, Aguilera would decades later become one of Mexico's—and Latin America's—greatest singer-songwriters, penning hit after hit (a talent he developed while completing a year-and-a-half stint in prison, where he landed after being falsely accused of theft), going on to sell a reported 100,000,000 albums and shattering machismo norms along the way.

Flat out asked if he was gay during a televised interview with Univision in the mid-'90s, Juan Gabriel famously responded: "You shouldn't ask what you can plainly see, mijo."

A megastar that meant a lot to many people has died, and regardless of any comparisons U.S. media might try to make (many of them reporting on him for the first time), there is no equating Juan Gabriel to any other artist living or dead. Yes, you could say he was Frank Sinatra meets Elton John; equal parts Adele and Liberace or a blend of  Wayland Flowers' Madame and Barry White, and you'd be right.

The truth, however, is Juan Gabriel should be a measuring stick for others. What he elegantly did—not just through song but just by being himself—helped shatter gender norms in one of the most gender-conventional counties in the world. Women openly wept at his shows. Straight men also got misty-eyed, hollered and danced their hearts away.

Prior to his passing, the "Divo de Juárez" was in the midst of his "MeXXico Es Todo" tour.  Reviewing his sold-out concert at the Los Angeles Forum last Friday night, Billboard called it "a bucket list-worthy show" and referred to the person behind it as "the ultimate showman."

Juan Gabriel was scheduled to bring his spectacle to the Vivint Smart Home Arena on Friday, Oct. 7.

In an email to City Weekly, the venue's vice president of communications, Frank Zang, said he's awaiting an official statement from promoters on the show's status, and that refunds will be issued.

He also mentioned the local Telemundo affiliate will be hosting a vigil tonight at 6 pm on the arena's outdoor plaza. The impromptu homage is one of many that have followed in the 24 hours since the superstar's death—from Radio City Music Hall to Mexico City's famed Plaza Garibaldi.