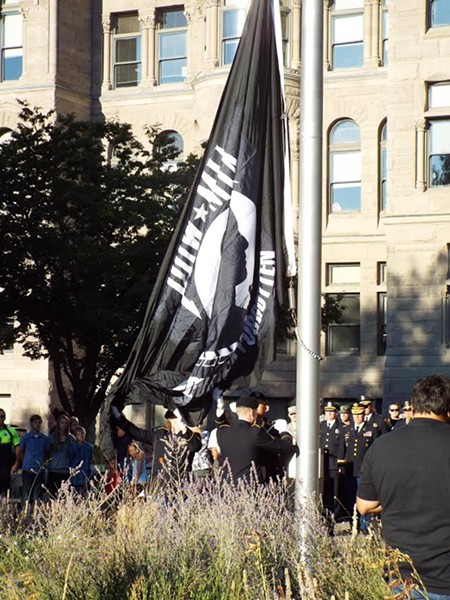 The black and white prisoner of war and missing in action flag that has waved from the flagpoles of the White House and other civic buildings across the country is officially flying for the first time ever in front of the Salt Lake City and County building.

Biskupski noted that the raising of flag is a small gesture, but an important statement to those whose loved ones never returned from battle.

“We take this action out of deepest respect for you,” Biskupski said, acknowledging the family members of two servicemen that attended the ceremony. “Today Salt Lake City stands with you to say ‘You are not forgotten.’”

For Carlos Jimenez, whose uncle, Pfc. Thomas Montoya, went missing in 1952 during a patrol near the border separating North and South Korea, seeing his hometown officially recognize the sacrifices his family member made was decades in the making.

Though Jimenez never met his uncle, he says his presence was always felt—often with tears from his mother. Then, in the mid 1990s, when Jimenez returned from South Korea as a member of the Utah National Guard, his grandfather asked him if he’d find out what happened all those years ago to his son.

Jimenez said he did not know where to begin his search, but soon discovered that the U.S. Department of Defense operates the POW/MIA Accounting Agency, which began an investigation into Montoya’s disappearance.

In 2001, Jimenez said the investigation and his own research helped to paint a picture of the events that led to his uncle’s disappearance all those decades ago. During a patrol, Jimenez says his uncle’s unit came under fire. As the marines fought with Chinese troops, eventually killing 15 and capturing the area, Jimenez says they realized that three of their men were missing. The bodies could not be evacuated, and Jimenez says a plane was called in to bomb the area and destroy the remains.

Many of the men who held possible answers to what occurred during the patrol, Jimenez said, died in combat a short time later. Only one serviceman who was with Montoya on that day remains, and he happened to have snapped a photo through his binoculars of four marines just before they were killed. Jimenez says he believes that one of the marines in the photo is his uncle.

After years of trying to educate people about the death of Montoya and the importance of recognizing service members who never returned from combat, Jimenez says he hatched a plan a couple of months ago to petition Salt Lake City to recognize National POW/MIA Day.

“I thought it was time to educate the community about the sacrifices of all MIA/POWs, not just my family,” Jimenez said.

Family members of Tech. Sgt. William N. Andrews, who was captured and executed by the Japanese during World War II, and whose remains have never been returned, were also present at the ceremony.

Andrews’ niece told the crowd that as she was growing up, the sharp contrast between her family and the one that her uncle, whose airplane crashed during a bombing run and was captured and later executed with several members of his crew, never had, wasn’t forgotten.

The “difference was that dad came home and Uncle Ned never did,” she said.

The MIA/POW flag will be flown every Sept. 16 at the City and County Building, as well as other federally designated holidays in honor of veterans.

Jimenez says he now wants to see the flag fly at the State Capitol—an effort that he says is underway.