The Pipeline: Reading Is Mandatory In PSYCHO-PASS: Mandatory Happiness

September 20, 2016
comment
Anime novella games can either be amazing or complete shit; there's no real middle ground. Even fans of the genre will tell you there are no "okay games" out there. When publishers take an established anime title and turn it into a playable title, you're either given an amazing experience that will leave you wanting more, or you're given one of the worst gaming experiences of the year, where you can clearly see someone was just aiming to get a cash-grab. So even though NIS America released PSYCHO-PASS: Mandatory Happiness for PS4 back on Sept. 13 to a lot of fan excitement, I immediately entered with caution, knowing how it felt being burned in the past. 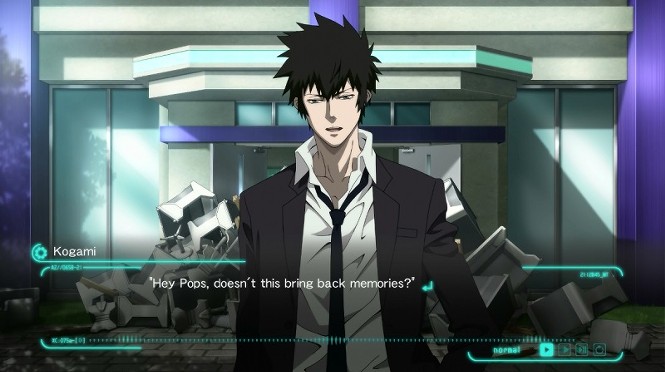 PP:MA is an extension of the Psycho-Pass anime series that ran for one season in 2012, and found much of its popularity in the states when Funimation did an American dub in 2014. The series name comes from the plot where in the year 2112, the governing body of The Sibyl System measures everyone's happiness, and can determine what their mental state is and whether they're likely to commit crimes. Their mental state is labeled and monitored so that if they suddenly start acting up, they can be hunted down and possibly killed by the police force called Unit One. There's a lot to love about the series as a whole, as it explores what it is to be alive and on the powerful side of a dystopia, working to remove those who seek to bring your perfect system down. It seems like it would be an almost perfect scenario around which to build an action game.

The game starts off with some kind of hacker finding their way into a private hospital and stealing the body of a robotic doll; think Ghost In The Shell, only without all the layers about your ghost being your soul. After the body is taken, you can choose between either sex as your lead character, so of course, I went with the leading woman named Nadeshiko Kugatachi. The game loosely ties the but serves as a stand-alone product that doesn't rely heavily on constantly referencing past events. As you make your way through the story, you learn about the primary antagonist called Alpha, who is fighting against the dome-covered city you live in and the government that runs it, trying to bring happiness to people through other means that the status quo doesn't agree with.

The immediate issue I had with the game is that very few aspects of it actually resemble a game. Calling it a novella is because 90 percent of the gameplay is reading the text to a story. There's no animation, simply still frame drawings with the mouths occasionally moving, as the game puts text blocks up for what feels like hours. You'll read for a minute, then a voice-over will kick in for a while, then back to reading, then more voice work. No joke, it takes you an hour to get to anything that resembles gameplay, and at that point, it's simply picking which investigative path you wish to take to further the story. There were moments where I felt like it didn't matter what I chose. The game had a pre-determined destiny where my actions made little impact.

The story has a habit of fluctuating between intriguing and downright boring. The universe this is set in could have been really engaging for a video game: a dystopian future where technology is ruling us for better and worse, complete with rebels hacking the system and making you question your own logic. There's all of this fantastic setup, only to be wrapped up in melodrama. So many bad anime/manga storytelling tropes are layered throughout that initial hour, it makes me cringe: my male counterpart having the exact same personality as me; a young teenage boy on the team pointing out the obvious; at least one sassy female teammate and one bungling doofus male teammate; a boss who seems to know more than he lets on. It was painful for me, as a writer, to endure. Ultimately, while there were peaks of enjoyment, it felt like a lost opportunity.

The game is aimed at one kind of player: gamers who love Psycho-Pass the anime series. Unless you've watched the show and know what's going on, the game does a poor job of bringing you into this world. Imagine being told the plot to Cowboy Bebop or Full Metal Alchemist through five minutes of text without a voiceover and only 10 frames of imagery. You probably wouldn't dig it, and it's hard to imagine anyone else would. And this is coming from a person who has watched the show and knows what's going on already.

The story itself, once you get through the tropes and unnecessary banter, is well written, and would have made an excellent addition to the show if they went in that direction. But I would have had a lot more fun doing real detective work and hunting down the criminals, kind of like what Telltale Games does with its games.  If you love the series, PSYCHO-PASS: Mandatory Happiness is at least worth your time to check out. But I can clearly see average gamers getting bored and turning it off—or worse, falling asleep mid-story.