The Pipeline: The Wild Ride Behind This Mother Clustertruck | Buzz Blog

The Pipeline: The Wild Ride Behind This Mother Clustertruck

The chaotic and frustrating indie platformer from tinyBuild Games.

September 29, 2016
comment
Earlier this week, we reviewed one of tinyBuild Games' more expansive and experimental games, Diaries of a Spaceport Janitor.  That game has great potential for depth and  fun depending on what you choose to do with it, but that's on a very specific side of tinyBuild's spectrum. Clustertruck is a fine example of what's on the other side of the spectrum—and that side is chaotic, frustrating and silly. In the world of platforming games, this one is bound to piss off a great many who love a challenge.

Clustertruck is pretty much how it sounds and looks: You are a faceless jumper looking at a series of semi trucks in the first-person view, all pulling trailers that are wobbly as hell.  Your job is to jump from truck to truck as they move along and reach the goal without dying. Sounds simple enough, right? Unfortunately for you, these trucks are driving in areas that are even less stable than I-15; you'll have to deal with rocky roads, cliffs with big dropoffs, forests with rocks, major obstacles in the air, ice and everyone's favorite, exploding cargo. You will die. Frequently. Sometimes right out of the gate, if you're not paying attention. 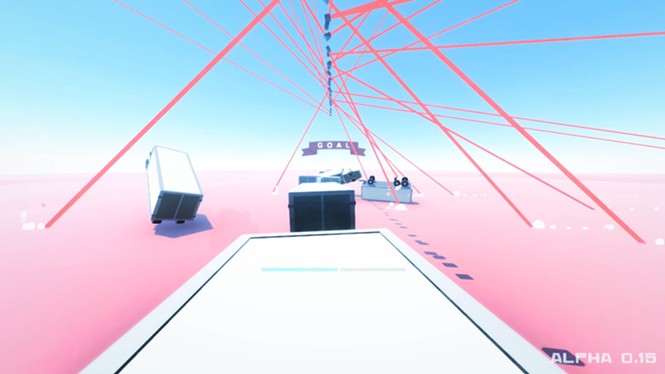 The controls are pretty smooth considering what you have to deal with. You'll want to play with a controller, as a keyboard may not give you the steady ability you want. Aside from the directional controls and a jump, you also have a dash option by holding down the right trigger, so the pace at which you get to where you want to go is totally dictated by you. As you progress through the game, you'll earn extra abilities, like a double-jump or a "shitty jetpack," which will give you more options to navigate your way toward the front and across the goal. The only thing you can't control are the trucks and the environment, both of which will randomly change each time you re-spawn. That means there's no set pattern for you to follow; you can't just jump on the same line of trucks and get the same results. It's an ever-changing setup that you'll need to adjust to each time.

Probably the most frustrating part of the game is that the trucks seem to be controlled by an AI that makes sense. Let's say a truck sees a boulder coming, and it knows it's going to be crushed. In that case, the truck will move out of the way. But what seems like a cool safeguard actually throws you off, because the truck won't go back on course toward the goal; it will move away in a direction where more boulders can't hit it. So if you stay on board that truck, you'll be taken away from the rest of the pack headed to the goal, and will instantly lose.  Every decision you make has some kind of impact, especially when you start getting into levels where every two seconds there's a new obstacle or exploding-truck moment. The game will get your heart racing, but will annoy you to no end that it takes 70 tries to beat one level. 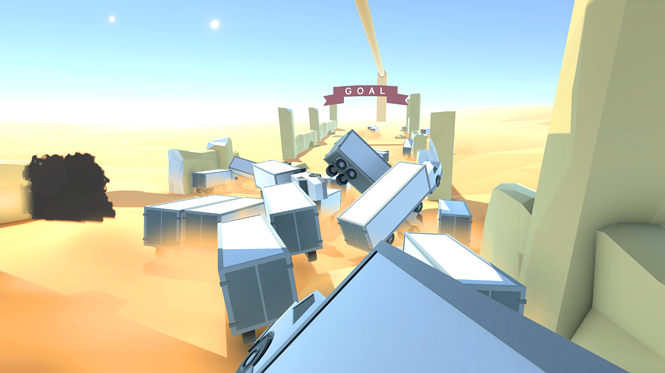 Ultimately, Clustertruck is fun, but it becomes tedious after  you get to level five. At a certain point, it does feel like the developers looked at the design and said, "OK, what new junk can we throw in their way this time?" That may make for a great challenge, but it doesn't make for a great game, especially when you're just designing levels with unpredictable aspects that will eventually frustrate the player involved. Every level may have a solution, but that doesn't mean the solution will work every single time—and when players realize this in other games with the same kind of design, that's when they hit a breaking point and put the game away. If you're looking to your reflexes in the middle of nonsense, this might be for you. But if you're looking for a platformer with some kind of satisfaction beyond just completing a challenge, this isn't one of them.