The Pipeline: The 9-5 Worker's Dream Come True In Office Freakout

The latest title from Hollow Robot lets you destroy the cubical world.

October 04, 2016
comment
In my life, I've rarely had what you would call a "traditional" office job. Oh sure, I've had jobs where I've been at a desk with co-workers, but only one of them actually involved sitting in a cubicle for hours on end. And at the time I experienced that job, I knew that was never the life for me. So I always feel a sense of remorse for my friends and family who do have that kind of job, and probably sit at their desk every day wishing they could destroy everything around them after being asked for the 1,000th TPS report. Luckily for the many people who have to deal with that kind of garbage, there's a new game that will allow them to take out their rage in style, as Hollow Robot released Office Freakout on Sept. 27.

Billed as an "anger management simulator," Office Freakout puts you in the life of Philbert—an office worker who has just been shit-canned, and now feels the need to take it out on anything and everything in his path. Every level has you punching your way through office equipment and your former co-workers' cubicles to amass points. When you reach a certain amount of points, you'll need to search for a golden key to reach the elevator and get to the next level. Fail to do so in time, and you'll have to start that level from scratch.

The gameplay has some awkward controls that get easier with practice, but still throw you off. You punch with a left click as you use WASD to move around, but you need to hold the Shift key to get in faster blows. The right click picks up items, which will end up being a muscle memory thing for mid-'90s gamers who enjoyed hack-and-slash titles. As you progress you build up your rage meter, which causes greater damage to everything around you. As you progress you meet co-workers who attempt to stop you, and you gain the ability to add and find better weaponry to do greater damage in shorter points in time. Which you're going to need to be smart about, as each level becomes bigger and a greater hassle to navigate. There are times you'll find yourself starting the level over several times as you run out of time, or the key is placed in the one area you haven't explored yet.

One of the biggest issues I had was that the game ran clunky as hell. I'm running a pretty badass gaming computer, and everything about the graphics seemed like I was playing at half speed. The videos did not match the audio, the tutorial took way longer than it should have, and the graphics seemed to go off the rails mid-destruction. The menu system is of little help either, as any time you try to learn something to navigate the options, you're given a voice-over that you need to sit through in order to make them happen. I found it easier quitting the game and starting over from where I left off than sitting through anything. When I need to hit the proverbial reset button to get anywhere, I know what I'm playing isn't up to snuff. 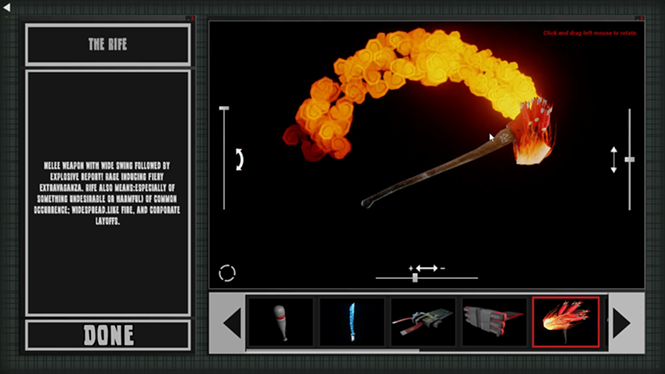 As you advance, one of the bonuses you're dealt is the ability to change the theme and look of everything you're destroying—color schemes, patterns, wallpaper, the whole nine yards as far as office decor. While that may be a cool option to add into the game, it doesn't really affect anything beyond the visual. There are moments where it feels like a poor substitute for what could have been better add-ons, but then again, the objective for this game is pretty cut and dry. What you're doing is simplistic, so of course the bonus options would be, too. The only really cool addition is the weapons that you can upgrade to, but you're going to be doing a lot of smashing and getting perfect rounds in order to get to the truly powerful items.

Overall, Office Freakout is the kind of game you need at work. While it is kinda fun to play, this isn't the kind of title you'll pour hours of time into, or hope to complete in order to mark it as an achievement. It's dumb fun meant to help you take out stress in a fun way, and because of that trait, it belongs on your work computer for when you're at lunch. If you can get past the clunkiness and repetitive behavior, it'll give you hours of quick fun. But don't give it too much thought, or you'll probably beat it or tire of it quickly.