Spellbind Studios finds a perfect mix of RPG and pacing.

October 11, 2016
comment
I love a good RPG, but finding one always comes at a cost. There's a handful of good RPGs that come out every year, and a slew of terrible ones that, for one reason or another, can't get the mechanics right. And it doesn't matter how many patches or updates the developers of the bad ones throw in to fix everything; once it has that stench on it from the initial startup, it's hard to go back to it. It's probably the reason why all the RPGs I've loved over the years still resonate, because when you get it right the first time, it stays with you. So anytime a new RPG comes my way, the teenage gamer inside of me is worried about having my heart stomped on with bad gameplay. But as tradition, I snagged myself some nachos and a soda, threw on some alternative rock in the background, and hunkered down for Spellbind Studios latest game (released on Sept. 27), Rogue Wizards.

The game starts you out by letting you choose your character's gender and name. I went with a woman, and got the name Zaria from the built-in random generator. You're immediately thrown into a dungeon where you haven't been fed in over two days, when suddenly, you find a magic scroll that sets your destiny in motion. You're bound to the scroll, so there's no way to say no, and off you go questing. You'll beat up enemies and be given an immediate choice of weapons to pick up off the ground, which range from brute force clubs to sophisticated bows for archery attacks. When you finally find the portal out of the lair, you're told that an evil wizard has been using his powers for no good, because that's what all evil wizards are up to these days. It's up to you to go after him and end his reign of terror!

The game implements mechanics from a few different games, the two most noticeable being Final Fantasy Tactics and South Park: The Stick Of Truth. Now, to a hardcore RPG player, that may not seem like a great combination, but it's the subtle additions rather than the fan-favorite aspects that help the game flow better. First, you're using a diagonal grid system to make your way around, but it uses a point-and-click system, so you chose which grid you go to immediately. This makes the combat system quicker, and navigating long dungeons a little easier (especially with the map in the upper-right corner). Shopping for equipment isn't hard, as enemies will probably drop better items than you can purchase all over the place, including gold, potions, armor and weapons.

Equipping characters is as easy as right-clicking to change it onto your person, as well as selling off all the useless stuff in your backpack quickly. Everything that would normally be tedious and time-consuming is boiled down to a 30-second glance-and-click system. This includes the combat system, which allows you to target single or multiple enemies with fast inner-timers to decide how quickly everyone can attack. A standard dungeon the size of the ones you see in Rogue Wizards would take a regular game an hour to get through, where this system allowed me to breeze my way through two of them in 45 minutes. That's a weird kind of satisfaction you can't really get in many RPGs. 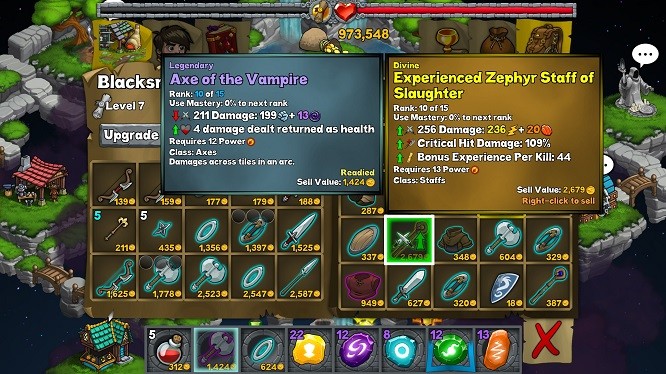 The game also incorporates a magic system that is more of a learn-as-you-go kind of metric. You start off with pre-determined spells, but as you progress, you can open up different spell types linked to six different colors, which you'll pick up items for in every level to help power them, and count usages. The experience system is also simplified, as it tracks everything you do and immediately gives you the opportunity to dump everything into one of three attributes. You can parcel everything out, or you can dump all your experience into one area. There's no right or wrong way of doing it all.

This may seem like a lot to look over and dump onto a regular player, but the system is devised so that you're not just given all these tasks at once. In fact, this is about as well-balanced a management system as I can remember dealing with in a long time, which was both satisfying and helpful. And that's a key word to use when it comes to RPG playing: helpful. Even the greatest of the great RPG players have dealt with leveling systems that are ever-harder to analyze until you screw up several characters. This genuinely feels like it was devised for gamers who despise those systems with all the boiled blood they could muster.

Beyond the dungeons is a small village being built on some ethereal plane, complete with shops and taverns and the like, where you'll interact with characters you meet along the way, along with pets you kind of collect who help you in battle. It's here you learn more about the story that we've kept mostly spoiler-free, mainly because it's more of a storybook narrative that is better told through gameplay than explaining all the intricate details here. You'll use the portal system to go from dungeon to dungeon, ultimately conquering areas as you rid them of the multiple villains who wander the caves, all with a nice fantasy soundtrack in the background.

Rogue Wizards has a lot going for it that in no way cheapens the experience, and will give RPG fans something fun to gravitate to. It's the kind of game where if you had a free day, you could totally finish in a single sitting, but this is more like a tasty candy bar than you'll snag a piece or two from at a time, then come back later for more when you remember how good it was. I totally recommend it for gamers of any age, as this system is probably one of the best to learn and adapt through, and there's something worth commending when you can give a younger kid an RPG that you know they'll do great at.