The Pipeline: Hello Neighbor Makes Me Question All My Neighbors! | Buzz Blog

The Pipeline: Hello Neighbor Makes Me Question All My Neighbors!

A look into the pre-alpha version of tinyBuild's latest game.

October 19, 2016
comment
Anyone who has seen the movie Rear Window knows the plight and perils of neighbor paranoia. More than 60 years later, the film still holds up as one of Hitchcock's masterworks, as Jimmy Stewart and Grace Kelly spy on a neighbor across the way who they believe murdered his wife. It spawned a new twist on suspense thrillers, and made people terribly paranoid of the creeps that live next door. I kept thinking back on that film fondly as I tried out the pre-Alpha version of Hello Neighbor  by tinyBuild Games.

Neighbor puts you in a first-person view as a homeowner with a not-so-normal neighbor across the way. Just observing his home at night, you can see a glowing door in his living room, which by default you're so curious to see, you'll do anything to take a peek. It's your job to cause distractions by any means necessary, sneak or simply break into his home, and make your way into the forbidden area without being caught. Or, when you do get caught, find new and inventive ways to break through the barriers and traps set in your way to get where you need to go. 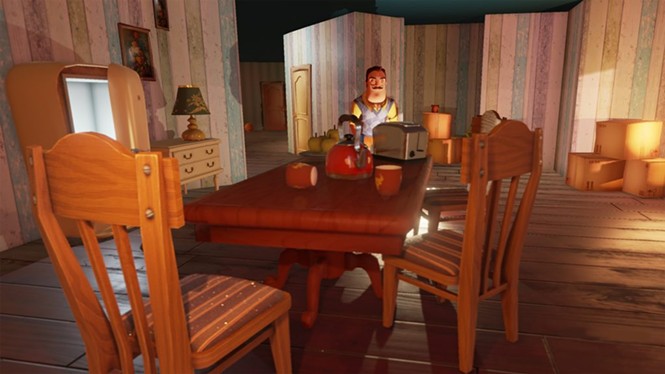 The game itself seems basic on the surface, but gets super detail-oriented as you go. A lot of the gameplay revolves around pre-planning for distractions and strategy, followed by a combination of flawless execution and quick thinking once something goes wrong. A good example of this would be finding a combination code to the door, which is hidden behind a painting in a hallway, which you can only see through black light, which all happens to be in eyesight of the neighbor. Using junk in your front yard like an alarm clock, or a television to make noise and cause him to move, you then have an opportunity to get into the home, provided those areas aren't blocked off or locked. When the neighbor spots you, the scary music immediately kicks in, and you'll need to run like hell. If you're caught, you'll start over back at your home with no progress saved, and the neighbor reset to your last achievement. If you make it back to your place and go to bed, your progress will be saved—but the neighbor will be a little wiser. 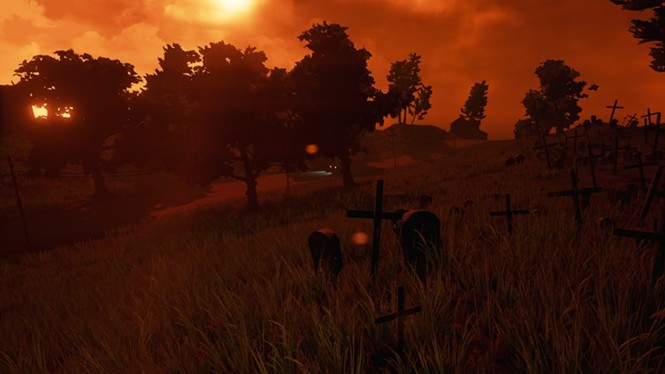 The game is actually quite nerve-wracking in terms of quick thinking and suspense. You're never quite sure where things will be coming from, and often the situation where you find yourself is unfair. But keep in mind, the version I tried hasn't even hit the Steam marketplace yet, so a lot of the difficulty may just stem from the fact that they haven't gotten all their ducks in a row. But what we're given here as far as challenges  can actually cause you to sweat and get very twitchy while figuring out the neighbor's next move. You'll hear doors randomly open and close as he moves about, or objects are not where you need them in time to make your plans happen. This is one title that will keep your fingers active and your wits on end, and it doesn't even need horror to do it. 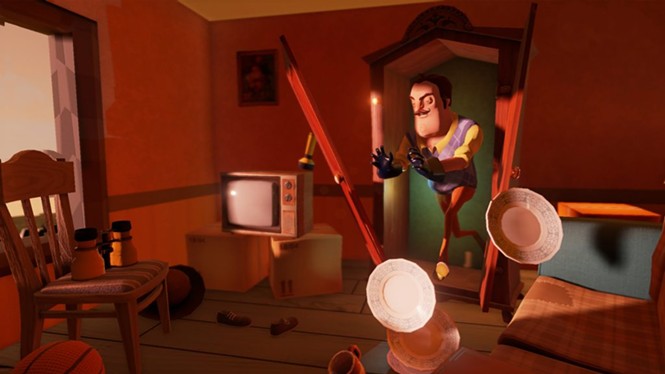 Overall, for a pre-alpha, this is a pretty sturdy game. Sure, the neighbor walks through the fence once in a while, or can see you the minute you walk out the door on occasion, but it plays well, and delivers a far more suspenseful experience than many jump-scare games. While it's good to know that this isn't the final product, it's also a shame to know that the target date for release is summer 2017. Hopefully, by then there will be much more content added, and an even greater challenge to the homes you'll be exploring.