A look into the latest production from PYG's 2016-17 season.

Continuing through the theatre season, the next local premiere comes to us from Pygmalion Theatre Company as they present Catherine Mary & Myra. The two-act production focuses on Myra Bradwell, and her attempt to free former first lady Mary Todd Lincoln from an asylum after the latter was committed by her own son. Today we chat with the playwright Filloux, director Fran Pruyn and the actresses playing the leads, Tamara Howell and Teresa Sanderson, about the play as we head into opening night on Oct. 28.  (All pictures provided courtesy of PYG.)

Gavin: Hey everyone! First thing, tell us a bit about yourselves.

Fran: I am the artistic director of PYG and the director of this show. I have directed a ton of shows over the past 30 years. During the day I am the senior principal at an architecture firm responsible for marketing and business development. Sometimes I also ride my horse.

Catherine: I have recently completed a new musical, All Dressed Up And Nowhere To Go, with composer Jimmy Roberts (I Love You, You're Perfect, Now Change) about a group of Amish people and a group of cross-dressers snowbound in a motor inn in Buffalo. I am also a librettist working on my fourth produced opera. Olga Neuwirth will compose the opera Orlando for the Vienna State Opera, based on the novel by Virginia Woolf, for which I am the librettist. My national work includes the plays Selma ’65 about the Selma voting march and the Ku Klux Klan, and The Breach, about Hurricane Katrina, which I wrote with playwrights Tarell McCraney and Joe Sutton.

Tamara: By day I am a junior high theater teacher, where every class is a "Drama" class. I'm also a mother of three amazing kids!

Teresa: I have been around for a long time now, about 30 years, and I love this town and the artistic community here.

What have each of you been doing over the past year in theater?

Catherine: My new play Kidnap Road will premiere in 2017 at La MaMa in New York City April 27 to May 14.

Tamara: Earlier this year I played Chris Remington in Remington and Weasel here at PYG. I also did Titus Andronicus with Pinnacle Acting Company where I played Saturninus, Emperor of Rome

Fran: I have produced three shows for PYG, directed PYG’s section of Rose Exposed and was involved in When PYG’s Fly. I have been researching Mary Todd Lincoln and Myra Bradwell. Oh, and I have seen a lot of theater.

Teresa: I just finished playing the Emcee in Cabaret for Utah Rep. I had such a great time spending my summer with that amazing cast and crew. Busy at the Davis Arts Council too with our summer concert series, had fun with the Beach Boys, Styx and Chicago (to name a few).

Catherine, how did the concept for Mary & Myra come about?

Catherine: I heard about Myra Bradwell, the first woman lawyer in the U.S., trying to rescue Mary Todd Lincoln from the mental institution where Mary was committed by her son. I had never heard of Myra Bradwell, and when you see the play you will learn why. Before I decided to write the play, I wanted to know how I felt about Mary Todd Lincoln. I read all that I could find about her; a compilation of her letters was especially striking for me, as was an analysis of her time in Bellevue. I wanted to cast history in a new light. Mary & Myra is not a biopic in nature. And you’ll see that Bellevue, the mental institution, had some curious and eccentric practices for “curing” women of “insanity.”

What was it about these two figures that captivated you to make a play about them?

Catherine: I began writing plays about PTSD when it wasn’t a known acronym. I was captivated by the propensity in Mary’s time to institutionalize women not diagnosed with mental illness. One of the themes in my new play Kidnap Road is the backlash against women leaders. Mary was in the public eye and maligned by the male press. And the divisions, the lines in the sand, are sometimes also made by women.

What was it like hammering out the play and eventually bringing it to the stage?

Catherine: If this were a recipe for a chocolate éclair, I’d say 1/3 research, 1/3 hearing the play in closed readings and doing rewrites, 1/3 doing more rewrites in rehearsals for the premiere. But why am I bringing up a pastry? I should have said a griddle-cake. Mary had some very interesting opinions about French food, which you’ll learn more about.

Fran: There is a lot of research involved in doing a piece of historical fiction. Even though we aren’t trying to create total historic accuracy, we also don’t want to draw attention by being completely inaccurate either. This meant exploring everything from the two real people, to what asylums were like, what it meant to be a woman in the 19th century, even what travel trunks looked like—especially since she had so many. Then with all that baseline of information to draw upon, we had to create our interpretations of Mary Todd Lincoln and Myra Bradwell, their relationship, this situation, and what we want to communicate to the audience about them. Even though I have always known my generation of women have it comparatively easy, these two women had challenging lives.

Fran, how did you first come across Mary & Myra, and what did you think of it?

Fran: PYG mounted a production of Hellman v McCarthy by Brian Richard Mori a couple of years ago. Lane Richins (who directed HvM) got to know Brian, and through him, his colleague, Catherine. Cat gave Lane two shows for us to read: Selma ’65 and Mary & Myra. We loved them both and almost immediately decided to do both of them. They are both historically fascinating, but also richly lyric. They are small-cast shows about important moments and people in history. I also thought that Mary & Myra was extraordinarily funnier than a play about Mary Todd Lincoln would be.

What made you decide to bring it to Pygmalion for this season?

Fran: It fits our mission statement exactly, is very producible, is a great acting/directing challenge, and we believe will pique the interest of our audiences. 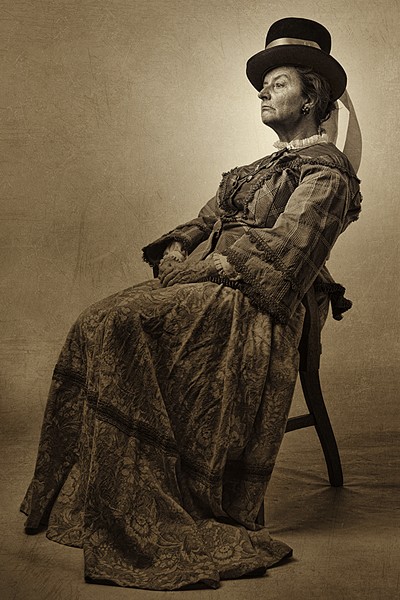 How has it been for you directing this particular venture?

Fran: I have a fabulous, committed, artistically flexible cast, an amazing subject, and very creative designers. I love to do the “dramaturgical” part of theater—the research—and this show has really necessitated doing it. In other words, it has been wonderful.

Tamara and Teresa, what were your first impressions of the play?

Tamara: I fell in love with Mary Todd Lincoln. Catherine has drawn two very compelling characters. It has been interesting finding the balance between what we know (or think we know) about Mary, the actual woman and what Catherine has created for her as a character.

Teresa: I read this play about three years ago in search of season material for PYG, we read two of Catherine's plays, and ended up producing both of them. Mary & Myra struck us immediately. Cat has drawn some beautiful characters about a fascinating story that none of us had ever heard before.

How was it for each of you getting into your roles and finding these characters?

Teresa: It is always awesome to play a real person, there is always a wealth of information. I have to be careful not to spend all my time reading about them. I really love research.

Tamara: I've never played a historical figure before, so it's been fascinating to research her life and incorporate that into the story we are telling.

What would you say has been your biggest challenge as actors in this play?

Tamara: It's an extremely challenging play both physically and mentally.

Teresa: Lots of lines, names, dates, props, letters, newspapers, period clothing, dressing and undressing myself and Mary on stage, jumping on the bed, wrestling on the floor, and I could go on. It doesn't lack in the challenge department.

How has it been interacting with each other and bringing the production to life?

Teresa: I love Tamara. There are few people I would rather share a stage with. I love working off of her; it feels like we are really friends. Probably because we really are. Sordid Lives involved a gun and underclothes too, now that I think about it.

Tamara: In a two-person play, you have to rely heavily on your partner. Luckily, Teresa Sanderson is one of my favorite humans, so working with her is really play! She is fantastic to work with!

Tamara: How did these women stand all these clothes?

Teresa: The devil is in the details. I always wish I had another week.

Fran: I hope that the audiences are as amused and touched by these two women as I have been. I also hope they realize how only a relatively short time ago, women were the property of their husbands and male relative and subject to their dictates and whims. Mary was eccentric, and a spendthrift, but it well might be that her son had her institutionalized to save himself the embarrassment of having an eccentric mother who wanted control of her own money.

What can we expect from all of you over the rest of the year and going into next?

Fran: I will be working with PYG to produce the two other significant pieces of theater that we are doing: Eleemosynary and Silent Sky.

Catherine: My most recent play, whatdoesfreemean?, is about women and mass incarceration in the U.S., to be produced by Nora’s Playhouse in New York City in 2017. When I visit for Mary & Myra, I am looking forward to spending time with my family in Salt Lake City, introducing them to this play, seeing friends, and doing some running. I’m thrilled to back at Pygmalion and thank Lane Richens and Fran Pruyn.

Teresa: I am looking forward to enjoying this run, then I will be back in PYG's season closer Silent Sky.