The Pipeline: Eon Altar Offers Me A Misfit RPG Run

November 01, 2016
comment
If you haven't been paying attention to the latest in RPG discussions around the web—which is totally acceptable for an average gamer—you've probably missed out on the back-and-forth over the Flying Helmet Games RPG Eon Altar,  released back in June.  The game operates off the unique mechanic that your smartphone is the controller, utilizing an app that works with the software. It's a nice innovation for a genre that rarely dabbles in modern gaming accessibility, especially one that's more familiar with party titles. But it caught the attention of the gaming community, both for good and bad—so when the opportunity came about to try the second chapter, "Whispers in the Catacombs," I decided to give it a shot. 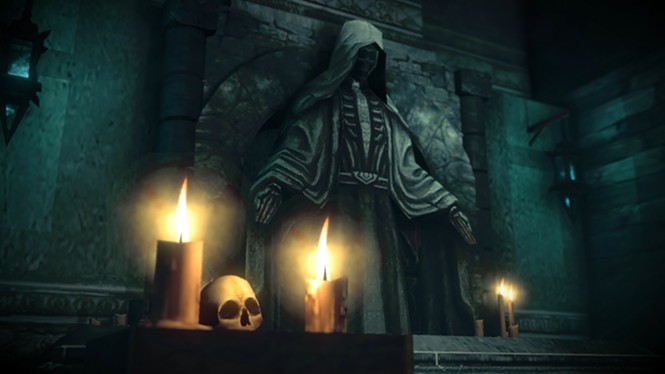 Eon Altar starts with a vague but cool story, as you and your companions (if your friends join in) are currently engaged in battle and are about to begin a siege on . You get a little back-story about how gods used to rule everything, and how their return has been predicted, as it is with many fantasy worlds with random magic we can't explain. The game will put the primary action up on the screen while it sends text information and actions to your cell phone. You have a co-op option, but only locally tied, as you'll need friends to play with you in order to do anything as a group. The lack of online play, for what is essentially a much more interactive MMORPG, feels lacking, and makes me wonder what could have been done to enable this feature.

The lag on the gameplay is probably the most annoying aspect. Making a command on your phone, whether an action or movement, feels unresponsive at times, and completely lacking at worst. The one area it actually works well in is the combat phase, which is turn-based, so you have an opportunity to take a moment to evaluate everything before making a critical decision. On a more interesting level, the combat actually takes into account everything nearby—which includes objects, enemies and other players. So if you choose a magic or combat option that attacks a certain range or line of targets, and one of your buddies is close, there's a chance they'll take damage as well. That means you won't just be coming through and slaying everything in your path; you'll need to strategize with your teammates as to what you're actually doing first before someone takes damage as a consequence of poor planning.

The levels and characters are well-designed, and allow for a variety of scenarios. There isn't a great way to predict how a battle will go, and the environment plays into it just as much as the characters you're dealing with. One of the elements of the game that appealed directly to me was that it plays more like an actual session of Dungeons & Dragons, and less like a World of Warcraft knockoff. The idea that my decisions have a greater impact on not just myself and my stats, but on my friends and the world around me, felt much more genuine.

The biggest takeaway from Eon Altar is simply that it's a great at-home RPG, but it comes with a lot of flaws with the app. If I were playing another at-home multiplayer game—Gauntlet, for example—and I ran toward an enemy to defeat it, I would be far more aggravated with my experience if it took my character an extra three or five seconds to move there, and possibly take a ton of damage before reaching my goal. And that's the downside to playing mobile: We're not quite at the point where the delay in technology is less than a second. It's not even that instantaneous with games like the Jackbox series, and they're pretty on-point. I highly recommend it for RPG players, but expect a little bit of challenge when working the controls.