The Pipeline: Hacking My Way To A "Better" Society In Watch Dogs 2 | Buzz Blog

The Pipeline: Hacking My Way To A "Better" Society In Watch Dogs 2

November 21, 2016
comment
Back in 2014, a lot of us who enjoyed Ubisoft's games were losing our shit over Watch Dogs. We were finally getting what appeared to be a true hacker's paradise in the not too distant future, complete with a badass look and feel that made hacktivists look like major archetypal heroes. What we got was an Assassin's Creed clone that seemed fresh at the start (even receiving high marks by many reviewers), but over time wore thin on the players. (I gotta go to the top of a building and hack a tower for area info? Much like climbing to the top of a church and getting a look at what's below me?) The success in sales pretty much guaranteed we'd be seeing a sequel in due time, but ultimately there was a pervasive thought among the fans that the series needed to grow beyond the confines of a game we'd already been given before.

Enter Watch Dogs 2, released last week on PS4, Xbox and Windows. In a San Francisco Bay Area setting, you play as Marcus Holloway, a young and talented hacker who managed to break into Blume Corp. HQ and delete his entire online and criminal profile. Little does he know the hacking group DedSec has been watching him, and ends up recruiting him that night for pulling off such a badass feat. It's here we learn that all your efforts from the first game (you know, the one where you turned into The Vigilante and exposed a bunch of corrupt people) meant absolutely jack shit. The ctOS system is now live in multiple "smart cities" across the country, and San Francisco is one of the major hotbeds for expansion and hacker rebellion. The system is now so corrupt that it brings false charges against innocent citizens, helps deny them health care, spies on people in their homes, and ultimately controls the destiny of many citizens in the Bay Area. It's up to you to expose the corruption yet again, while trying not to get caught.

A lot of the elements from the first game are back, as you can hack people's data and use it against them. Your phone is an all-in-one cyber terrorism device where you can read info, steal cash, rig systems to be disabled or take people out, even cause major damage around the city. You get the additional benefits of operating a jumper and drone, as well as 3D printing your own set of weapons. There are tons of tools at your disposal, even going into melee attack mode with an 8-Ball tied to a bungee cord. In theory, if you're calm and collected, you could pretty much do this entire game just by hacking and avoid human interaction. As you collect items and succeed at missions, you'll be spreading the word about an in-game app that allows your team to collect data and use it against Blume, all while spreading the word about your great cause. This will also allow you to build up your skills as you learn new techniques and become a better driver, fighter, shooter and overall elite hacker.

Sadly, that's where a lot of the originality ends in Watch Dogs 2. The game still plays out like an Assassin's game, where you'll be picking missions based on location and each achievement brings you one step closer to your main objective. That isn't a terrible gameplan, but it leaves little room for you to just be a hacker for the sake of hacking. All the side missions tie together, like a gigantic internet tapestry, where the end result is to bring down Blume and open people's eyes to the truth. But that's not how real hacking works in the eyes of those who practice the art. Putting dramatization aside, many who hack in real life do it for fun or for knowledge or just because they can; few do it for noble causes or aiming to change the world. And the ones who do most likely don't live a lavish lifestyle where they can just transfer tons of funds in an instant and buy new clothing and toys on a whim. You can have the main storyline intact without any issues, but it would have been much more fun hacking just to be a smug asshole. Or be tasked with trying to track down rogue hackers who have no allegiance and, much like Michael Caine describes in The Dark Knight, just want to watch the world burn. 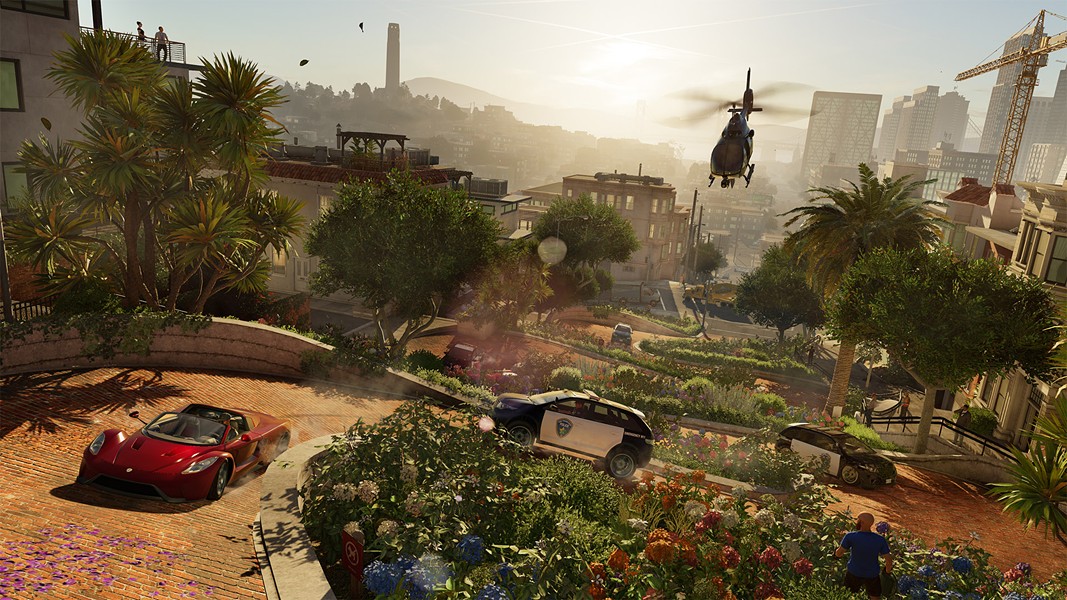 The element that is simultaneously refreshing and frustrating is driving your vehicles. The mechanics of the first game were clunky and caused much more problems when running from the law than a lot of third-person shooters, so this time around Ubisoft gave it an overhaul. However, it now plays more like Grand Theft Auto V, minus the ability to pick up hookers (at least, that I know of). Running from the law and shooting people on the go is a breeze, but it feels out of place in a game where I'm supposed to be smarter than the system. Putting some actual thought into this: If I'm the badass hacker I'm perceived to be, why would I put myself in so much danger with a high-speed chase? I get why it's there as part of the game and the storytelling, but it still makes zero sense. At that point, especially with Ubisoft having weekly challenges with cars and motorcycles as part of the online content, I feel like the hacking is secondary, and just there as a plot device to sell another GTA game. I might as well be The Warlock in Live Free Or Die Hard.

There's a really good game in Watch Dogs 2. I love the story and the concept; the inner anarchist in me is satisfied with the way the characters interact and approach things. I'd go to this movie if they made it. But there are points where it suffers from being in the shadow of better titles. I understand the need to create some kind of familiarity with gamers so that they don't have to relearn an entirely new system, but I also don't like playing the same game with a different skin. Ultimately, I'm going to keep playing and beat it because the story has me invested, but I don't think it's worth $60, and I don't think it's the best game Ubisoft could have created for this series. play it, but maybe wait for the price to drop.