The Pipeline: Cyber Chicken Is Just Dumb Fun For Platformers

Clucking along with the latest game from Groupees LLC and WHOA!

December 01, 2016
1 comment
Not every game can be intelligent as all hell; some are just there for the sake of just being there. And as much as I would like to believe that average gamers are just a tad more intelligent than some average TV watchers, the truth is that a lot of them prefer jock-mentality games as opposed to anything with a real story. So strap in as we take a look at a future with talking animals and corrupt politicians with WHOA! and Groupees LLC's latest action platformer, Cyber Chicken.

is a self-aware platforming shooter where you command a beefed up chicken with robotic implants and a voice like Arnold Schwarzenegger, busting up the bad guys in a futuristic society where the government, the media and practically everything else in the game ruled by an evil badass called Nob Muckerburger. The game employs a 2.5D view to give the area you're playing on some depth, but the background only plays a minor role in the gameplay. You'll wind your way through pathways, beating up enemies and shooting whatever else may try to smack you down as you go.

A lot of the game relies on a combination of strategy and brute force. You could easily just make your way through the game shooting everything in your path and hoping to survive a few extra minutes, but eventually, the game does catch up to you and hammers you down in damage. You'll need to examine what lies ahead for a moment and decide the best attack. As you progress there will be areas where you can upgrade your melee attack or your weapons, each adding their own unique characteristics to your attack. The melee is great for multiple close enemies, but you'll need to master the gun with will require a bit of your part, whether it be through mouse control or the joystick. Simply shooting does not guarantee a kill; you'll need to practice to get good at it, and there's little learning curve. 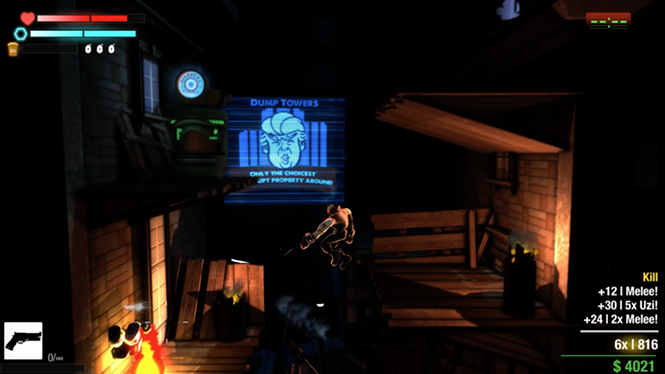 The game features a character called GW who tells you what you'll need to do each level, an obvious callback to George W. Bush. The game is pretty unapologetic about branding him as a lowlife that you do business with in order to reach a common goal. You are basically the Terminator in a chicken's body working for the previous U.S. President, with an obsession for coffee and keeping the streets peaceful, so derive from that whatever you'd like. The story itself is no two ways about it, this entire game sounds like it was recorded on the fly in someone's basement, and they created the game around that script. There were moments I genuinely wanted to skip past all the fluff and get back to shooting, but you have to sit through fake propaganda that feels outdated at best.

The downside is that the game gets repetitive quickly. Normally as you progress through a platformer, each level increases the difficulty, or at least some aspect where you need to adapt and become better to overtake it. Not in Cyber Chicken, as the most challenging I had to deal with was climbing boxes and figuring out what parts of the level I could jump on. Making my way through the first four levels was about as basic as it could get, and if it wasn't for the random gags and pieces of attempted humor throughout the level, I would have turned it off from boredom.

Ultimately, Cyber Chicken is alright, but it isn't what I would call a great platformer. There's a lot of high school humor spread throughout the game, and if that's something you enjoy, this will be the game for you to chill out on after work. But for platform players who want a little more challenge and a tad more substance behind what they're playing, best to stay clear of this one.