There's little doubt that Provo has become the unofficial improv capital of Utah. The city has more improv groups and official improv than every other city, thriving because of BYU and UVU's strong acting communities. One of the most recent venues to open up this year is ImprovBroadway, which found  a spot 900 East and shop for improv nights, as well as teaching multiple acting classes. Today we chat with the director of the company, Zach Atherton, about helping found the group. (All pictures provided courtesy of ImprovBroadway.)

Gavin: Hey Zach! First thing, tell us a little bit about yourself.

Zach: I am a 27-year old improv comedian with a law degree and Masters of Public Administration, making me the most unnecessarily educated comedian in Utah.

How did you get involved with theater, and what specifically drew you to improv?

I did musicals, plays, and choir all through my youth, but improv comedy is what stole my heart. I grew up thinking the cast of Whose Line is it Anyway? and my comedy heroes from Saturday Night Live were a bunch of wizards who had sold their souls for their comedy talent, but when I learned that improv is a skill one could practice and learn, I was immediately hooked.

Did you seek out any education in performing arts, or was it more learning from groups and acting classes?

In college, I minored in music and theater. BYU-Idaho offered a 2-credit improv class, and I took it six times. Most of my improv education came self-taught, and forcing my friends to practice improv with me every day of the week.

When did you and Brady Amundson first meet up and become friends?

Brady and I both got our start in Utah comedy from ComedySportz Utah. I was working on ImprovBroadway when I saw him rocking the ComedySportz main stage show, and I just had to have him for my own! Brady is not only a phenomenal improviser, but a force of nature when it comes to rallying and inspiring people. It has been awesome working with him and my other co-directors, David Aintablian and Maddy Triggs.

Prior to Improv Broadway, what had you been working on in the community?

While working on my JD/MPA, I did PR work for the City of Provo and mediated in small claims court.

How did the idea come about to start your own comedic theater? 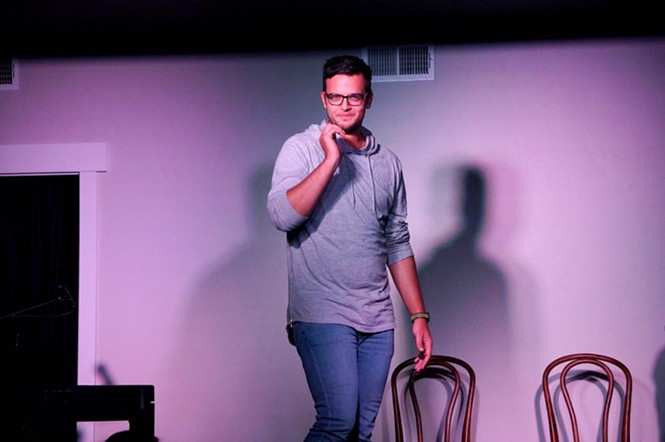 What made you decide to keep it in Provo? How did you come across the location on 900 East?

Provo is on the cusp of becoming something incredible. We're a fast-growing city in population, the tech industry, film, music and entertainment. ImprovBroadway's mission is to create the world's first All-Ages Appropriate comedy hub. We want to produce the next Tina Fey, Amy Poehler, Steve Carrell and Will Ferrell, but with a background specifically in family-friendly comedy. And where else to create a clean comedy community than in the city with the highest concentration of talented people with G-rated values? We chose the 900 East location because it is down the street from BYU, a short walk away from thousands of apartments, and it's in a strip [mall] with lots of parking. We wanted to be easily accessible to everyone, which is a challenge for other business areas in Provo like the downtown area.

What was it like converting the space into what you needed, both for performing and for workshops?

It was a bit of a nightmare. I had heard of "fixer-uppers" before, but this one took the cake. We had to gut the entire space and rebuild it from the ground up. It's more machine now than man. But it was worth the time and expense to get the prime location.

What was the grand opening like for you and the group?

It was absolutely incredible. I was blown away to see friends, family, fans and strangers pack shoulder-to-shoulder in our theater to see four grown-ups play make-believe.

What kind of classes do you teach, and what kind of theater skills do people get to learn?

For now, we teach improv classes—focusing on the Chicago-style of long form improvisation, known as The Harold. As we grow, we will expand our curriculum to sketch comedy, , musical improv and anything under the comedy sun people want to learn. I attribute all of my professional success to what I've learned from improv. Students will learn how to listen on stage, find the funny in situations, make their scene partners look good and, most of all, how to fail and love it.

Aside from the improv shows, what other shows are you currently exhibiting?

It is just improv for now, but our goal is to produce all types of independent and family-friendly comedy six days a week.

Are you planning on expanding the performances anytime soon, or including standup comedy?

Absolutely! The faster we get our school and shows filled, the faster the community will see all types of comedy on our stage!

For those who wish to get involved or take classes, what do they need to do?

People can register for improv classes at ImprovBroadway.com.

What can we expect from you and Improv Broadway going into 2017?

A bit of tomfoolery and a whole lot funny.