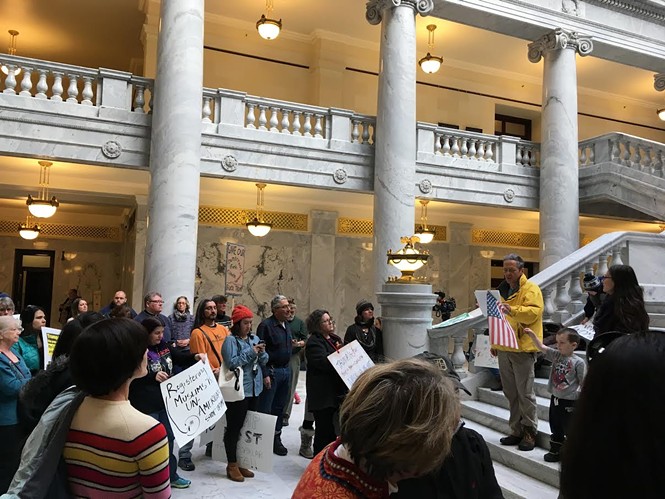 
That’s because moments before, Lt. Gov. Spencer Cox declared the news that Utah’s six electors had unanimously cast their presidential votes for Donald Trump, setting off a sustained cacophony of boos.


Although the presidential candidates appear on one ticket with candidates for vice president, they are separate votes in the Electoral College, which officially convened Monday, more than a month after the General Election.


In Utah, the six electors were at a curved dais in room 445 at the capitol building with Cox and other officials, sitting opposite a gaggle of protesters carrying homemade signs. A line of media people banked the north wall. And there in the thick of the fracas sat a classroom of Hawthorne Elementary School third-grade students.


The rules in Utah force the hand of electors, who are there to more or less rubber stamp the will of the state’s popular vote. Had any deviated, they would have been booted from the post and immediately replaced.


Protesters, however, looked to a Colorado lawsuit that might set presidential-voting precedent. Politico reports that a panel of judges “suggested” last Friday that state officials can’t replace electors once the voting has begun.


“State’s who’ve required the electors to vote as their state did, that’s overruled by the Constitution,” said Sarah Buck at a protest gathering before the vote near the Capitol rotunda. “Because that’s a state law and the Electoral is governed by federal law.”


Those at the demonstration said the government needed to investigate rumors of Russian influence before legitimizing the election. And Trump’s controversial cabinet picks and racist and misogynistic comments were grounds for opposition, argued protester Stephen Trimble


“Our job is to stand up all the time and say, ‘We can’t normalize this behavior,’” he said.


Utah’s electors made no waves, though, voting as expected. In turn, the protesters’ response went as expected.


Cox tried to control the room, at times, by appealing to the protesters. “I hope you know that this matters. What they’re doing matters,” he said, signaling to the electors flanking him. Then pointing out to the crowd he added. “What you’re doing matters.”


The meeting concluded, though, to a jumble of fiery chants.


Chants ranged from the classics (“The whole world is watching!”) to the Trump specific (“Investigation before inauguration!”) The protesters also directed their disappointment at the electors. (“Shame on you!”)


Cox noted that the event would likely be a memorable one for the elementary students.


At least one Utahn walked away from the Capitol satisfied. Flashing a “Make America Great Again” sign, T.J. Smith showed up at to support the president-elect and hear what the other side had to say without interjecting his own thoughts.


“This isn’t my event so I need to be respectful of the speakers, and not try to shout them down or boo,” he said, about the organized protest. “I respect their opinions in that I’m not going to interfere with them sharing it.”


Copies of the ballots will be sent to the federal government’s executive branch, both houses of Congress and the National Archives. The state keeps copies as well, Cox said.