A chat with the SLC comedian about his career.

We're finally into 2017, and I don't know how you personally feel, but I need some comedy and fast. This month we're focusing on Joe Everard, a local comedian who has been coming up through the ranks to the point of hosting shows and being a notable figure in the local indie circuit. We chat with him about his career and thoughts on local comedy. (All pictures provided courtesy of Everard.)

Gavin: Hey Joe, first thing, tell us a little bit about yourself.

Joe: I've been a writer since I was a little kid, but whether it was before or after the alien abduction, I can't recall. I enjoy sushi as well as short walks on the beach, because who enjoys sand in their shoes? I enjoy mustard, loathe ketchup and find fry sauce confusing. I've been doing stand-up for about two years now.

What first got you interested in comedy and who were your biggest influences?

My buddy introduced me to [George] Carlin when I was 17 on a road trip. Blew my mind. Also, Dennis Miller, [Mitch] Hedberg, Burr, Stanhope, many others. Primarily people who tend to infuse their comedy with philosophical leanings. I'm all for silly and dirty jokes (I have plenty) but it seems a waste to not inject some deeper meaning if it fits.

What made you decide to attempt stand-up comedy?

Masochism? A deep-seated need to have a large number of people stare in blank-eyed silence? Maybe it was just a desire to avoid paying cover at Wiseguys for Open Mic. I started writing a couple of years before I tried it. Even the idea of potentially failing kept me away.

What was it like putting together your first sets and breaking into shows?

Tough. I recall writing out verbatim my entire first three-minute set a month before I actually went up. If I've ever talked in my sleep, it was repeating that material.

What were some of the biggest lessons you learned about performing when you first started?

Learning to control anxiety and channel it is a big deal. Some people look and sound natural the first time they get on stage. That was not me. I still struggle with it, but to a much lesser degree. Also, when I realized it wasn't what I found amusing that would necessarily get people on board. It's a process to tune a sense of what I think will work, but still be fun for me to say.

What's your process like coming up with new material and figuring out what to use?

It's really looking or listening to stuff and reacting to it, finding a strong emotional reaction and then trying to build a twist into it. Sometimes a joke will arrive fully formed, which is nice. Usually, though, a bit will start as an idea, and I'll need to let it marinate to find the right angle. Sometimes that's or even years. Then there's testing it in front of a crowd and tuning it so it works consistently.

How is it for you working with other local comedians and being a part of this circuit?

There are a bunch of tight, supportive groups in the scene. Promoting, writing, a Grand Slam at Denny's at 2 in the morning? They're there.

What's your experience been like working more of the indie rooms in SLC and playing to some non-comedy crowds?

The experience is more varied. If people go to a comedy club, they're focused on that idea. Non-traditional comedy rooms draw different folks. It leads to a more diverse cross-section of the population. I enjoy that.

What's your take on the Utah standup scene and the people coming out of it?

SLC has some great comics. I think because people have to fight for stage time in the valley, that forces people to get better. Just because of SLC's history and culture, I think that we exist in a bit of a bubble which gives a distinctive viewpoints. 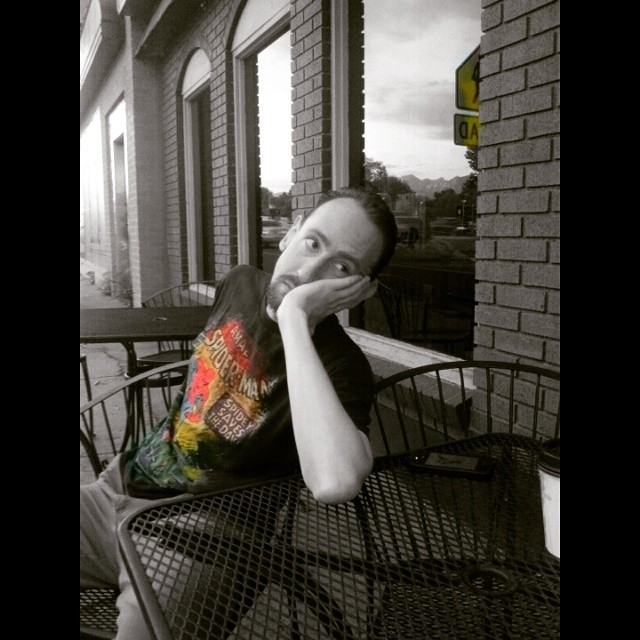 What's your opinion of national stand-up comedians coming through town, and what impact do you believe that has on the local scene?

When out-of-towners roll through, there's an energy in the air, such that it'll keep me from wearing wool socks. Being able to get perspective from someone who's been doing stand-up for decades or longer is a great thing. Folks in town, myself included, do what we can to make their visits worthwhile.

What advice do you have for people looking to getting into stand-up comedy?

Remember to wear shorts, sunglasses and sandals on stage. That's how you win hearts and minds. Also, Christopher Walken impressions go a long way. Go up as much as you can. Write as much as you can, and do it with other comics. Don't be afraid to fail, because you will.