If state audit recommendations bear out, former Unified Fire Authority Chief Michael Jensen and his former right-hand deputy Gaylord Scott could be on the hook for hundreds of thousands of dollars and face a slew of charges.

The two found themselves at the center of a City Weekly investigation last summer that resulted in both men resigning from their powerful posts. What started as a probe into lavish bonuses reaped by four officials—UFA chief, deputy chief, attorney and CFO—eventually uncovered wayward spending by the department’s top brass.


In scathing detail, the audit shines light on example after example of impropriety on the part of Jensen and Scott. Allegations range from extended personal travel on the taxpayers’ dime to suspect hiring practices, and from questionable “incentive pay” bonuses to unapproved use of electronic devices.


The audit also lists a string of recommendations, including the UFA board ask for all money back forwarding all apparent violations of Utah law to law enforcement.


Eagle Mountain Mayor Chris Pengra is vice chair of the UFA board. He expects the board will likely discuss the findings, including legal options, in an upcoming meeting.


“The auditor has made recommendations,” he says. “In response to those recommendations, as a matter of being responsive to public trust. We feel like it’s necessary to give each seriously and discuss them as a board.”


In broad categories, the audit determined that the chief put his own interests ahead of the organization, the board failed in oversight and the UFA “experienced operational weaknesses.”


The document, 68 pages long, touches on each of these assessments. 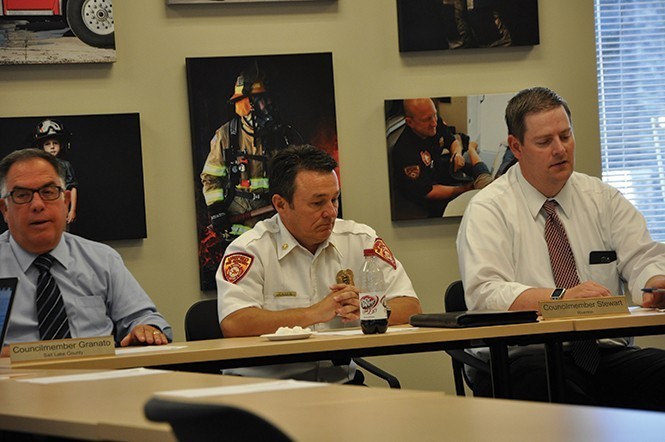 According to the audit, Jensen and Scott made on top of their full-time salaries, an additional $103,000 and $105,000, respectively, in bonus incentive pay. It’s less clear, however, why the extra tasks they were asked to complete didn’t fall within the purview of chief and deputy chief.


With Jensen’s approval, former UFA CFO Karl Hendrickson received about $79,000 in additional incentive pay between 2012 and 2016, and former UFA CLO took home about $83,000 in incentive bonuses. Those two also received tens of thousands in clothing and vehicle allowance, despite not needing firefighting uniforms and having limited travel requirements.

When hiring, the chief gave preferential treatment to his son and son-in-law over candidates with more experiences.


Then he allowed his son and son-in-law to attend a condensed EMT course as the only two members in order to be eligible for hire. They began their employment during an irregular mid-pay period interval, and days before July 1, 2011, a deadline necessary to ensure they qualified for a more lucrative retirement benefit.


In total, Jensen directly supervised two sons, two brothers-in-law, and a cousin. The deputy chief supervised three of his nephews.

On March 6, 2013, the chief and his deputy toured fire stations in Phoenix. “A day trip, resulting in no hotel stays, would have been reasonable given the business itinerary,” the audit states. Instead, the two stayed in Arizona for five days, four of which were blocked as “personal days.” On two of those days, the itinerary obtained in the audit indicates they were to attend baseball spring training.


Auditors calculated the cost to taxpayers for legitimate business in Phoenix to be about $360 each, including airfare based on average flight costs. But the officers racked up “$2,930 of unnecessary costs” totaling $3,650 between the two of them.


In a similar case, the chief and deputy took a trip with their families to Anaheim, Calif., for the purported purpose of visiting firehouses. But the fire stations contacted by auditors in that area had no documentation or recollection of a tour given to Utah fire personnel.


In yet another, the chief while on a conference trip allegedly rented a car and drove more than 750 miles “despite the conference being held within walking distance of the hotel with convenient ground transportation available to/from the airport as a much cheaper option.” Taxpayers reimbursed that unnecessary rental for $666. The audit found that between 2011 and 2016, the deputy spent more than $5,100 for eight different rental car payments, almost always opting for the full-size vehicle to economy options. Furthermore, in seven of the eight trips, the hotels were in walking distance to the conference center.


In one case, a taxi expense was charged when the official had rented a car.


The deputy chief traveled more than 30,000 miles each year on a UFA-issued vehicle.


Perhaps unsurprisingly then, the chief and deputy failed to follow expense reports. In one case, the Jensen recorded travel expenses 18 months after he returned, according to the report. In another, he authorized his own reimbursement. Similarly, the former deputy chief authorized a few of his own expenses, and failed to get preauthorization for a few trips prior to leaving.


The chief also appears to have amended the travel policy to bend to his actions. An earlier policy expected officers to pay a “reasonable fare” when booking flights. Jensen changed the policy to allow booking nonstop flights even if it’s more expensive.

When the chief and deputy chief resigned, they handed over a stash of electronics, including four iMacs, two MacBook Pros, five iPad variations, three Nikon cameras, seven lenses, two stainless steel Apple Watches, a GoPro camera, a Canon video camera, and two iPhones—“one of which was appeared to have been never used,” the report states.


Auditors determined the officials needed computer equipment for basic email, spreadsheet and word processing needs. UFA’s policy prohibits specific uses of electronic devices. Among the violations, one of the chief’s computers contained files related to a family business, some contained files soliciting campaign contributions, and one of the chief deputy’s computers hid thousands of pornographic pictures.

The audit also notes questionable decisions by board members and a carelessness for procedural oversight.


Scott filed expenses that claimed he and unnamed board members stayed at a Salt Lake City hotel on April 21, 2013, despite the “close proximity to these individuals’ homes.”


The chief paid for the meals of unnamed board members. The audit recommends the resignation of any board member who excused “improper behavior,” or any who cannot commit to adequate oversight. The frequency of meals top officials charged on their cards may qualify as a taxable fringe benefit, the audit states.


Jensen at the time and still to this day sits on the Salt Lake County Council. Auditors determined that this position of power influenced UFA board members. When the chief and deputy resigned, they were given severance packages of $92,000 and $42,000, respectively.

“With suspicions of improper activity, and given the information available to the Board at that time, we question why the board did not proceed for termination with cause,” auditors wrote.


Another assistant chief, who filed more than $3,100 in questionable travel expenses and more than $5,300 in electronic expenses refused to cooperate with auditors and hired an attorney. The audit also recommends he be fired.


Five assistant chiefs made more than $18,000 in questionable charges that included rental cars, airfare and a three-night hotel stay in St. George. Two battalion chiefs spent more than $3,700 on lodging in Sandy and airfare.


Pengra says most of the cited instances in the audit involved former board members.


The UFA board officially responded to the audit in a memo acknowledging “misplaced trust” in the chief and his deputy chief.

You can read the report in its entirety below.


“We are deeply troubled and disappointed with not only the volume of findings, but also the specific actions and behaviors of the executive leadership as detailed within this report,” it states.


The UFA board committed to confer with its lawyers the possibility of forwarding on allegations to law enforcement. The body will also discuss strategies to recoup money from the chief and deputy chief, and change policy and practices to allow for more oversight.


“We’ve implemented many changes to policy and procedures since these things started to come to light. We will continue that work there is more work to be done,” Pengra says. CW