The directors and actors chat with us before opening on April 12.

For their final 2017 production before the annual Saturday's Voyeur , Salt Lake Acting Company presents Hand To God from April 12 - May 14. The Robert Askins play focuses on  members of a puppet club at a Christian church, where kids use the puppets to learn about the Bible and avoid Satan. Things start to go awry when a couple of the puppets become attracted to each other, and one professes that he is Satan himself. Before the play opens, we chat with director Chris and actors Riley O'Toole and Amy Ware about the play and their thoughts going into opening night. (All pictures provided courtesy of SLAC.)

First thing, tell us a little bit about yourselves.

Riley: I'm originally from Sacramento. I graduated from the University of Minnesota/Guthrie Theater BFA actor training program in 2015. I'm not currently "based" anywhere—I've been lucky to follow some different acting opportunities around the country for the past two years.

Chris: I’m the head of the actor training program at the University of Utah, and a professional actor, fight director and director with experiences working across the country.

Amy: Hello there, I am a 23-year-old actress from Salt Lake City. Besides trying to live the dream as an actress, I also work at Salt Lake Acting Company as part of their Marketing and Audience Development Team.

What had each of you been doing in theater over the previous year?

Amy: I was in Bus Stop at Centerpoint Legacy Theatre as Cherie and Picnic at The Grand Theatre as Millie.

Riley: In the past year I've worked in theaters in Wisconsin, Arizona, Montana and most recently a stint in Minneapolis, where I played John in The Lion in Winter at the Guthrie Theater, followed by the role of Caleb in The Whipping Man with the Minnesota Jewish Theater Company.

Chris, how did you first come across Hand To God? What did you think of the show at that time?

Chris: I first talked to Cynthia [Fleming] about it last year, and when I read the script, I instantly fell in love with the boldness of the piece as well as with how much it moved me.

How did you end up coming on board with SLAC to direct the show?

Chris: Cynthia and talked at length about it, how I would direct it and how I felt it revealed important and resonant truths about what it means to be a human being. When she asked me to direct, I jumped at the chance to work with this beautiful play with what I think is one of our nation’s most remarkable s producing important work.

What kind of approaches have you taken as the director to adapt the show and kinda make it your own?

Chris: For me, it’s all about collaboration. Bringing in remarkable collaborators to work with is a significant part of the puzzle for me. The entire team on this project is truly remarkable—and across the board, the collaborations have been fruitful and deeply informative.

Riley and Amy, what were your first impressions of Hand To God?

Riley: It's the only play I've ever read on my phone—I was on a long drive (I wasn't driving) and I had a copy of it in an email. I opened it figuring I would just check out the first scene, but then I couldn't stop reading. Around an hour later, I had a headache from reading the small text on my phone, but I had to finish it. It was one of the funniest, fastest-moving plays I'd ever read, and I immediately began imagining how the Jason/Tyrone role could be played.

Amy: Outrageous, hilarious and real. I first read the script before auditioning, and I remember thinking I need to audition for this, I need this crazy poignant play in my life.

How was it for you to audition and become involved with the show?

Amy: Like all auditions, I was equal parts terrified and excited, but auditioning for Chris was just a dream. When Cynthia told me I had been cast as Jessica, I was over the moon with excitement to be a part of such stellar cast, and to be in a play that is so physical and emotionally raw.

Riley: I had worked with Chris, and he asked me to submit a video audition to SLAC for consideration. At the time I was on tour in Montana, so I raided a thrift store and made a little sock puppet and submitted a video of myself playing a couple scenes from the play. I named the puppet Phillip for Phillipsburg, Mt.—the town in which he was born.

What was the process like for each of you to find these characters?

Riley: It wasn't very long ago that I was an awkward 15-year-old myself. And although I didn't have a puppet like Jason does, I did have those chaotic inner voices—we all do, I believe, especially at that age. Add in the fact that the kid has just lost his dad—I think anyone can empathize with Jason's struggle, even if they've never worn a puppet.

Amy: Truthfully, for playing this role, all I really need to do was remember my 14-year-old self. I just remembered what is was like to be head over heels for a boy. The awkwardness and uncertainty of it all. How all you wanted to do was kiss him, but you couldn't even get up enough courage to say more than four words to them, and most of the time those four words made no sense.

How has it been interacting with each other and bringing this show to life?

Amy: It has been a grand old time! Riley is wonderful to work with, we can never seem to keep a straight face during our scenes, but truly the entire cast is wonderful! I feel extremely fortunate to be able to play with all of them on stage.

Riley: We have had a ton of fun in the rehearsal room. It has been a blessing to collaborate with such a generous and kind-hearted group of artists. 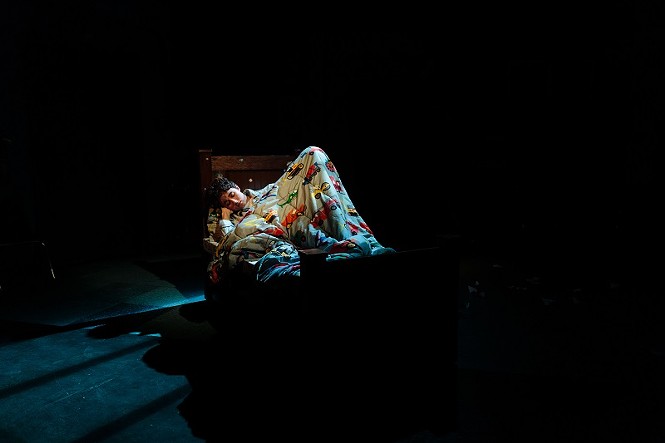 What do you each hope people will take away from this particular play?

Riley: My primary hope is that people have a joy-filled evening in the theater. I hope they have as much fun watching this play as we've had to work on it.

Amy: I hope that people, of course, come away having had a wonderful time. But I also hope that they see the humanity that shines through the script.

Amy: Extremely excited and ready to show an audience this big rowdy play that celebrates what it means to be human!

Riley: I'm excited to share this play with SLAC audiences.

What can we expect from all of you over the rest of the year?

Riley: After this, I'm heading back to Montana for another summer of touring with Shakespeare in the Parks. We'll be playing Macbeth and Shaw's You Never Can Tell to audiences in 60 communities.

Amy: At the current moment I am a free woman! I have nothing on my plate but work and upcoming auditions.

Chris: Will be continuing to fight direct, act, direct and guest teach wherever and whenever I am fortunate to have the opportunity. Next up, I’ll be directing Taming of the Shrew at the Colorado Shakespeare Festival, Up at the University of Utah, and fight directing several productions at Pioneer Theatre Company.