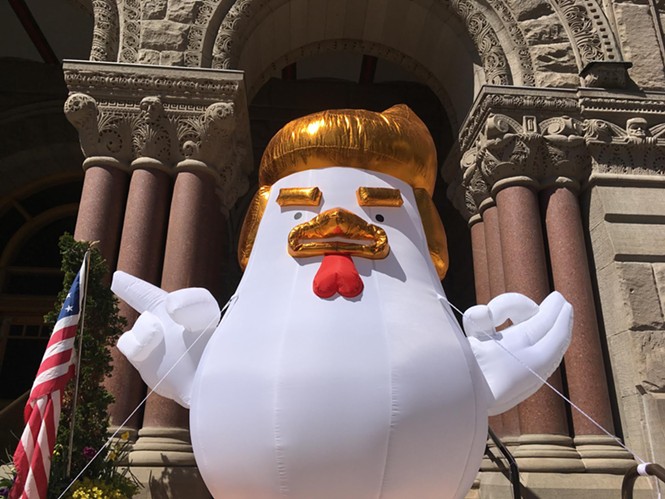 As is custom, candidates vying for the highest office in the land reveal their tax returns as a part of the modern vetting process Americans have come to expect.


But President Donald Trump has proven time and again that he isn’t one for propriety.


Under the premise that he was waiting for the completion of an IRS audit, Trump the candidate deferred releasing his taxes, and then became Trump the president. Now in office, his administration has responded to the topic by repeatedly asking, Who the hell cares about the president’s taxes?


The answer came on Saturday, bigly, in the form of thousands of protesters from Washington, D.C., to Seattle and major cities in between. In downtown Salt Lake City, an estimated 1,000 joined the ranks outside the City and County Building.


“Our focus and our request is singular. We want Donald Trump to release his taxes, and until he does, every decision he makes will be suspect because we’ll be wondering whether he’s doing in America’s best interest or to line his own pockets,” Stacy Hughes, event coordinator for Utah Trump Tax March, told City Weekly.

Secondarily, organizers are pushing for support of a state law nicknamed the Trump Act that would mandate “any candidate who wants to appear on the ballot in the state of Utah to release the last five years of tax returns going forward,” Hughes said.


Before the mass embarked on a so-called 1040 step march down 200 East and past an IRS building on 50 South, speakers pumped up the protesters. Next to the microphone loomed a giant inflatable chicken with coiffed orange hair in Trump’s likeness.


Alliance for a Better Utah board member Jonathan Ruga outlined why the the public should care about Trump’s failure to disclose tax information.


Democratic challengers to Rep. Jason Chaffetz, R-Utah, and Mia Love, R-Utah, also stumped prior to the march. Although only Democratic candidates spoke at the rally, Hughes maintains that financial transparency is bipartisan.


Worth noting, the American public isn’t in total darkness when it comes to Trump’s taxes.


Last month, MSNBC personality Rachel Maddow broadcast a two-page leaked return that showed in 2005 Trump paid $38 million of his reported $150 million income that year. More than a decade old, the document hasn’t quelled the demand that he formally release a recent return, though. Some even speculate that the Trump camp might be the source of the leak, though there is no evidence to support that claim.


And The New York Times obtained a portion of a tax document which indicated Trump claimed a massive loss in 1995 that analysts say would have granted him an 18 year pass on paying federal taxes.


“When we all turn in our taxes on Tuesday, we want to know that the president is paying his fair share,” Hughes said.


In a presidential debate last September, Democratic candidate Hillary Clinton tried to tee up this point. She began asking why a rich businessman like Trump should have a lower tax burden than your average Joe.


Breaking from debate decorum, Trump interrupted his opponent’s point with a classic Trump-style schoolyard retort: “That makes me smart,” he said. It’s you taxpaying plebs, he seemed to imply, who are not.