Owner of SLC tattoo shop talks about the unique work they're doing for women.

Many people may not be aware, but Salt Lake City is home to a unique tattoo program handled by one specific shop: Fallen Angel Tattoos. The all-women tattoo shop has been lending its talents to helping other women who have gone through breast cancer and required reconstructive surgery, by creating beautiful art on their bodies to cover up scars. Today we chat with the owner of the shop, Francis, about her career and starting up the shop, as well as the work they've been doing. (All pictures provided courtesy of Fallen Angel Tattoo.)

Gavin: First off, tell us a little bit about yourself.

: I am a mother of two. I love camping, boating, hiking and animals. I have a very big heart, which plays into every aspect of my life. Before going into the tattoo industry I was an optician and a realtor for many years.

How did you first take an interest in tattooing, both for yourself and as an art form?

I got my first tattoo when I was 25, and thought it would be an amazing way to make a living. I have been an artist my entire life, even winning the KSL Christmas Card Contest when I was 9. I thought it would be so cool to be able to make a living with something I thought was just a hobby, not something that could actually pay my bills. Tattoos were not very mainstream at this time, so I didn't think it would work with my family life. A few years later, I went to get the tattoo touched and had the same thought of how I would love to do that for a living. I had since had skin and realized life can be short. Take control of your life and take it where you want it to go. 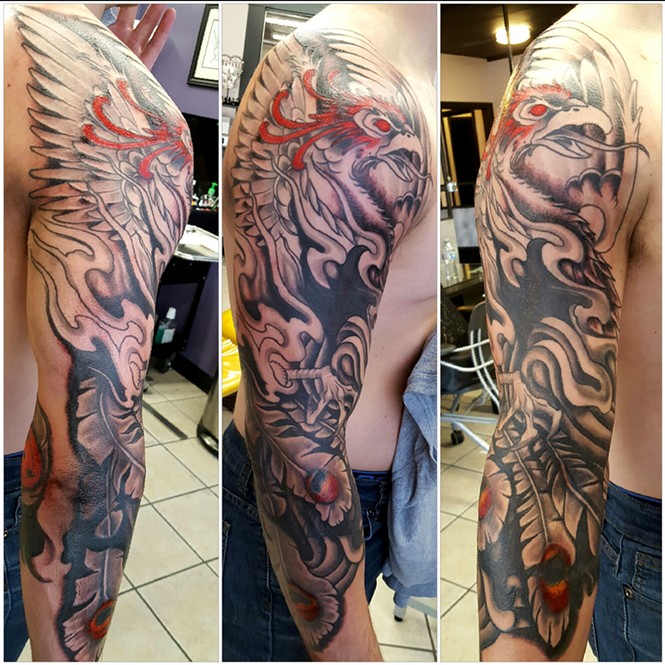 What made you decide to get into it as an artist? How was it for you starting out?

I asked the artist how I would go about becoming a tattoo artist. A few days later, I took my art in to show that shop owner, and he hired me as an apprentice. I apprenticed in that studio for several months under some great artists and learned a lot about tattooing. When the shop owner realized I was married to a cop, he politely let me go. I can only speculate whether it was the fact I wasn't single or the fact that my husband was a cop that was the problem. (Ironically, I got divorced a couple of years later.) I changed shop,s and there learned many other techniques and a lot tattoo machines. I was ready to begin tattooing, but the shop owner had another apprentice that was there before me who was not ready, and he said it would not be fair to start me tattooing before her, even though he agreed I was ready. I went to a third shop explained my situation; that shop owner instructed one of his artists to take me under his wing and get me tattooing immediately. He did this and I was tattooing a few weeks later. After being there a while, things started getting weird at that shop. I had a bad feeling about things, and I had a feeling there was a drug problem in the studio even though nobody was doing it around me. Again, I decided to change shops. The shop I left ended up going out of business soon after. I am not sure just the rumors I heard involving a robbery and a police shooting which made me thankful I had listened to my gut and got out when I did. I worked in one more shop for a while, but then decided it was not up to my standards. Drugs and drama were an ongoing problem in every shop I had worked in, so I tattooed out of my house for a little bit before deciding to open my own studio.

Prior to Fallen Angel, what other good shops had you worked at over the years?

I don't want to mention my previous because they were more negative than positive experiences and I try not to speak badly about other shops. I learned from good artists. I feel my training was good, but the way women are treated in the industry, especially when they are trying to get started, is not good. Because of this, when I created my shop, it became a safe haven for some amazing female artists who just wanted a positive environment to be creative and do what we do best.

What made you decide to start up your own shop rather than just be an artist at someone else's place?

As tattoos became more mainstream, I felt like there was a need for a more professional tattoo studio. I wanted to create an environment that was fun, less intimidating and free of drugs. A place where the general public would be comfortable. I found most clients are more comfortable with a female artist. I guess it was a case of, if you want something done right, do it yourself. So I did

How did you come across the spot on State Street? And what made you decide to call it Fallen Angel?

It took some searching, but I felt it was a good spot for new clients to find us. Why the Fallen Angel name? I have saved a few people's lives during my life, and have been told several times I am an angel here on earth. Logically, if an angel is on earth, it must have fallen, right? The idea of a fallen angel seemed to fit the situation of me following my heart and doing things the way I thought I should, not doing what the industry or society thought I should.

What was the process like in finding the artists you wanted to work with and bringing people on board?

It has taken some time but I have slowly gathered up an amazing staff of beautiful artists who are amazingly talented. The talent was the top priority but personality was very important too, I do not tolerate drama, so finding talented female tattoo artists that don't create drama took time. The girls and I all get along so well and have become great friends. It has turned out better than I ever imagined it could. Mellow, no drama, just a shop full of silly girls having fun and creating beautiful art. Shannon has been with me the longest, joined us soon after, I found Astar about six months ago and Savannah is our apprentice. The girls all were experienced tattoo artists that have had bad experiences in other shops, so they really appreciate the environment at Fallen Angel Tattoos. I love watching the girl's art talent blossom and grow being in a positive environment. I see the new art they create and feel very proud and lucky to have them in my studio.

One of the big things your shop does is help women who have reconstructive surgery on their chest by giving them 3D nipples and other art. How did you start that program up?

A few years ago, I read about a few tattoo artist across the country doing tattoos on breast cancer survivors to cover their scars and give them new nipples after reconstruction. One of my aunts had died of breast cancer a few years before, so this hit close to home. I wanted to help these brave women that have survived their difficult battle. I did some research and began doing tattoos to cover the lumpy radiated tissue and scars, and started tattooing nipples on oranges until I had the 3D effect perfect. Since my shop was all female artists, I decided to keep it that way to make it a comfortable place for these women that have been through so much. I have found this tattooing to be some of the most rewarding of everything I do. I make these women feel beautiful again! Happy tears at the end of these sessions happen often. There are very few jobs that you can make someone so happy they cry tears of joy. I am very lucky to get to experience this on a regular basis. I never knew tattooing would be so rewarding. Unfortunately, many women do not know that this service is available here in Utah, so they are flying out of state for this. I am trying to get the word out to these women that there are several options to help them feel good about their new body, and I offer all of the tattooing options.

That kind of service has to be rare in the states. What kind of response have you been getting?

My studio now has five artists, so we have outgrown our current location. We have liked our current location, so we are moving just two doors south inside the same building into the largest retail space it has. I want to show my girls and clients how much I appreciate them all so I am doing a full remodel on the new space. It is going to be beautiful! We should be moving into the new space sometime around the first week of June. We will be doing an open house grand reopening July 7 & 8 from 11 a.m. until 7 p.m. both days for everyone to come check out the new studio. There will be refreshments, special and giveaways. Details will be on Facebook and our website for the grand reopening at 1530 S. State Street in Salt Lake City. This will not affect business between now and since I am keeping the current location open until the new space is completely ready.