"That's the last rock to look under" | Buzz Blog

"That's the last rock to look under"

Questions linger over investigation into prosecutor who committed suicide. 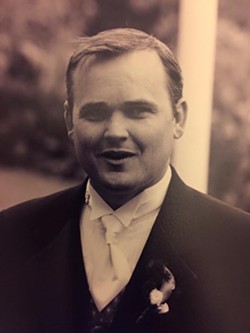 Can answers to the many questions swirling around the suicide of a former high-flying prosecutor be finally close to hand?

It's just past the one year anniversary of the death of much-loved veteran Salt Lake County prosecutor Chad Platt in the early hours of Monday May 9, 2016. He jumped off a downtown parking structure near his employer, the District Attorney's office.

ICAC's attention turned to Platt's missing work iPad that belonged to Salt Lake County. Relatives say they found the iPad under the seat of Platt's car after it was delivered to his sister. The Utah AG's spokesman Dan Burton declined to comment.

The iPad was then turned over to the FBI-affiliated regional computer forensics lab, to wait in a queue to be looked at.

At the beginning of May, Platt's iPad got to the front of that line and the  FBI's investigation of its hard-drive began.

"One year later, we think they're just stalling for time," says Shawn Platt, Chad's brother, about the family's frustration over how long the investigation has taken. They still seek to clear his name and believe the feds will come up empty.  With the iPad now at the heart of the investigation, "That's the last rock to look under," he says.

Chad Platt is buried in Tuscon, Ariz. On the night of the anniversary, the family went out to the cemetery.

As they gathered to remembered their loved one, the questions that continue to linger over this case could not have been far from their minds. Was the search warrant flawed, or "weak" as the family claim they have been told  by law enforcement sources?

A family representative writes in an email, "Ultimately we have come to see the AG's office as having the responsibility of executing a flawed warrant and then keeping the fact that they did not find evidence from the public."

Why did the AG find nothing at Platt's home? Had his time learning about computer forensics at work meant he had covered his tracks sufficiently to outfox such a raid?  Or was his unusually calm demeanor as ICAC searched his home because he knew he had done nothing wrong?

If he did nothing wrong and the AG warrant was accurate, had somebody tried to set him up?
Why did the AG release him? If they found nothing at his home, then they had no legal reason to detain him. Yet, for someone of his community standing, someone who knew full well the implications of such allegations, and particularly the months, years of struggle and the fate he awaited in prison if convicted, every person at that search and at the D.A's office was intimately aware of the weight on his shoulders when ICAC packed up and left.

Now it's down to that final countdown. The AG's chief criminal deputy Spencer Austin wrote the family in an email dated May 1, "Once we hear from [the FBI] and ascertain what is contained on the hard drive, I will contact you."

Until then, those who were the friends, colleagues and loved ones in Chad Platt's life remain in the dark.