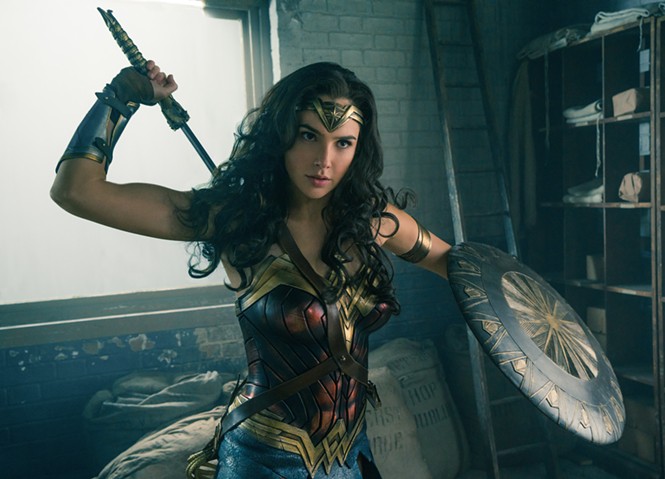 In a multiplex world where the Marvel Cinematic Universe keeps churning out well-liked blockbusters, rival comic-book publisher DC has a big-screen problem. It's not so much a financial problem; recent efforts like Man of Steel, Batman v. Superman: Dawn of Justice and Suicide Squad all managed big box-office numbers. But aside from the super-fans, people don't seem to care for these grim tales very much.  As DC's parent company Warner Bros. tries to build its own connected cinematic universe out of celebrated characters like Batman and Superman, it's still trying to learn lessons from Marvel. How do you make comic-book movies that aren't just popular, but are also, you know, good?

As it turns out, DC didn't have to learn its lessons from Marvel movies; it only had to turn to its own television universe. Wonder Woman finds an appeal that its darker predecessors lacked, simply by learning the lessons of TV's The Flash and Supergirl. It's amazing how much more satisfying a heroic story can be when it's about actual heroes.

Following a prologue linking this narrative to Wonder Woman's appearance in Dawn of Justice, the story flashes back to 1918, and the all-women hidden island of the Amazon warriors. This is the home of the princess Diana (Gal Gadot), who sees a human man for the first time when American spy Capt. Steve Trevor (Chris Pine) crash-lands in the ocean off the island's shore. Diana rescues Trevor, then insists upon joining him in his return to the world to fulfill a mission passed down among the Amazons: being prepared to fight Ares, the god of war, for the very soul of the human race. And with the world itself at war in 1918, that's a big mission to undertake.

As you might be able to tell, Wonder Woman does take some cues from at least one Marvel movie—Captain America: The First Avenger—by setting its origin story in the past, with our protagonist fighting Germans bent on world conquest; Diana and Trevor are even accompanied by a rag-tag team of Howling Commandos-esque helpers. Director Patty Jenkins finds a unique rhythm not just through a setting that's the 1st rather than 2nd World War, but by delivering some fun fish-out-of-water moments for Diana: trying on circa-1918 English women's fashions, or experiencing ice cream (or a glimpse of male genitalia) for the first time.  The set-up might feel familiar, but the particulars provide their own charms.

More significantly, Wonder Woman actually seems interested in applying a corny throwback sensibility to its storytelling. Diana's character is defined first and foremost through her sense of purpose, an unwavering commitment to the idea that humanity needs to be saved from the warlike impulses fomented by Ares. This isn't a character built on angst, but on idealism, unironically celebrating super-heroism as principled self-sacrifice. This is the sensibility that the DC TV universe has curried so effectively, offering something that feels precious and rare in a cynical era. Gadot may not be an actor with tremendous range—the jury is still out—but she sells Diana's morally-pure determination with energy and charisma. Also, considering the overall dourness of many of the DC comics-based movies to date, it's no small thing that this idea is delivered with a generous dose of humor.

This is, of course, still a summer comic-book blockbuster, and it seems impossible to avoid some of the now-familiar drawbacks of the genre. While Jenkins gives some of the earlier action sequences a burst of ooh-aah creativity as Amazons spin and twirl their way through firing off arrows, the "pause for slow-mo" style feels forced, and an awkward fit with the electric-guitar-based underscore. Then there's the grand climactic battle, which has plenty of stuff blowing up real good, but distracts from the focus on a crucial plot moment. Yet it's ultimately hard to resist the way that Wonder Woman takes seriously the job of creating a role model; it feels like a great bit of self-awareness when Diana is shown as a child mimicking the fighting moves of her Amazon elders. These mythic characters are often about guiding us to our best selves, recognizing our own capacity to make it harder for evil to triumph. We've been able to see those characters on the small screen; it's nice to see that notion make a big-screen leap.