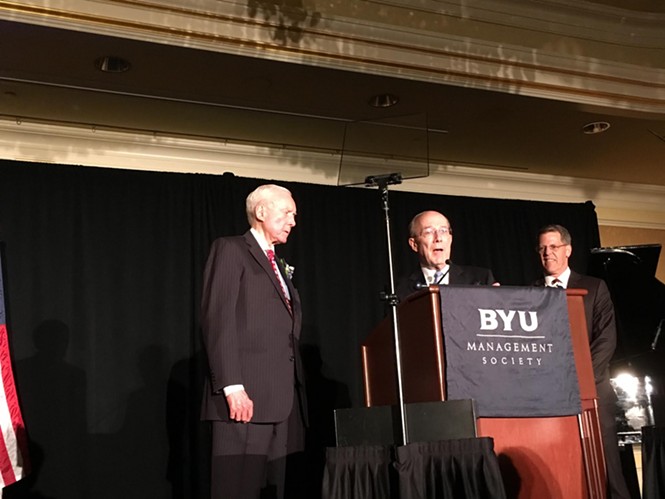 
The event, a scholarship fundraiser, highlighted Hatch’s lengthy tenure, his faith in the Church of Jesus Christ of Latter-day Saints and his musical talents.


It was a scholarship offer, Hatch said, that enticed him to attend BYU.


Hatch grew up in small frame house outside Pittsburgh, Pa. As a youth, he was drawn to boxing and basketball. He also won a school mock presidential election. In 1954, Hatch served a two-year LDS mission in the Great Lakes region, which he considers “the most important experience” of his life.


Afterward, he attended BYU and met his wife Elaine during his sophomore year. They’ve been married for almost 60 years.


In 1976, Hatch was elected to represent Utah in the U.S. Senate, which makes him the longest-serving senator in American history. During this time, he’s sponsored more than 760 bills that have become law. A video montage showed clips of Republicans and Democrats calling Hatch a friend.


Hatch’s political longevity has led to consternation for some, however, who point out Hatch’s hypocrisy in an infamous quote he gave when he first ran against incumbent Frank Moss in ‘76: “What do you call a senator who’s been in office for 18 years? You call him home.”


Hatch has now eclipsed the length of Moss’ tenure more than two times over.


And while it’s true that Hatch has befriended plenty of Democrats, his action is predictably partisan. He, for example, floated Merrick Garland as a possible U.S. Supreme Court Justice—until former President Barack Obama actually nominated him. And even as President Donald Trump has struggled to win over the moderate bloc of his party, Hatch has remained loyal. This week, he applauded Trump for pulling out of the Paris Climate Accord, a decision that has baffled and upset many politicians and business leaders across the nation and globe.


At the Thursday night gala, organizers focused on Hatch’s accomplishments and successes.


Zion Bank President Scott Anderson lauded Hatch for his accomplishments as a senator and an attorney before that. He noted Hatch’s “good work, generosity and kindness of heart.”


Musician Kurt Bestor played his popular “Prayer of the Children.”


M. Russell Ballard, member of the LDS Quorum of the Twelve Apostles, also shared remarks about Hatch’s career and friendship.


Perhaps more inspiring than Hatch’s story are those of the scholarship recipients, such as Tiana Brown, one of three high school graduates who attended the dinner. The BYU Management Society, which has 90 chapters throughout the world, awarded 54 scholarships total this year to seniors who will attend nine different colleges or universities in the state. All proceeds will fund need-based scholarship for high school seniors in Utah.


Brown helped make blankets for the Salt Lake Refugee Center, performed Polynesian dances at retirement homes and tutored fellow students in math and English. Last year, she was diagnosed with stage 3 ovarian cancer and later stage 4 small cell carcinoma. She underwent multiple surgeries, six rounds of chemotherapy and six weeks of daily radiation. She is passionate about technology and plans to become a computer engineer.


Incoming University of Utah freshman, Solomon Araya volunteered as a referee in a youth soccer league, a math aid, and an interpreter for Utah’s Ethiopian and Eritrean communities.


“Crossing the Eritrean border was the most difficult and unforgettable moment of my life. The military can kill you if they capture you,” he wrote in his scholarship application. “I made a promise to my mother that I will work hard and change our lives. She wants me to go to school because she never had the opportunity. She knows the value of education.”


Bayartushig Tsogtbaatar hopes to one day be a pediatrician. In her youth, she participated in the National Honor Society, the Key Club and Global Volunteers, and she volunteered at a refugee kitchen and helped make blankets for hospitalized children and went on a humanitarian trip to Cuba.


Tsogtbaatar wrote in her application: “My mother brought me to the United States from Mongolia when I was around 6 years old. We had no clue how to speak English, but she knew how imperative it was for me to receive an education. The strength of my mother gives me purpose to succeed.”