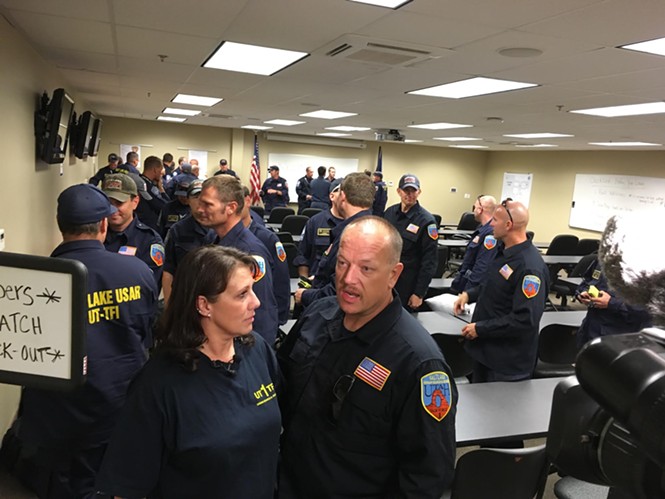 For more than two weeks, Shauna Lawrence has only really been able to talk to her husband, Steve, late at night and over the phone. And even then, she said, she tries to keep the conversation light so as not to stress him out. For good reason: Steve Lawrence—a member of Utah Task Force One that was sent to help out in Hurricane Harvey-torn Houston—had been running off the fumes of four-hour sleep nights.

“It’s tough. It’s always hard to have your spouse gone. It’s also tough to have them gone when they’re in a natural disaster. You worry about them,” she said Wednesday night from a United Fire Authority logistics warehouse parking lot in West Jordan where she and other members of the task force waited for the 46 deployed members to return.


Shauna Lawrence is a UFA administrative assistant and her husband, a UFA engineer, served as a logistics manager on the mission.


Moments later, a convoy of about 15 vehicles pulled in. Before the truck pulled to a stop, she strode up near the door her husband emerged from, and the two embraced.


“We got flushed out of three different staging areas, initially,” Steve Lawrence said. “The next morning, those staging areas were covered in about two-to-three feet of water, so we had to keep moving from area to area until we could figure out a base of operation.”


Adapting to the rising waters, the team, which left Utah Aug. 25, got to work.


Almost two weeks later, they returned. They debriefed for several minutes before cutting them loose to their families.


“First of all: welcome home,” said Capt. Bryan Case, the interim program manager. “It’s awesome what you guys did. It’s an unprecedented thing on behalf of this task force. You guys made a difference that this task for has never been able to make in the past.”


After making it south, the team immediately began helping with evacuations and assisted in about 340 rescues, including elderly, infants (the team helped deliver a baby) and pets.


Even before Texas can truly begin its long road to recovery, another Category 5 hurricane is bearing down on the Caribbean and headed toward Florida. “If we’re called on, our guys will go out there,” Shauna Lawrence said.