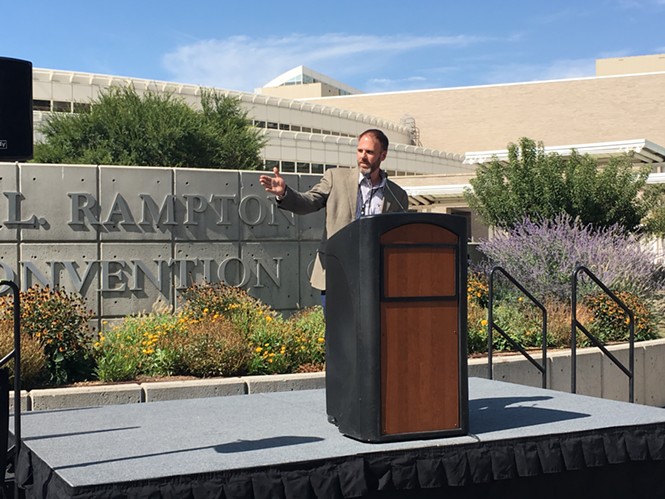 While celebrating environmental achievements, the convention industry is fighting against a doom-and-gloom narrative caused by the Outdoor Retailer's decision to leave Utah.


The Outdoor Retailer exodus made headlines—in large part because of the public land battle that precipitated the decision—but, Beck noted, many conventions continue to return, several of which have been booked through 2030.


Significantly, one hosted by Global, an essential oils company, has for three years in a row been the largest of the more than 50 events that descend on Salt Lake City each year.


Wrapping up last weekend, convention left a direct economic footprint of about $29 million from the more than 30,000 attendees—94 percent of whom came from outside the state.


“You could smell the lavender everywhere,” Beck said at a press conference outside the Salt Palace Tuesday afternoon.


Kirk Jowers, vice president of corporate relations and European markets of , said the company is proud to bring masses to Salt Lake City and expects the event to balloon.


And drawing people to Salt Lake City is easier when the values of all partners align.


Dan Hayes is general manager of SMG, which oversees the Salt Palace Convention Center and the South Towne Expo Center. He said the facilities recently accomplished a year-long certification process that focuses on environmental sustainability.


“This green-minded partnership came together and identified the Event Industry Council’s environmentally sustainable event standards … as our collective goal,” he said. “We chose this goal as it would have the most impact on changing our everyday processes.”


Upgrades also included a switch to LED lighting, water-saving fixtures installed in the bathrooms and kitchens and a 6,000 piece solar panel array. To commemorate, the south tower at the Salt Palace was illuminated in a green glow Tuesday evening.


Encouraged by the rippling economic impact, Salt Lake County Mayor Ben McAdams anticipates real environmental improvements. “Salt Lake County is not just talking about going green, as the state’s largest meeting host, it is leading by example, as we see with the sustained effort by groups that host and operative facilities where large meetings and conventions gather,” he said.