Panel focuses on importance of women in politics.

Carol Surveyor, a member of Utah League of Native American Voters and congressional candidate for the 2nd District, says her mother’s death propelled her into the political sphere.


Surveyor’s mother was slain on a reservation in 2015, and she was buried near Bears Ears National Monument. In mourning, Surveyor decided to move to Salt Lake City to shake her despair and find a community of her own.


“My passion is community organizing and being an activist,” she says. “Standing up for what I believe in, that I’m passionate in. That’s how I got started.”


She told new friends about her mother, but she also listened to their stories, heard their hardships and tragedies. The day she decided to run, she was at a Bears Ears rally protesting President Donald Trump’s executive order asking the Department of the Interior to review a number of national monuments. A Navajo elder spoke at that gathering, saying she worried about the land, water and air on the reservation.


“Through her words, it sounded like my mom was talking to me,” Surveyor says. “She said, ‘Please somebody, someone out there, please help us. Help us. Do something.’”


That’s when Surveyor knew she wanted to make a difference by representing in Congress those downtrodden voices she’d met along her journey.


She shared her story before a panel discussion Monday evening that focused on women in politics.


In partnership with Alliance for a Better Utah, it was the first in Impact Hub’s line up of events for its inaugural Women’s Week. On Tuesday night, the Hub will host a cultural exchange. Wednesday night’s event will focus on women in tech, and the panel Thursday will feature women in business. 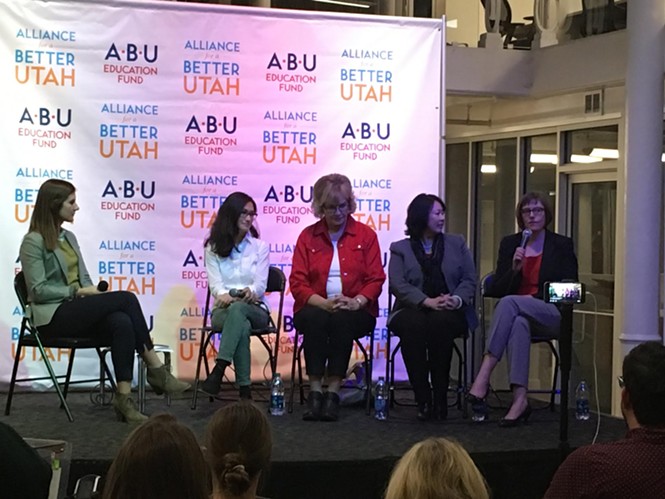 
Women make up only about 20 percent of the seats in the Utah Legislature. Boyer asked those on the panel who held office, what made them decide to go into politics and what could encourage other women to get their names on the ballot.


Allen ran in 1994 with no encouragement. “We know now from research that I was the exception,” she said. “What research validated is that more women are likely to run if they are encouraged to do so, even recruited. We also know from research that women gain confidence if they get training, particularly on fundraising and organizing and expectations.”


“It’s really that practical, on the ground nuts and bolts training and advice for actually getting out and doing it,” Jemison said.


Kwan said for several years, she was recruited to run for office but continually turned down the offer.


“Finally, in 2014, I was recruited seriously to run. I was told, ‘Don’t make a decision [yet],’” she said. Between that moment and the filing deadline, she was called by “everybody and their mother” pleading that Kwan run for the Legislature.


She agreed when the Chinese community reached out and told her that they supported her and needed her voice to be heard on the hill as a member of an underrepresented minority.


“We’ve had Chinese people in Utah for 150 years, and we’ve never had a voice at that level, and you’re the one to do it,” she recalled.


Stone, who also founded the Women in Politics organization at Brigham Young University, recounted a statistic she learned from a political science professor in college: “Once women’s names are on the ballot, they win at about the same rate as men. They just have to get on the ballot,” she said. “Getting on the ballot is most of the battle. From there, certainly it’s still an endeavor, but you can win at the same rate as men do. Please try. And I’ll try to be there with you.”