Initiative is a transit/air quality partnership. 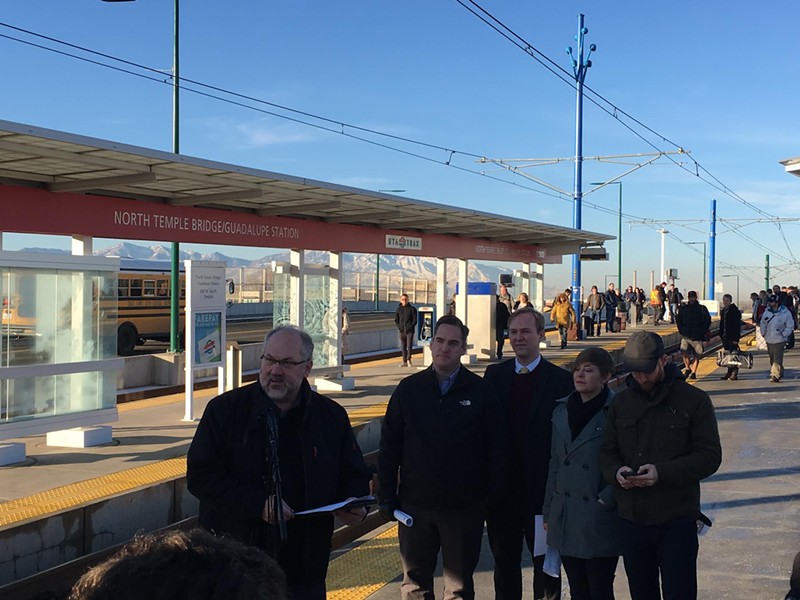 It’s the worst air days, the ones where you can feel particles lining your lungs with each inhale, that make you squint toward the obscured sky and ask, Why can’t we get more people off the roads?


Indeed, why can’t public transit be free on red-air days? That’s a question City Councilman Stan Penfold has mulled over.


“It’s one of the most frequent questions I’m asked,” Penfold said Tuesday morning during a news conference on a North Temple viaduct.


Utah Transit Authority CEO and President Jerry Benson said the answer is straightforward: The operating costs can’t be paid without the fare money.


But if it were free for one day, folks who can afford the transit system but haven’t figured it out yet might be incentivized to hop on board.


“What you hope is this free fare day will entice people to figure out the train schedules, figure out how to get out of their car and use transit,” McAdams said. “And while this first day is free, they’ll figure out we’ll actually save money, and it’s convenient and a pleasant way to get to work. It will start changing habits.”


McAdams said he and his children will be using the transit system on Friday to get to school and work.


All rides in the UTA network, a six-county district from Payson to Brigham City and Tooele to Park City, are free.


“I wanted to highlight some of the things we can do,” Penfold said. “And that is to ride transit. The Wasatch Front has one of the most comprehensive transit systems in the nation, especially for a metro area our size. It’s pretty incredible what we have.”


The city council, county mayor’s office and UTA are underwriting the $70,000 cost. That dollar amount represents the cash fare collected on an average weekday. On a typical day, Benson said, about 160,000 riders board a train or bus and about a quarter of those pay cash fares, which doesn’t include people who have passes through work or school.


The Free Fare Friday partners are gearing up for a jump in ridership.


“This Friday we encourage everyone to ride transit if they can. Ride Frontrunner to work, take the bus to school, jump on Trax to come downtown,” Penfold said. “Finish your holiday shopping, see the lights, go to a movie, have dinner at your favorite restaurant, it’s that simple. All day this Friday, your ride is on us.”


No cash fares will be accepted, signs will be posted at train stops informing riders they don’t need to pay and riders with electronic passes won’t need to “tap on” and “tap off.”


“The truth is, we have no choice but to keep finding ways to reduce vehicles emissions and particulates that they pump into the air,” Benson said.