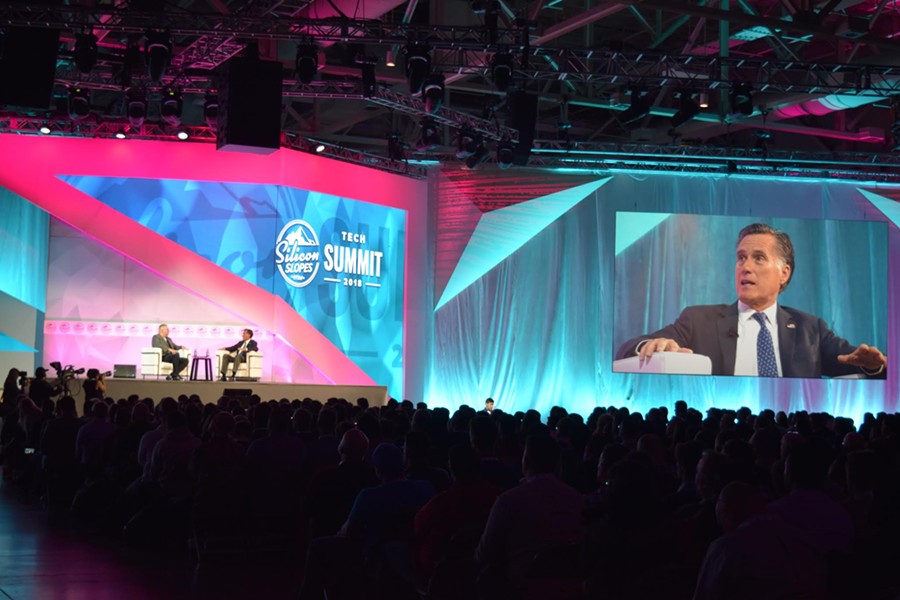 For someone not currently running for U.S. Senate, Mitt Romney isn’t shying away from the spotlight.


On Friday, he delivered the keynote speech at the two-day Silicon Slopes Tech Summit at the Salt Palace, and, true to form, he shied away from any announcement of a potential Senate campaign.


That’s not to say he didn’t address the elephant in the room right off the bat.


“Let’s start with a hypothetical here,” said Alex Dunn, president of Vivint Smart Home, to Romney. “Hypothetically, let’s just assume or pretend a lot of people are waiting to hear you make some kind of announcement—hypothetically‚would you be making that announcement in the next 30 minutes?”


Romney responded with a little humor.


“You know enough about politics to know that you would never make a critical announcement on the week the Mormon Church just named the new president ...” Romney said. “And, when it’s a Friday—of course, you only put out bad news on Fridays—and No. 3, when someone lights a gasoline truck on fire on I-15.”


Romney was referring to the truck that caught fire on I-15 Thursday night and shut down the freeway for hours.


Since Sen. Orrin Hatch announced in early January he would not run for re-election, Romney’s name has continually popped up in discussions for potential successors.


On Tuesday, Romney spoke at a Salt Lake Chamber of Commerce event where he discussed “how much Utah has to teach the nation,” according to a Salt Lake Tribune article. When asked about any potential Senate run, Romney said, “I have nothing for you on that topic.” He even outlined some areas he thinks would be Congress’ toughest challenges, such as immigration, poverty, education and climate change.

“If you’re not afraid and if you go into an enterprise where you’re not worried, you’re not being bold enough" –Mitt Romney click to tweet

Sens. Hatch, R-Utah, and Jeff Flake, R-Ariz., also were scheduled to speak at the tech summit but canceled because of budget negotiations in Washington.


So, Romney spent about 40 minutes extolling the challenges and successes he’s had in the business world, as leader of the 2002 Olympic Games and as governor of Massachusetts.


“I was afraid that we would not be successful and we would lose people’s money and they would be very, very harmed by that,” Romney said about his time with Bain Capital. “Likewise, when I was asked to come out here [Utah] and take the reigns of the Olympics, I was very, very concerned that we would let down the people of Utah, the people of the country, the athletes that ended up coming to the Games here and performing here where they had been training for years, I was very concerned about that.”


But, Romney said, don’t be afraid of failure.


“If you’re not afraid and if you go into an enterprise where you’re not worried, you’re not being bold enough,” he said. “You gotta have a vision that says, ‘I’m going to do extraordinary things—I might not get there, but I’m going to try.’”


The answer on whether Romney will seek a Senate seat, though, will have to wait.


“I actually ran for president and lost,” Romney said. “So, the fear of failure was actually realized.”