The Man, the Mitt, the Legend | Buzz Blog

The Man, the Mitt, the Legend 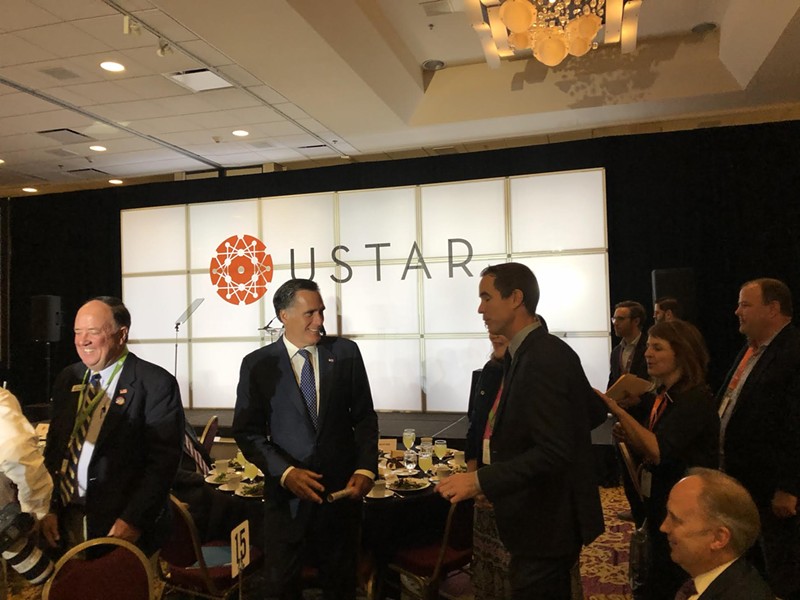 Utah Senate hopeful and  former Mass. Governor Mitt Romney offered his thoughts on economic growth, reflected on his past and even told a dad joke in his keynote address Wednesday afternoon at the first annual Utah Technology Innovation Summit.


“I had the occasion, when I became a governor, to understand what it was that created economic vitality for the state of Massachusetts, where I lived,” the 2012 presidential candidate said, transitioning from being Mass.- to Utah-minded. “States compete. And so it’s important for us here in our state to find ways to attract the best and brightest, and to attract the kinds of jobs that will provide for our young people the skills that they need to be able to have a life that is as wholesome as possible.”


Romney told the lunch-eating crowd gathered at the downtown Marriott that he learned the “states compete” lesson when Arnold Schwarzenegger, another Republican governor, tried to “poach away” jobs and companies from Massachusetts when the two were in office. “He put up billboards around Massachusetts with him in a T-shirt going like this, going, ‘Come to California,’” Romney said. “Not to be outdone, I put up billboards outside the airport in his state, with me in a T-shirt flexing my muscles, and I said, ‘Come to Massachusetts: Smaller muscles, but much lower taxes.’”


Hosted by the Utah Science Technology and Research Initiative, the summit brought together policy makers, innovators and entrepreneurs to talk about why technology is integral to Utah’s economy and how it can help the state continue to compete in the global economy. Gov. Gary Herbert, Lt. Gov. Spencer J. Cox and Salt Lake County Mayor Ben McAdams also participated, either giving speeches of their own or participating on a panel. Governor’s Science Medal Awards were also given to industry leaders in K-12 education, academic/research and industry, as well as a lifetime achievement award.


In his speech, Romney said there were four major global competitors for world leadership, the winner of which will “affect our lives and the lives of our grandchildren for a long, long time to come”: the U.S. and the West, China, Russia and “radical, violent jihadists.”


“This is not about making money. Nothing wrong with that, but that’s not what it’s about,” Romney said. “This is about preserving freedom. Because, again, we’re in a competition. And the competitors—Russia, China and the jihadists—don’t have freedom in mind. They have dominance and oppression to a degree in mind. Only if the West, and if America, who leads the West, succeeds, can we be sure that our grandchildren, and theirs, have the kind of freedom that allows us to have the lives that we aspire to live.”


Herbert gave a short speech of his own before Romney’s, praising technology and innovation for improving people’s quality of life. “We have better lives, less drudgery, higher quality, better health, cleaner air, cleaner water, the list goes on and on, because of innovation in science and technology,” he said, praising Utah for its technological innovation and stressing the importance of continuing that spirit of innovation in the future. “Our challenge now, really, is to keep up,” Herbert said. “You have to run to keep up with your competition.”


“It’s an exciting time,” Romney said at the end of his speech, “and I’m delighted to be in a state that is leading and thinking strategically and investing in the long-term.”