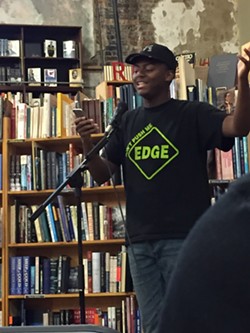 For a would-be artist, it can be a challenge convincing your parents that you can make a living doing that work, and that you don't need to "get a real job." Now imagine being an environmental engineer with a master's degree, and telling your mom that you plan to quit your job and go on tour as a poet.

"That was one of the worst conversations I’ve ever had in my life," says Ryan Jones, an Atlanta-based spoken-word artist and Mercer University grad who has been performing at the Utah Arts Festival. "I come home after quitting my job and it was like, 'Hey I have something to tell you.' And she was like, "'We’re not talking about this.'"

It was only six months ago that Jones—who performs as Ryan J.—took the leap of leaving his job at an environmental consulting firm. He had been writing and performing poetry since his freshman year of college, but was finding that his job was making it difficult to pursue his art.

"I woke up one day, contracted to go out to the landfill, and it was like, 'I hate this,'" Jones says. "Work was getting to the point where it was making me choose between committing to engineering and not doing this art. I thought, 'You know what, I have to do what I have to do, go full force into it.'"

"I was a bad employee," he adds with a laugh. "There’d be points where I’d leave early from my job in order to make a performance that I was contracted for. Or if somebody was like, 'Hey, we have a Saturday job, can you do that,' I’d be like, 'No.'"

So at the end of January, Jones left his job and immediately hit the road for a tour with his friend and fellow Atlanta poet, Nate Mask.  Over a two-month stretch, he visited Salt Lake City, Orlando, Washington, D.C. and several cities in the Pacific Northwest.  Another month-long tour in May took him to Nevada, Idaho and Northern California. He estimates that since leaving his job, he's spend maybe three weeks sleeping in his own bed.

While most writers might consider different mediums for turning their work into a career—whether that might be fiction writing, songwriting or even stand-up comedy—Jones believes he's found the right form for what he wants to do.  "I’m still trying to venture more the 'paper realm' a little bit," Jones says, "but I always felt like I connected to more audiences and connected to more people while performing my own work and being on stage and having choreography in my work. I think it brings people to the art a little better; you get the actual person with the work."

And yes, he's actually managing to make a living doing it. Jones estimates that so far he's making $2,000-$3,000 a month from his contracted performances and selling books of his poetry and merchandise, which isn't far removed from what he was making at the job he quit in order to do it. There's even more potential for income on the college circuit, for writers and spoken-word artists brought in for student programming.

That should make Mom feel a little better, and Jones says that his mother is now "as supportive as she can be. I think it’s tough to see your kid that you thought was on a path to success in one thing, and to see them switch paths completely and try something relatively new to a ton of people."

For now, he continues with a vagabond artistic life that will take him next to a week in Denver. "I don’t think touring constantly is going to be the end of the road," Jones says. "I think there’s something that lies beyond that, but I’m not entirely sure what that is yet. And I think that’s both a terrifying and exciting thing."