Local group still gathers once a month to protest the U.S. war involvement. 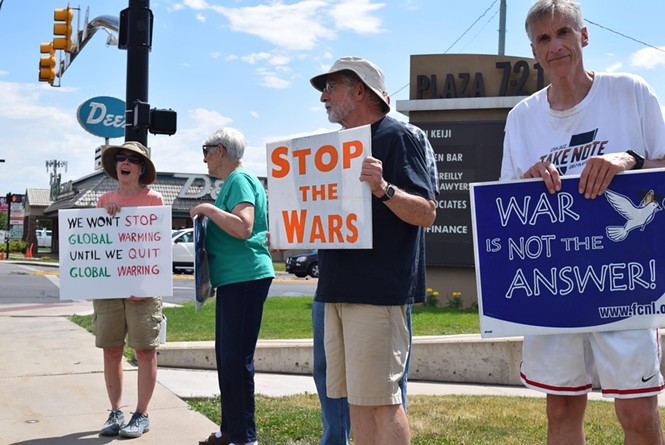 No matter how big or how small, Diana Hirschi and her colleagues make an effort to stand on a corner in Sugar House once a month to remind the public of America’s war involvement.


“I’m so concerned about the state of the nation and the constant wars that we engage in all over the earth,” Hirschi said, standing on the corner of 700 East and 2100 South. “I feel one thing I can do is bear witness to those wars and remind people we’re happening—I wish there was more I could do.”


Hirschi, who was joined by her husband about four other friends, said her war protesting involvement stretches back as far as the Vietnam War. When the U.S. got involved in the recent wars in Iraq and Afghanistan, they started holding weekly vigils at the Federal Building downtown. About five years ago, they moved to their current location where they gather on the first Saturday of each month.


“I am surprised that it’s gotten worse,” Hirschi said. “I thought it would be different now.”


Aside from a rainstorm or two, they’ve been out at the corner each month holding signs that say “War is not the answer,” “Stop the wars,” and other phrases encouraging peace.


Meherban Khalsa, who held a sign with the message, “We won’t stop global warming until we stop global warring,” said she has a son and daughter-in-law in the Utah National Guard and wants people to be cognizant of the wars even if they’re not making daily headlines in local news. In some ways, she says, “she’s out there for them.”


“America is in the Middle East,” Khalsa said. “And I think a lot of Americans forget about that.”